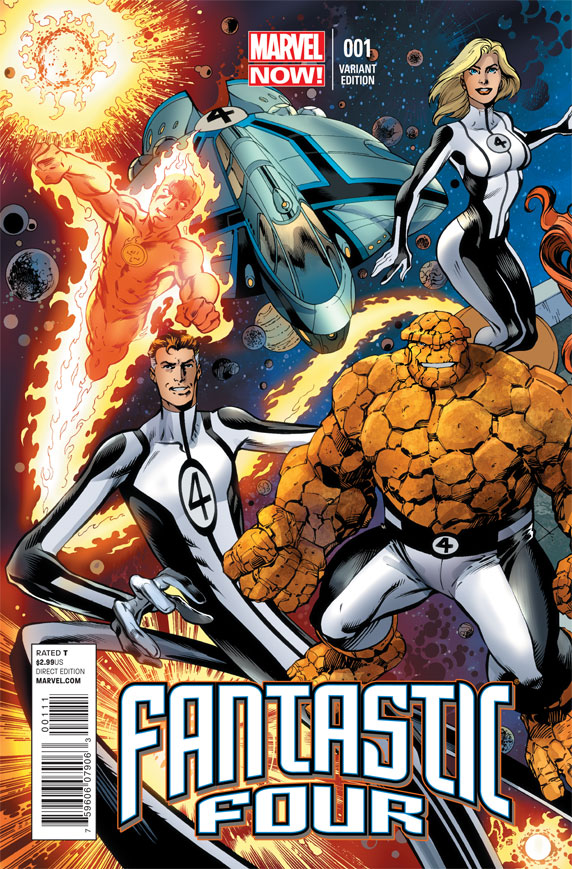 Hickman's run on Fantastic Four is a tough act to follow. Not only was his tenure of phenomenally high quality, but he made the book and the characters relevant in a way that I would argue they haven't been since the Lee/Kirby days. Never one to shy away from a challenge, Matt Fraction steps up to take on Marvel's first family with a run that looks to be more focused on the core group and high adventure.

After a disastrous trip to the past in which Reed makes a startling discovery about the groups' powers and misses a crucial moment where Franklin really, really needs his parents, Reed decides that a family road trip. Although this being the Fantastic Four, it's going to be a roadtrip through unknown universes and time periods as the Fantastic Four show their kids the wonders they see on a daily basis, and Reed secretly searches for answers to a deadly problem.

Fraction really nails this cast and shows his impressive grasp of the characters in a small number of pages. This is a very quiet issue chalk full of character moments that focus on the group's core six members. Whether it's Sue quietly making her round to check on the Future Foundation kids or Franklin reminding the reader and his parents that for all his vast power, he's still just a little boy, Fraction establishes a real human connection to each character. Likewise his trademark sense of humor is on full display, especially in the scene where Johnny gives a very unexpected present in a little black box to his starlet girlfriend.

My only real issue with the characterization in this issue comes from Fraction's handling of Reed. While he nicely sidesteps worries that some fans might have had that Reed would come off too much like Tony after Fraction's long tenure on Iron Man, another concern rises to take it's place. Fraction returns to a well that is almost too well trodden for FF readers, that of Reed keeping secrets from his wife and family. So many runs on FF have given us the character arc of Reed doing this, it blowing up in his face, realizing he should have trusted his family all along, and vowing to do better that it really feels like back sliding each time we return to the idea. I get that Reed is confident that he can fix the problem, but he should really tell the others or at least just Susan. However this being the first issue there is still plenty of time to rectify this specific concern.

Mark Bagley is such a perfect fit for Fantastic Four that you kind of have to slap your head for not considering it before. Ultimate Spider-Man proved that Bagley is the master of scenes that amount to mainly character interaction, and given that Fraction will definitely be playing with the family dynamics, especially those that come into play during the confined and extended circumstances of a road trip, Bagley's talent will definitely be put to use here. Additionally, I really love the way Bagley draws the Thing, looking a title rougher than some recent interpretations but still displaying very human emotion.

A great first start to what I'm sure will be a stellar run. Those who discovered these characters through Hickman's work should definitely stick around, as Fraction's love for and understanding of them is on full display here, and Bagley's involvement means the book will boast an artistic consistency and excellence to rival most other titles on the stands.