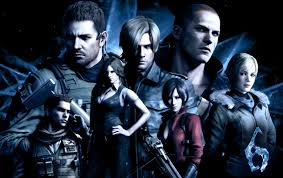 I really tried to make my first review on RTBN positive. I really did. I figured, hey, new guy in town's gotta make some fraands, let's not be the group Debbie Downer! So I picked Resident Evil 6 as my first review, with its ambitious 3-campaign intertwining plotline and prestigious series history. It's gotta be a winner, right??

And while I tried to go into this game with an incredibly positive outlook, I was greeted with the line, "Hard to find a good steak around here!" and a character who looks suspiciously modeled after Ryan Lochte.

For all its ambition and polish, Resident Evil 6 feels like it's trying to please everyone and ends up leaving each fan-base with a lot to be desired. Instead of providing one cohesive experience, it provides three separate ones, further fractured in pacing with an overabundance of quick-time events and, the worst offense of videogaming, SCRIPTED UNAVOIDABLE DEATHS.

The stories behind the Resident Evil games have never been the series strong suit, but the new innovations this game introduces to the series in storytelling is actually one of the games highlights. The plotline is typical enough: Bio-terrorism still runs rampant the world thanks to terrorist groups like Umbrella (which is surprisingly still afloat despite the"¦3? 4 deaths of Albert Wesker? Ahh who's keeping track of his death count anymore). As a counter-measure, U.S. President Adam Benford officially reveals the events behind Raccoon City, hoping that, by showing how the T-virus effectively destroyed the city, it will increase awareness and provoke governments around the world to provide stronger defenses against bio-terrorism. This effectively ties fan-favorite heartthrob Leon Kennedy from RE2 & RE4 back into the story as an aide to the President, having survived the events in Raccoon City himself. But things start going awry once a President-hosted venue for bio-terrorist awareness becomes host to the next bio-terrorist attack, leaving Kennedy and newcomer US Secret Service Agent Helena Harper to determine who was behind the attack. After Kennedy is forced to kill the infected President himself, he discovers through the help of old friend Ada Wong that Umbrella is back as Neo-Umbrella, and plans to quell Bio-terrorist awareness using the C-virus, a newly developed weapon that turns humans into"¦well, that goopy monster stuff we shoot in every Resident Evil game.

Meanwhile, Bio-terrorism Security Assessment Alliance (BSAA) Agent and tanks-for-biceps Chris Redfield is leading a team in South-Slavic Edonia to combat the Edonian Liberation Army (ELA). After hired mercenary and 3rd plotline main character Jake Muller unknowingly provides ELA members with shots of Neo-Umbrella's C-virus, Redfield and his team are overwhelmed by the newly created Bio-Organic Weapons (BOWS), led by none other than Ada Wong (GASP! TWIST!!). Cut to Redfield months later who leaves BSAA and has drank his memories away, only to be called to duty again by Piers Nivans, surviving teammate of the ELA BOWS attacks and RE newcomer 2.

You play Resident Evil 6 three times as 3 different characters (Leon, Chris, and Jake), each with unique perspectives of the same events. Each campaign offers a different overall feel. Leon's story goes back to Resident Evil roots with a more horror-survival, pop-out-from-nowhere-scares sort of feel. Chris' story feels more like what we've recently seen from the series, as horror takes a backseat to fast paced action-oriented sequences. Jake's story is an intriguing hybrid of the two in which he and his companion Sherry Birkin from RE2 are constantly fleeing from BOW Ustanak. In short, Leon's story is a horror movie, Chris' is an action movie, and Jake's is a thriller.

The three storylines also consistently intertwine. Often you'll revisit scenes from a new angle that gives said scenes an entirely new context. After playing all three campaigns, you'll unlock a hidden fourth campaign that provides even more context to the game's previous scenes (and provides well-needed character justice for one of my favorite characters in the series, Ada Wong).

While Capcom's ambition for this new storytelling technique is certainly something to applaud, their execution falls a little flat. Instead of sticking to one prevalent theme throughout all three campaigns, Capcom tries to appeal to horror fans, action fans, and shooter fans separately per each story, and while plotlines meet at various points, the tone of each stories clashes with the other. I can't recommend jumping around between the three characters because of this jarring disconnect, and because of that, you're playing the three stories one at a time. In the end, it feels as though you're playing three smaller games, and not one cohesive game.

The characters within said stories also left a lot to be desired. It was amazing to see Chris in a state of emotional weakness you could actually believe in for the first time. Chris' muscles are the size of my Toyota Corolla, and his demeanor in the past RE games would have you believe that he values a militaristic style of life. So instead of the contrived instances of emotional pain he's gone through in the past with Jill Valentine, his previous partner that he must love because they fight zombies together or something, he's hurt because HE'S RESPONSIBLE FOR GETTING HIS MILITARY UNIT WIPED OUT. And yet despite Capcom's first believable RE character arc falls incredibly flat, with the resolution essentially amounting to, "Well, he got over it after some time."

Leon Kennedy also suffers from some character pains in terms of writing. He's been through 2 games now where his character arc is basically him overcoming his fears cemented into him via the Raccoon City incident. Take a wild guess as to what his character arc is in RE6. And don't get me started on Jake or any of the new sidekicks. I'd feel more for them if they weren't walking stereotypes that'll just get sidelined forever after the game's over (Sheva who? What was the name of that fat guy from the 3DS game??).

In the end, you have to applaud Capcom for trying. This is the first deliberate attempt to create a story outside of their comfort zone for the Resident Evil series. However, while storytelling innovation is there, execution is not, as I sit here wondering if there was a bet between the three campaigns' lead writers as to who could hit the most horror movie clichÃ©s in one script.

If you're looking for a horror-based shooting game with a good story, this game is sadly not it. The gameplay is solid and a definite improvement to RE5's system, but storyline isn't a selling factor to drive you through the content.

*Gameplay from RE5 is back, with a few kinks ironed out. For the first time in the series, you can FINALLY move as you aim your gun, something we've learned to do since the 4th grade when we first shot our friends playing laser tag.

*Equipment management has also been streamlined in this game, as you now share ammo and essentially have unlimited access to it and various guns. While it makes RE6 a lot more accessible to newcomers, I do kind of miss having to ration supplies and mitigate weapons strategically. It definitely added to the horror-life feel of the movie, as, holy crap, we can actually run out of things to shoot things with.

*Incredible action pieces are the game's strongsuit, fans can tell RIGHT AWAY who Jake Muller is the son of, just based on his matrix-like moves. Now if only he could teach me how to Dougie"¦

*Voice acting is top notch, despite shoddy lines. I nearly cried at the delivery of the aforementioned steak line. Did you know Chris Redfield's voice actor, Roger Craig Smith, is voicing Sonic the Hedgehog in Wreck-it-Ralph? Talk about vocal range.

*I'm getting really tired of these 1-and-done RE campaign characters. Jake Muller's cool enough, but Claire Redfield, Jill Valentine, or any past character would've been more welcome for RE6's ensemble cast.

*Thank GOD for that fourth campaign. Fans of Ada Wong will see what I mean.