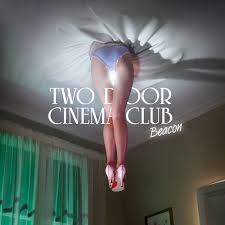 In 2010, Two Door Cinema Club released their debut, Tourist History, which immediately won me over with its hybrid of dance-rock reminiscent of Franz Ferdinand, Bloc Party-esque impressive guitarwork, and singer/epic ginger Alex Trimble's radio-friendly voice. In the span of one album, the Northern Irish trio had created a very defined and catchy sound for themselves, and I wouldn't have minded another album just like it.

Beacon is not a repeat of Tourist History, nor is it a complete departure from its sound. Alex Trimble's voice is just as heartwarming as ever, the unconventional indie rock guitar sound is still there, and the beats are still dance-y. However, gone are the hi-hat heavy and high tempo dance-rock tracks, replaced with more overt electronic influences and somewhat gentler melodies.
Beacon opens with the anthemic "Next Year," a song that really epitomizes this different sound. It has a dance-rock beat, peppered with synthesizer bleeps and bloops, and a strong high-pitch lead guitar. Trimble's vocals are at their most pop-sounding here, especially towards the end, and the lyrics begin the motif of feeling homesick with the "I'll be home for next year" chorus. While not a bad track, this is no opener like the frantic "Cigarettes in the Theater" off the debut, a track that is fairly hard for me to sit still for. Second track "Handshake" might be my favorite off the album, and is one of the most electronic-heavy tracks on Beacon. The powerful chorus and energetic drum beat at the end definitely make it one of the livelier tracks on the album, and it would be at home on Tourist History.

Third track "Wake Up" has a similar sound to "Handshake" and while not a bad track, they can blend together at times. "Sun," has a funky beat and a random horn section that kicks in about halfway through, a new sound for Two Door Cinema Club that might be divisive for fans. Fortunately, "Someday" goes right back into their classic sound as the fastest track on the album, and is a fairly straightforward indie rock song along the lines of "I Can Talk" off the debut.

About halfway through the album things cool down, starting with single "Sleep Alone," which goes between being subdued and semi-energetic, never really taking off. "The World is Watching" is even more mellow, and its over-the-top chorus of "I want you with me" makes it sound like a song from a so-so electropop group. "Settle" again features the now-formulaic divide between mellow and lukewarm energy while rehashing lyrics of homesickness, and is followed by the unmemorable "Spring." While these songs may have occasional flairs of potential and all have interesting enough beats, they do tend to blend together.

Second to last track "Pyramid" kicks up the energy after this slump with its somewhat heavier guitars, yet this energy is sucked away by closer and title track "Beacon," which goes between a standard chorus and echoed vocals before ending with the lyrics "I'm coming home" to end the homesick saga.

While Two Door Cinema Club may not have wanted to make another Tourist History, in their attempt to create something new, they created something even more formulaic. Beacon does have its moments of greatness, mostly towards the beginning of the album, but these are generally high energy dance-rock tracks that could have fit in well on Tourist History. While I don't mean to sound as if Beacon should have stuck to what was successful before and that Two Door Cinema Club shouldn't change or evolve, I also feel as if this album wasn't the band living up to their full potential.