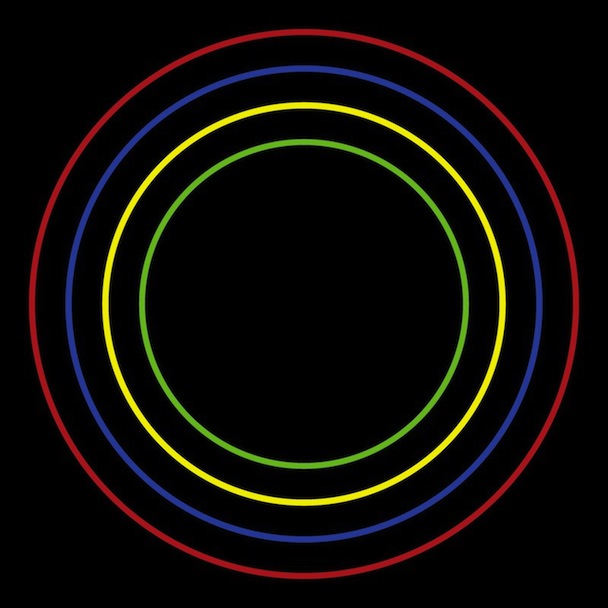 Alright, here's a brief history of Bloc Party. Everyone loved debut Silent Alarm, which was powerful indie rock that was in no way conventional. They repeated this for A Weekend In The City, which was more ambitious and tried to be more mature yet was seen as inferior to Silent Alarm. Then out came Intimacy, which was fairly divisive based on how you felt about electronic music (I liked it). Frontman Kele Okereke then made an electronic solo album, The Boxer, which revealed that he was the one behind Intimacy's synth parts, and the band fell off the radar for a few years.

Now with Four, I had no idea what to expect. A return to the off-kilter rock of Silent Alarm and A Weekend In The City? Or more keyboards and drum loops a la Intimacy?

The album's first track "So He Begins to Lie" answers this immediately with its soaring guitars- the former. Gone are the electronic influences, and now Bloc Party is gonna do straightforward rock. But how straightforward exactly? While Four tries to reproduce the successful sound of Bloc Party's first two releases, it ends up being both formulaic and all over the place.

First, Four has a slew of hard rock songs. On the first few listens, I felt Four rocked harder than any other releases. However, I then realized that Bloc Party had never shied from being heavy at times - "Halo," "Song For Clay" and "Uniform" all featured fairly guitar-heavy intense moments that never felt generic. On Four, second track "3x3" fits this description, with its guitars giving an odd sense of urgency. However, there are three other heavy songs on the album that seem to use the same generic guitar sound. The riff of "Kettling" impressed me at first, but after repeated listens sounds like it belongs in the 1990s hard rock scene, not a Bloc Party album, and is only saved by its really impressive solo. Short number "Coliseum" starts with an out of place country tune before exploding into a frantic guitar part a minute in. Lastly, closer "We Are Not Good People" is heavy and high energy throughout. These three tracks are a bit of a new sound for Bloc Party in how straightforward they are. They're not that bad really, but they also aren't the unconventional rock sound that drew me to Bloc Party either.

There's also a couple of math rock songs (or at least I'd say that's the best description of them). First is the single "Octopus," which while I really enjoy for its stuttering guitar and impressive drumming, sounds like it's holding back a little - maybe its Okereke's vocals. Second is "Team A," sounding quite a bit like "Octopus" yet throws in a heavier guitar part at the end. Maybe I've listened to Foals too much, but these two may be my favorites from the album and I wouldn't complain if Bloc Party did a whole album like this.

Then there are of course Bloc Party's ballads- they've always had a decent amount of softer, heartfelt songs on their album, such as "Blue Light," "Kreuzberg," and "Signs" that were wedged between the more energetic rock songs. Four features "Day Four" and "The Healing," neither of which seemed as memorable as any of the quieter songs on previous releases.
Lastly are the more mid-tempo rock songs that don't fit into any of the above. "Real Talk" is as awkward as they come, and I can't help but think "come on Bloc Party, you can do better" as I hear its same two chords shuffling for 4 minutes. "V.A.L.I.S." is the opposite, and emerges as a real standout track on the album with its dynamic guitar, strong lead and backing vocals, and drummer Matt Tong's trademark quality work. "Truth" also fits this description, yet it's chorus line of "I am yours now truthfully," brings the dynamism down a bit.

While many Bloc Party fans, particularly those that were turned off by Intimacy, may be hailing Four as a return to the classic sound after a misstep, it lives up to neither of the two early albums and has fewer standouts than Intimacy. Songs that try to be really heavy end up being too generic and not sounding like Bloc Party, and songs that try to be the softer Bloc Party from the past end up being unmemorable. In the end, the songs that don't seem to be trying anything at all stand out the most on Four, and Bloc Party does show that they still have a good reserve of potential.