This week's question comes from Jordan, who asks: With Valentine's Day fast approaching, who is your ideal fictional date for the evening?

When Jordan, disgusting romantic that he is, first mentioned this question I thought: well, shit, this is going to be unpleasant. I'm not a Valentines Day kind of girl, really. And it's no easy task, picking from the bevvy of painfully attractive men that flit across the small and silver screen. I'd pick Eric Northman, as played by Alexander Skarsgaard, but apparently he's sort of terrifying and I think he'd probably be bad at dates that don't involve weird psychedelic fairy-inspired sexcapades (not that I'd be against such things, per say, but I'm not a fairy, sooo that could get awkward). And no matter how beautiful Robert Pattinson is, Edward Cullen is really a creepy stalker. Getting out of vampire territory, I could do a throwback and pull in some of the classics, like Robert Redford, James Dean, or Paul Newman as, well, anybody, I guess, but that seems too on the nose. And I won't be so obvious as singling out one Mr. Darcy because, well, that is entirely predictable.

Because I can never pick one answer, I'm going to give two: Dick Diver, from F.Scott Fitzgerald's Tender is the Night or Eric Lehnserr, aka Magneto, as played by Michael Fassbender in X-Men: First Class. To be clear, this is a "date for the evening" and not a "love of your life" kind of answer, because neither of these choices would work for the latter designation. Dick Diver is attractive because he knows how to have a good time, and does so while maintaining an astounding depth. He's a brilliant doctor who moonlights as the French Riviera's preeminent playboy. He can dance, he can drink, and he knows how to woo a lady (if not how to keep her). He always knows what to say in the moment, has a penchant for smooth talk, and, o, did I mention that he's loaded and makes a life out of partying? It's the kind of life that would get old after a while, don't get me wrong, but for one night in mid-February, I think I could handle it. And, if nothing else, Dick would be a fantastic story to tell. 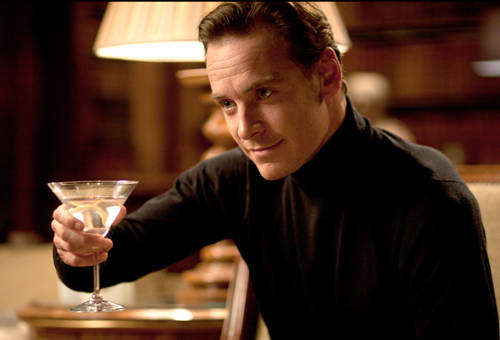 As for Magneto...well, before he becomes a psychotic mass murderer, he is a gorgeous (!!!) badass, sensitive damaged type. But what is more important, and more attractive, than all of that is that he thrives on the idea of self-confidence, notably telling Jennifer Lawrence's Mystique that she is beautiful in her mutant form because that is the clearest essence of who she is. He isn't superficial, and the trait he finds most important is being true to one's self. What isn't to love about that? Plus you can tell from the delightful montage of him and James Macavoy's Prof. X that he knows how to party and have a good time, and seems completely capable of charming the pants (literally) off of nearly anything with a pulse.

First, let me say that I'm surprised that Jordan hasn't already responded to this (it's his own question after all). Because of this I'm going to pick Buffy the Vampire Slayer. I'm doing this to piss off Jordan. I kid, I kid. My real fictional crush is Party Down's Casey Klein played by Lizzy Caplan. Always attached to her cell phone, Casey was kind of a manic pixie dream girl, except for the fact that she wasn't manic or a pixie. She has a wry sense of humor and is gorgeous. Not much more you need. Her will they/won't they with Adam Scott's Henry, pulled at my heart every episode. I wanted to be Henry very badly. I don't really have much to say on this other than: IF YOU HAVEN'T WATCHED PARTY DOWN THERE IS SOMETHING WRONG WITH YOU. It's a great show and each character holds his or her own weight. The show is really based around the Casey/Henry relationship so it's not difficult to fall for her a little while watching. Whether she's kicking ass at kickball or tripping on ecstasy, she's absolutely (perhaps impossibly) charming. She's also far from perfect. There are points in the series when she's kind of a dick to Henry. If anything it just added some depth to the character and made her a bit more realistic. Here is a video that compiled the Casey/Henry moments from the fourth episode of season one where we get the pancake lady speech. It comes the day after Casey and Henry first have sex with each other after finding out about her ending marriage. I suggest watching the whole damn series, but for the clip below, to get to the pancake lady exchange go to about 2:30

In my youth (roughly ages 7 through 14) I was routinely obsessed with fictional men. Usually, I picked tragic figures like Sirius Black of the Harry Potter series, or Spike from Buffy the Vampire Slayer. Some were stupid archetypes, like Jack Dawson from Titantic (a free-spirited hobo) or Mamoru from Sailormoon (white knight with a troubled past). They were all fucked up and entirely undateable in their own ways, and I'm glad that I've evolved past this impulse to fix broken people.

In my more recent enlightened state, I can say with confidence that my ideal fictional character date would be with Ron Swanson from Parks and Recreation. Observe:

1. A date with Ron Swanson would almost definitely take place in a restaurant serving breakfast food. We all know that breakfast is the best meal of the day, and I would be delighted to order eggs and bacon and waffles for dinner.

2. He enjoys bowling. I love bowling.

3. Ron Swanson is very manly. If I needed anything fixed in my apartment after dinner, he would be happy to do it, and he would have his own tool kit at the ready.

4. Ron does not bother with pithy, idle conversation. I'm a terrible small-talker and I hate unnecessary interaction, so the date would only consist of the conversation we both deemed meritorious.

Alas, as I am not a brunette, I doubt Ron and I would have a future. But he would be a consummate gentleman throughout our evening together, and I would probably learn a lot about marksmanship and libertarianism.

THERE IS NOTHING ELSE TO BE SAID.

Looking at other's entries into this reminded me that this is "Date for a Night" and not "Love for the Rest of your Life" which made my decision much simpler. For the record, if this was spend the rest of your life with someone, I would have to go with Wichita from Zombieland because EMMA STONE. But! Since this is a one night thing I have to go with"¦.Mary from Total Recall"¦better known as the three-boobed prostitute. Three boobs. Three of them! BOOM, done.

Looking at this as a Valentines Day date night, I would probably go with Veronica Mars.

Veronica has a razor sharp, blood letting wit, which is probably my number 1 turn on and the fact that she is a borderline genius and devastatingly hot doesn't hurt either. However I would stress that this is my answer for the Valentines Date ONLY. As a relationship with Veronica Mars would lead to me obsessively sweeping my room for listening devices, developing an office chair like swivel in my neck from constantly checking my six to see if I was being tailed, getting punched by the occasional biker, and knowing that I can never, ever, ever screw this thing up because my girlfriend is keeping a file the size of a phonebook on me in a safe somewhere.

However, if this is the sort of date that leads to the whole "til death do us part" thang, I would have to go with my biggest fictional crush from the Whedonverse: Cordelia Chase. If you need me to explain this, you need to go watch Angel

Like every time I come up with a question for this thing, I had no answer prepared for a long time. Sure, I think Buffy Summers is the cat's pajamas, but look at all the guy's she went on one (or a few) dates with over the run of that series, and you can see why I wouldn't pick her for a Valentine's Day date (Owen from "Never Kill a Boy on The First Date"? Adrenaline Junkie now. Scott Hope? Gay. Parker? Clubbed over the head by Cave-man Buffy in the worst episode the series ever did, "Beer Bad." No thank you). Then there's Amy Gardner, Mary-Louise Parker's character on The West Wing who is so smart, quippy, strong-willed and gorgeous that I would love nothing more than to spend an evening with her...but afterwards I would probably wish it was a lifetime.

And, look, I love Fred from Angel like nobody's business, and would be more than happy to leave my clumsy (not-so-British) ways behind and become a bad-ass just for a chance with her. But if I have to pick a date for one evening, I'm going with Gwen Raiden from the same series, because I imagine a date with her would be just about the perfect combination of ass-kicking and flirting I could fit into one evening. She's a master thief, prime seductress, supreme wit...oh, yeah, and she has super powers. Sure, they render her literally untouchable, but come on, guys, this is a first date. I'll take my high intrigue and witty repartee and be on my way. Plus, maybe she knows Fred's number...

This was a really hard question for me, in part because nearly all the guys I'm attracted to on television are some kind of psycho killer (what does that say about me, exactly?) and in part because I pretty much hate Valentine's Day. But, after extensive deliberation, I've finally arrived at an answer. I'm going to go with Jayne Cobb, from Firefly. Unlike the supernatural psycho killers I tend to appreciate most (Angelus, Stefan Salvatore, Elijah), Jayne is just a really big, really strong, really crazy dude, and he seems like such a good time. He'd show me his gun collection, introduce me to his shipmates on Serenity, maybe get into a couple of fights to impress me, and then sleep with me, which are all things I'd really enjoy. He's silly, and ridiculous, and I would hate him within two days, but I think there are few people I'd have a better time with for one epic day. And he's so so attractive. Plus, he could teach me his song. Which would be the best thing ever: