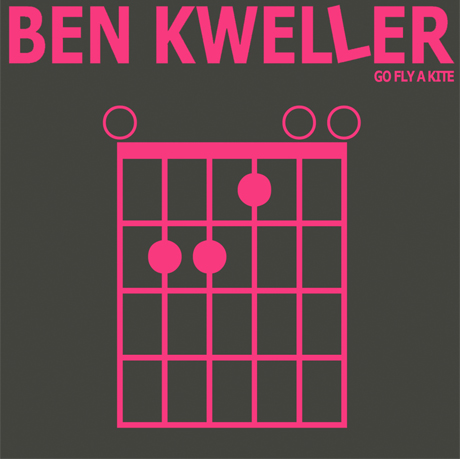 Bottom Line: An ecelectic mix of old and new Kweller that isn't groundbreaking but is pretty enjoyable to listen to.

\tWhile I consider myself a fairly casual Ben Kweller fan, I still know that this awkward-looking singer-songwriter began as an indie rocker on his album Sha Sha and continued as such until going full country for his 2009 album Changing Horses. While I actually liked his overuse of pedal steel guitar and honky-tonk sensibilities on this album, as I tend to do when indie rockers go country for a while, it seemed to disappoint others (and by that I mean the reviews that I could easily find in a Google search) who disliked his deviation from the norm.
\tGo Fly a Kite represents only a partial return to the more rockin' Ben Kweller with his pop sounding catchy tunes, as he doesn't seem ready to hang up the cowboy hat yet. Essentially, the album is a mix of rock, country (sans pedal steel guitar sadly), and a mish-mash of other genres that I'll try not to detail so I don't sound obsessive compulsive and/or like a douchebag.

The album opens with single "Mean to Me," which despite its title, is due to the repeated line "You don't know what you mean to me," not due to people being dicks to Ben Kweller. It's a fairly standard rock opener that sounds like it could be off Sha Sha, although its guitar solo and horns at the end give it that something "extra" that make it solid. However, the following track, "Out the Door," has a tinge of country with its blend of acoustic and electric guitars and harmonized vocals. It's not as country as Changing Horses, but one could imagine a beefy Texan trucker appreciating the song.
\tThis trend of mixing up the genres continues throughout the rest of Go Fly a Kite, as third track "Jealous Girl" is a catchy guitar driven pop tune reminiscent of early Weezer. The same goes for ninth track "Time Will Save The Day," although I kind of felt its titular chorus line is repeated a few times too many at the end of the song, just to be nitpicky. However, he does not dedicate too much of the album to reliving his early sound, and arguably spends more of it seeing how much country influence he can get away with.
\tKweller starts this trend about halfway through the album, as sixth track "Full Circle" would have been country enough for Changing Horses. This tune is driven by a fairly standard country acoustic guitar part interspersed with simple piano on the chorus, and Kweller howling some of the lyrics at the end. Album closer "You Can Count On Me" follows the same formula, only with less howling. However, not all country influence is cutesy and catchy on the album, as second-to-last track "I Miss You" tries very hard to be a heartbroken country ballad. While it may succeed since it has the most country-sounding guitar part on the album and features and an intermittent choir of "ooohs" to build its drama, its easy-to-guess lyrics make it a little hackneyed like 90% of songs called "I Miss You" and its emotional intensity almost seems a little out of place on the album.
\tOther songs on the album seem to have neither pop sounding rock energy or country sensibilities, which does not prove to be a bad thing. "Gossip" is driven by a repetitive piano melody, with organ and vocal harmonizing on its chorus. "Free" has an almost southern rock or blues influenced sound, and features the lyric "no more time for lady luck, she's looking for a stranger, all she wants to do is"¦be sure that you want to be free" (Spoiler alert: you think he's going to say "fuck" like the Doors did in that song "L'america"). "The Rainbow" is a grandiose song with prominent strings at the end and a piano-guitar mix defying a clear category, although it might be too epic to fit in with the catchiness Kweller excels at.
\tAll in all, fans looking for the raw indie rock energy of early Ben Kweller will be pleased with some tracks, and those who liked his country exploration two years ago will like others. Both will like the songs that fit into neither that sound like Kweller's more complex previous work. I wouldn't really say that anything on the album is really groundbreaking and that his lyrics, however heartfelt at times, are overly deep or profound, yet the album's earnestness and willingness to reach out into several directions at once should give it some merit.
\t
Grade: A-
Tags:
comments powered by Disqus