18
Aug
2011
If I Were A Boy
Alien
Becky
"If I were a Boy"¦" is the story of a young woman dealing with what it means to be a girl today. The world is different for the young 20 something generation, largely because most women of that age now work, often waiting to get married and have babies, if they decide to have them at all. The very definition of what it means to be a woman is changing. Pop culture presents an interesting place to look at what it now means to be a woman, what it means to be feminine, and consequentially what that all means for everyone else. The story will range from sci-fi, to fashion, to music and even politics, but mostly its going to be about how all of that affects me, and my life as a girl.

Whether you are a boy or a girl is the first identity you are taught. It is the first things you notice about someone, and in films especially, what gender characters are can completely change the story. It often determines many personality traits for the character.
Female characters used to always need a male lead, they generally are quieter and sweeter. Male characters are "˜the norm.' Making a character male is often the default, it means the character won't have a gender. Just look at the robots in Star Wars, both are quiet obviously male, but they aren't even human (personally I think they represent the queer couple in the franchise, but that doesn't change the fact that they are boys).

In horror, action and sci-fi movies this "˜male default' is particularly strong. But it doesn't have to be, the main, strong, survivor character doesn't need to be a boy.

Take the Alien franchise. Alien (1979) opens on a mining ship that has to go investigate a SOS call on an alien planet. A strange creature attaches itself to one crew member. The captain wants to let him back on board, but Ripley doesn't want him on board for fear of further contamination of the crew. Not to give away too much of this brilliant movie, but Ripley's initial fears are correct and the entire crew is attacked once the ship goes back into space.

Serious spoiler alert, but you can see a 15 minute version below. I definitely recommended you watch it if you don't want to, or cant' see the full version. (although the movie is genius and everyone should see the full version sometime in their life) I plan to talk about the sequels, eventually, as they only continue to evolve the themes I talk about here.

I know, Alien seems like your typical action sci-fi movie. In many ways it is. But there is a major difference between this film and other sci-fi action movies. The main character, Ripley, is a female. But she isn't some clichÃ© of a girl in a horror movie. Ripley is a gun slinging, baggy clothes wearing, intense woman. Furthermore she is played by Sigourney Weaver, a beautiful and intense actress who was pretty much unknown before Alien. According to legend, Weaver's brilliance is the reason Ripley is a female and not a male character. 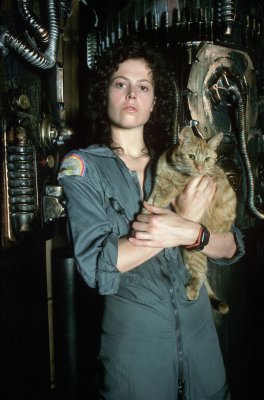 The first time I saw this movie, the first comment one of my co-viewers said was that Ripley wasn't very feminine. He felt that, since Ripley is a tough fighting woman who battles the aliens, she wasn't "˜being a girl.'
\t
This is an interesting critique, one I disagree with, but one that makes sense. Ripley is a strong character, a leader on the ship, with no sexual relationships or ties to the other characters. She is the main character of the movie, and the resulting franchise. In most films this character would be a boy.
But I argue that, because Sigourney Weaver is a woman, she brings more to the role than a man ever could. She does bring some femininity to the role, but in an unexpected way.
\t
Ripley wants to protect her ship and the crew. They are like her family and children and her job is to remove the invader. Ripley isn't there to shoot guns and set off explosions, she is protecting what she cares about. And that is fiercer and tougher than what any male could bring to the role.
\t
Because Ripley is a woman, it makes her fighting for more of a reason. Unlike a man's default often is, she is fighting for a purpose. She isn't hunting or killing or destroying, she is nurturing, protecting, and gets that fierce power only mothers protecting their young can have. In the end she literally is protecting her family, as she endangers herself to save the crew cat, Jonesy, literally holding Jonesy to her chest as mothers hold infants.
\t
Just take one of the most famous scenes in the movie, in which, of course, Sigourney Weaver is walking around in her underwear before fighting an alien. What man is intimidating when he is walking around in boxers? Weaver brings an intense sexiness that makes her believable as a woman, and an alien killer. No man can bring that power, let alone in his underwear.

\t
It is also unusual that Ripley doesn't have a boyfriend or a husband, or even a romantic attachment at all. In almost all films the females get paired off, or the fact that they are alone is a plot element in itself. Later in the franchise Ripley had one partner, but even he is only a minor character and their tryst doesn't even last through the film. Ripley is sexy, the underwear scene itself shows that. But she isn't attached to any sort of male. She is a free, independent woman, who also kicks ass.
\t
Women today are still pressured to be attached to men. My mother's favorite question to ask is if I'm dating anyone. And if I say no, I have to have a reason why I'm alone. Ripley doesn't have a man, and she never gives a reason why she doesn't.
Just because I'm not fighting aliens, doesn't mean I can't learn from Ripley. I don't have to believe that the only way to be feminine is to be meek. Women can bring intensity, perseverance, and a tenacity that men can't compare too.
\t
I feel like we are taught that the opposite of being tough and brave is being a woman. But Ripley proves that's not true, you can be tough and sexy and beautiful, and not be attached to a man. You can be both an alien killer and a protector. And most of all, you can be all of these and be a woman.


Check out more If I Were a Boy here

If I Were a Boy

If I Were A Boy
Tweets by @Reviewtobenamed