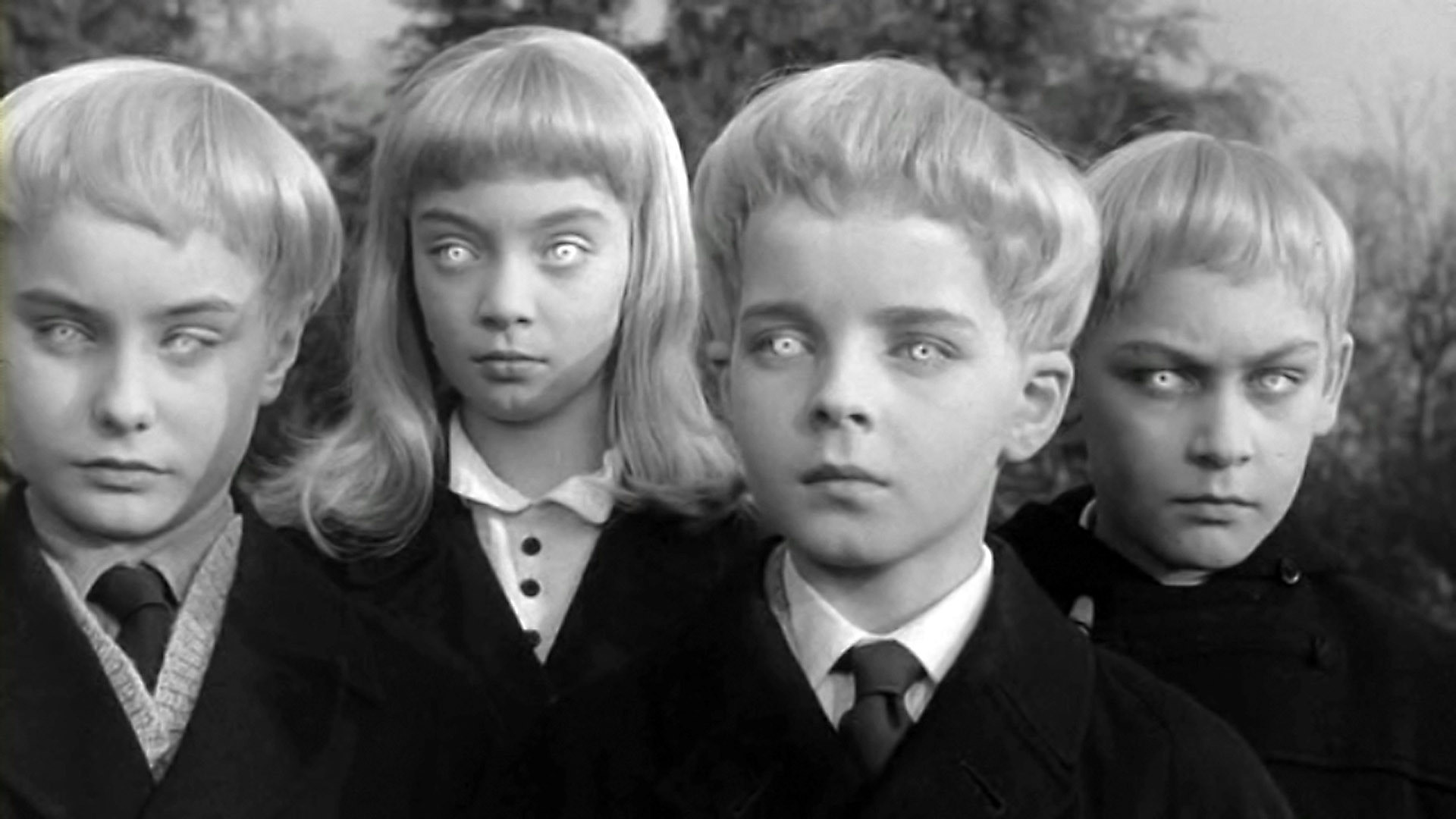 I’m not sure if I’ll be able to keep up the pace of reviewing two movies for every Graveyard Shift, but since Village of the Damned and Children of the Damned are presented as a DVD double feature, I kind of couldn’t resist. In many ways, these films are incredibly similar, so you almost don’t need to see both of them in order to get their point, but the differences between the two, with only four years between them, are also pretty fascinating. But the biggest, and most interesting, problem with these two films is that there is no way they will frighten the contemporary horror viewer, but they are a curious time capsule of the fears of the early 1960s and their influence on later narratives is indelible.

By far the superior film in all ways but one, Village of the Damned opens in a quaint British town where one afternoon all of the denizens mysteriously pass out. Government officials are able to quarantine the area, drawing a line around the infected environs, but just as quickly as the problem is contained, the slumbering citizens awaken, seemingly unaffected. It isn’t until two months later that local doctors discover that all of the women of the town who are able to bear children are now pregnant, despite many a protestation of the impossible, all seemingly tied to that exact inexplicable occurrence. When the children are born—all early, and all of an incredibly high birth weight—they are all blond with intensely creepy blue eyes, and even more mysteriously, a sort of hive mind: if one of them learns something, then all of them know it without having it explained. These children bond to each other, blocking out all attempts from other children to disrupt their circle, and the citizens of the town become increasingly afraid of them as horrible incidents begin to pile up.

Children of the Damned never refers to the incidents of the previous film, so it seems best to assume that the events are unconnected or take place in different filmic worlds, despite the fact that the story is so very similar: six children, from different parts of the world, are discovered to have incredibly high intelligence, and are brought together in London to be studied. They form an instant bond, of the same sort of connected thinking and shared memory seen in Village despite the fact that they come from vastly different places. They escape, taking one of the children’s “aunt” hostage, and hide out in an abandoned church. When attempts are made to separate them or interact with them, tensions mount towards devastating ends.

While this story doesn’t share the beautiful pacing or the tight plotting of its predecessor, it is much more visually interesting; Village, released the same year as Hitchcock’s Psycho, feels incredibly old-fashioned in style, but Children has some gorgeous shots and despite being only four years younger, feels almost contemporary in its visuals and structure. But stylistic elements aside, both films are so obviously allegories of the spread of Communism, it is easy to understand why both were so successful upon release, despite landing on different judgments of the children by their ends. In Village, there are many other places where similar instances have affected people, but most of the children produced in those places were destroyed, and the inscrutable nature of the children, which is presented as an inhuman stoicism and intensity, becomes part of their biggest threat: they look like us, but they can read our minds, make us do things we don’t want to do, and containing them—even destroying them—seems to be the only way to save humanity. At one point, it is even thought that they might be an alien race, sent to take over the world, and these are exactly the narratives driving much of the containment culture (not to mention almost all of the popular culture) surrounding reactions to Communism produced at this time. The ending especially, wherein the one person trying to understand these children, must close his mind to their probing in order to have a shot at resistance, is built upon the fears of brainwashing and mental manipulation that pervaded a culture terrified of the Communist threat.

Children, on the other hand, never exactly settles on what the significance of the genius children are to society at large; it is discovered that they are in fact human, but so far advanced from us that our relationship to them is unknowable. Because they are so closed off from the people around them, almost completely unable to communicate with them, they seem to pose a genuine threat, but at every turn, caution is urged in all interactions despite the many authority figures who wish to see the kids destroyed before they can hurt anyone. While Village is more traditionally concerned with containing the threat the children pose, Children seems to argue that more caution, more understanding, and more care should be taken to prevent violence from escalating.

Both films clock in at less than 90 minutes and are fun time capsules of 1960s horror—not only that, but their influences, including Stephen King’s Children of the Corn, are widespread. Though they might not terrify you today, they are provocative discussions of the fears at a particular Western historical moment, the acting is solid across the board, and they help set the stage for the horror revolution that takes place in the 1970s. Also: Creepy British Children.