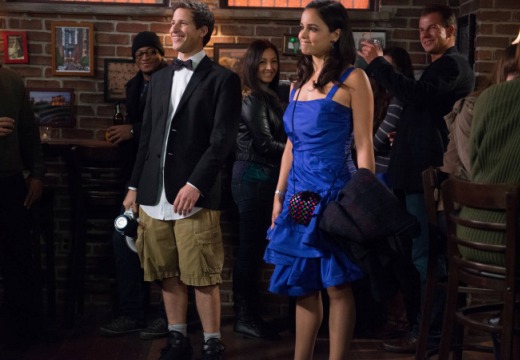 When Brooklyn Nine-Nine won Golden Globes for Best Comedy Series and Best Actor in a Comedy Series, I was not exactly pleased, but I wasn’t surprised either. The Hollywood Foreign Press Association loves being the first one out of the gate to heap praise on a newcomer, to the point that brand new shows (especially, I think, comedies) tend to do disproportionately well there. You might have guessed that I don’t think Brooklyn Nine-Nine is the best comedy on television, and I think I’m well on record in thinking that Samberg is, if anything, the weak link in an otherwise solid Ensemble. But “The Bet,” which is probably going to experience a post-Globes ratings boon, is a pretty good showcase for the young series, mixing comedy and heart well, and using Samberg about as well as he has yet been utilized on the show.

I should also note at this point that I am a complete sucker for a will-they-won’t-they. That doesn’t mean I don’t see the flaws when they exist, nor that I paper over problems if they are generally well executed, but I’m a bit of a sap, and if the show handles its romantic plotlines decently, it gets some credit from me. In the pilot, the Peralta-Santiago pairing felt forced and shoe-horned into a series that didn’t inherently need it, but by the end of “The Bet,” I bought the attraction and was at least theoretically invested in this as a potential pairing going forward. The episode also does some great work on the Boyle-Diaz will-they-won’t-they, one that, due to Boyle’s puppy dog earnestness and Diaz’s harsh exterior, I have been in favor of from the start.

What impressed me most about “The Bet” was the evidence, which we’ve seen bits of earlier, that Andy Samberg can dial it back and give an interesting, funny performance without mugging and bellowing. He’s still a wacky, obnoxious guy here, but there’s a relaxed charm to his interactions with Santiago on the roof, and he and Melissa Fumero have an easy chemistry that was used well here.

It didn’t hurt the episode, though that it had two killer runners, with Boyle’s pain-med induced truth bombs and Holt’s continuous efforts to bail out Terry only to accidentally make the situation worse. Joe Lo Truglio is great at playing Boyle’s earnestness, and the gag got used in nearly every possible permutation—uncomfortable admissions, bad-ass admonitions, plot movement and heartfelt hopefulness. It was funny, moved the story along, and had some heart too. And I know I rave about Andre Braugher every week in this space, but good lord was he on his game tonight (seriously, if anyone from this cast deserves some awards at this point, it’s him). Watching Holt struggle to dig himself out of a hole without breaking his reserved demeanor was absolutely hysterical. Throw in a few great one-liners from Gina and a little Hitchcock and Scully magic, and you have one of the best episodes this series has done so far.

I still don’t think Brooklyn Nine-Nine should have won a Golden Globe on Sunday. But “The Bet” is maybe the best argument yet for this show’s potential greatness, and I am relieved that, with its awards buzz and a statement from Kevin Reilly, a second season seems imminent. The show isn’t perfect, but it is already working out the kinks, and I hope it continues this upward trajectory toward greatness.

-“Charles is getting the same medal as a horse!” “At least Boyle was announced first.” “Because the horse outranks him!” I love Mike Schur and Dan Goor’s obsession with celebrity horses. Please bring Sergeant Peanut Butter back, and regularly.

-“Peanut Butter will not be joining us. He’s being feted by the United Nations.”

-“Why do I wish you had braces? Should we get you braces? No, that’s too much.”

-“Oh. I have caused a problem. I think I am…getting a text message. Bloop. There it is.”

-“I sometimes worry I’ll become you.”

-“Have you seen Rosa?” “Rosa died eight years ago.” This, or Holt’s faked text message, was my biggest laugh of the night.

-“What else don’t I know? You cookin’ meth? You breakin’ bad? How many phones do you have?”

-“Unless you want to end up moving into your ex-wife’s new boyfriend’s basement with me, you better man up!”

-“Sometimes when they go on nice vacations, I’m allowed to use the hot tub.”

-“I’m sad you all arresting me, but I gotta say, I’m glad you back together.”

-“When you finally go out with me, and you will, it will be because I do things that only Charles Boyle would do.” Awwwwwww.