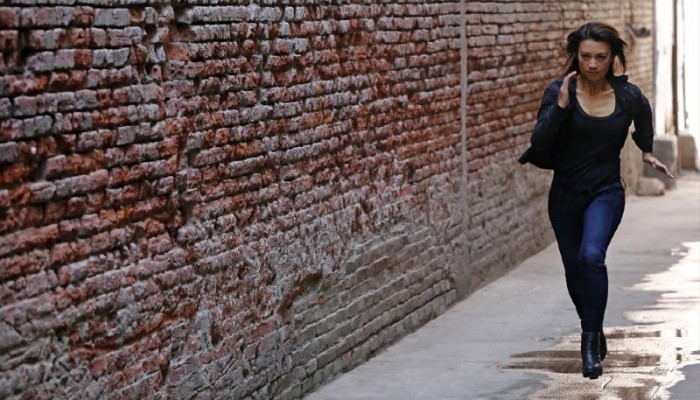 I’ll say this up top because I think it bears emphasizing: “Seeds” is the best episode of Agents of SHIELD yet, one that starts to be in the ballpark of what I had hoped this show would be and aim to accomplish from the get go. There are still a lot of problems here, namely that the show doesn’t seem to have anything close to a firm world view or driving morality behind it, but “Seeds” is an inventive, thrilling, universe-expanding episode of the show filled with cool action sequences, break-neck pacing, and a narrative propulsion much of the show’s previous episodes have lacked.

This is, technically, another villain origin story episode, this time for Iron Man adversary Donald “Blizzard” Gill, but unlike the previous iterations of this format, which seemed satisfied enough with the shout out to coast in storytelling, this one carries some emotional weight. It spends enough time making Donnie (Dylan Minnette) into a character that his evolution toward villainy makes some amount of emotional sense.

One of the strengths of this episode is its willingness to embrace the show’s comic book origins in a way past installments have seemed reticent to do. We visit the SHIELD Academy and its secret underground nightclub for the student body. We see something is amiss (in this case, that moisture is being frozen solid by some highly advanced tech that should be above the capabilities of the student body), and we watch out heroes combine investigation and action to solve a unique problem. Basically, “Seeds” feels like an episode out of an espionage procedural set in a superhero universe—or, what I had hoped it would be all along.

Though the show’s problems of characterization are far from solved, there is some depth to this episode that is refreshing. Most importantly here, it seems like the writers (in this case, co-showrunner Jed Whedon and Monica Owusu-Breen) are starting to get a handle on Fitz as a brittle genius with a serious bitchy streak. It’s a more relatable, and thus, likable, version of the character that is consistent with what we’ve seen before, but with enough depth and nuance to resonate more as an actual human being. Fitz is a bit of a preening egotist, which gives him a comedic angle and the potential to create conflict with the rest of the team, and also allows for some darkness to be bred into the character, which we see subtle hints of here. Earlier this season, I talked about my hopes that Fitz and Simmons would be sort of like Topher on Dollhouse, who I initially approached warily, and who eventually became one of my favorite characters on the show. No one on Agents of SHIELD is enough of a character at this point to even earn consideration for the distinction of favorite, but Fitz showed progress tonight of the sort that makes me hope someday these people might actually develop personalities and tics of the sort that real humans have and, more importantly, of the sort necessary to create the dynamic ensemble this sort of show needs.

Meanwhile, the show goes to great lengths to resolve its other lingering mystery—that of Skye’s parentage. Between this and last week’s “The Magical Place” (which, for the curious, I thought was a not-great episode that still did something important), I’m beginning to have a bit of faith that the showrunners understand some of the flaws of the show. Early episodes seeded the questions of Coulson’s resurrection and Skye’s past as things we should be fascinated with, but failed to do much to make them interesting. That it is now at least beginning to mop those questions up leads me to think the minds behind the show see now that those mysteries were poorly planned out, and are trying to resolve them to the point that they remain interesting blank points in the larger mythology. We now know basically how Coulson was resurrected, but, like him, are left unable to trust the story we’ve heard, nor anything about how Coulson might have been altered during the procedure. Also, we know the basics of Skye’s past, but are left to question what power set she might possess, who knows about it, and why they are trying to kill anyone associated with her. The large, reasonably uninteresting architecture of these mysteries has now been revealed enough that the more interesting, lingering questions are revealed. What we’re left with is the sort of mystery that can actually generate thematic and character conflict going forward, instead of just a catchphrase like “Tahiti—it’s a magical place.”

The trip to Mexico City also provided a chance for the show to remind us how great it can be at close quarters action choreography when it needs to be. The alley fight between May and Lumley was incredibly arresting stuff, filled with innovative camera work and the sort of moves that made me literally say “cool,” something this show could use a lot more of. One of the biggest concerns I hear people mention with a show like Agents of SHIELD is the difficulty of replicating big screen action on the small screen, but that’s something I personally rarely have a problem with. I can handle terrible CGI (hell, I was a fan of the early years of the Doctor Who revival, when the CGI was nearly unwatchable) if it is in service of big ideas and rendered well enough that I basically get what the show is going for. Yet where I think a show like this can excel is in little moments that don’t eat up the budget but hint at the capabilities of these characters to at least function in the high stakes world they have been thrust into. The alley sequence here is one of those, a reminder that this show could easily become a satisfying action-adventure procedural if it can work out some of the kinks.

That trip also, as I mentioned, recharacterizes the mystery around Skye in what I think is a more interesting way. It also ties Skye more closely to SHIELD, however, which set off some red flags in my head. This show has not been very good, so far, at figuring out exactly what attitude it takes toward the global surveillance techniques of SHIELD. It’s morality mostly goes only as deep as “we are the good guys because we are going to stop someone else who is clearly a bad guy,” which I find consistently disappointing. Skye worked well as a potential skeptic, an outsider who was deeply distrustful of the organization and its aims, and who would challenge loyalists like Ward to keep them focused on morality over marching orders. Now, though Skye is positioned to view SHIELD as unassailable saints who have protected her all her life, as secret guardian angels that have become her surrogate family. That is fine enough, I guess, but it deprives the show of an obvious window into the murky ethical issues it has been obfuscating so far, and makes it more likely those issues will be avoided entirely going forward. I can’t see a version of Agents of SHIELD I love unreservedly that isn’t at least somewhat suspicious of the role SHIELD plays in the Marvel Universe, and I can’t see a show in the Whedon mold (which this clearly is, even if it is not particularly effective so far at replicating Joss Whedon’s successes) that doesn’t have skepticism toward authority deeply ingrained in its DNA. This has been a problem for me all season, and in an episode that made some important strides in other areas, it seems like something the show is still utterly failing to address.

While the show loses Skye as the skeptic, though, it does move Coulson towards that role by reminding him he can’t really trust the organization he works for to give him the truth. His new “no secrets” stance is an interesting one, and definitely at odds with his role as a higher up in an espionage organization. Making Coulson more of a renegade makes it more likely his deeply loyal team will be at odds with the darker elements of SHIELD, and that is a status quo I could be very intrigued by. We’re a long way from the rebellious crew of Serenity here, but if the show is aiming to shift Coulson into a more suspicious alignment, I can support that.

Yes, “Seeds” is a solid episode of the show, but it doesn’t solve the problems, not by a long shot. The reason it leaves me vaguely hopeful is that it at least seems to be identifying those problems, and that is usually the first step toward improvement. Agents of SHIELD isn’t playing in the big leagues yet (if we’re being honest, it maybe has a shot of making a high school JV team at this point), but “Seeds” is the kind of episode that shows a positive version of the first season struggle, an effort to work out the kinks and come up with something more interesting and watchable that it had before. And that is a project I find intriguing.

-“You shouldn’t keep these big ideas to yourself. You should run them by your instructors.” “These aren’t my big ideas.”

-“The world is full of evil, and lies, and pain, and death. And you can’t hide from it. You can only face it. The question is, when you do, how do you respond? Who do you become?”