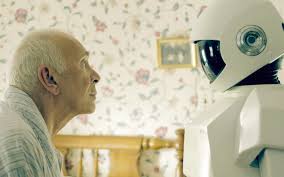 If you are like me at all, then you are probably dying to see Spike Jonze’s Her (2013), but you live in a market where that beautifully reviewed film has not yet opened. You might also have been a bit disturbed by the massive Netflix purge that officially finished its yearly sloughing on January 5th, dropping hundreds of easily avoidable films along with tens of those films we feel are required viewing but just…hadn’t gotten around to watching. My Instant queue is a bit slimmer now, that is for sure. But fear not! There are still some delightful gems just begging to top your list and fill in the holes created by living in damp Midwestern towns who will routinely prioritize Walking with Dinosaurs to the newest batch of Golden Globe nominees.

One such film that I think you might enjoy is 2012’s Robot & Frank. Though it opened to pretty solid reviews well over a year ago, it was both poorly marketed as an indie comedy and overshadowed by the blockbuster films that seem to start earlier and earlier each summer. One of the reasons for this quick box office turn-around has to do with the fact that the film doesn’t exactly know what it is: it is one part family drama, one part treatise on aging, one part examination of our relationship with technology, and one part crime caper with some light, chuckle-worthy comedy sprinkled on top. Shake that all up, and you have a film that lightly trips along, capably filling all of those roles right up until the end where it has to decide which one it really wants to be. Because it is trying to do so many things, none of them really get a chance to shine, but that said, it is still a thoughtful and charming look the things we hold onto as we grow older.

The story, though not really overly complicated, is a tough one to boil down to just a few sentences without giving away some of the things that make this film really work—suffice it to say, I’m always going to fall on the side of not telling too much, and just encouraging you to watch it yourself. Frank (Frank Langella) is getting older, and struggling to take care of himself despite his assurances to his son Hunter (James Marsden) and daughter Madison (Liv Tyler) that he is fine living on his own. He spends his time trashing his rustic upstate New York house, walking (in the middle of) the winding roads to the small town nearby, shamelessly flirting with the local librarian Jennifer (Susan Sarandon), and shoplifting. You see, Frank is an ex-cat burglar, using small thrills to keep his wandering mind in shape—he can’t remember which restaurants have closed, but his misdirection is still sharp. When Hunter makes one of his weekly visits to check in on his father, he becomes fed up with Frank’s inability to keep his home in order and leaves him with Robot, a caretaker who looks a bit like a middle school-aged Stormtrooper with Peter Sarsgaard’s voice. Though Frank initially resists Robot’s attempts to get him to eat healthy and start a routine with a hobby like gardening, he comes around after he discovers that “stealing” and any moral judgments about such an act haven’t been programmed in to Robot’s circuitry. He sets out to teach Robot all of his old tricks, and the two begin to plan out some high stakes robberies about town, beginning with the lifting of a rare book from the library’s safe.

The cast is incredibly charming and fun to watch and the capers get much more involved than I had previously thought they would, making the plot more intriguing and more fast-paced than I had anticipated. But what really makes this one so interesting, besides the creative imagining of what services technology might be able to provide us in the supposedly near future, is the family dynamic at work here. Hunter, wanting to take care of his dad despite Frank’s resistance, feels like his efforts are unappreciated, and Madison, who is wildly opposed to the use of technological caretakers, steps in to take over, only to discover what Hunter already knows: Frank’s slovenly ways and rapidly deteriorating memory are beyond human capability, but neither of them can face the thought of placing him in a full-time care facility. What Robot brings out of Frank, both in his quality of life and in his mental stability, is lovely, if ultimately destructive, and the family drama at the heart of this story is engaging, and, despite its science fiction leanings, feels incredibly real. It is sweet, fun (if not outright funny), and, well, heart-warming—and a fitting bookmark in your winter viewing until better offerings pop up in your local theater.

Typically, I use this space to urge you to drop a terrible film from your list, and I honestly set out to intentionally watch something bad so I could warn you away from it. I really tried. But Devil, despite its many, many weaknesses, is also kind of an interesting failure, and I’m not entirely sure it deserves all of the ire it garnered upon its release. Part of its previous bad press is due to the writing credits—M. Night Shyamalan is going to be a tough sell to anyone these days—so it was unfairly burdened out of the gate. But this story about five strangers trapped in an elevator while police and security try to rescue them from the inexplicable events that are endangering their lives, is, at its most bare, interesting. The cast, despite the weaknesses of the script, are great—Chris Messina, Caroline Dhavernas, Bokeem Woodbine, Logan Marshall-Green, even Geoffrey Arend works here—and make more than the most of what they have to work with. And the chemistry between the people trapped in the elevator is absolutely believable and affecting. The problems, and the biggest eye-rolls, come from the fact that the script becomes more like a morality play than a supernatural mystery, and is so insistent on the lessons that it wants to impart to the viewers that it just might lose you in its judgments and religious dogma. It is both primed for a hate-watch, if you are so interested, and for a pleasant surprise; the story is engaging and clever in ways that I hadn’t anticipated, and despite having many problems that might’ve been managed better in different hands, it is an interesting failure, and one that I kind of want to watch again—even against my better judgment.