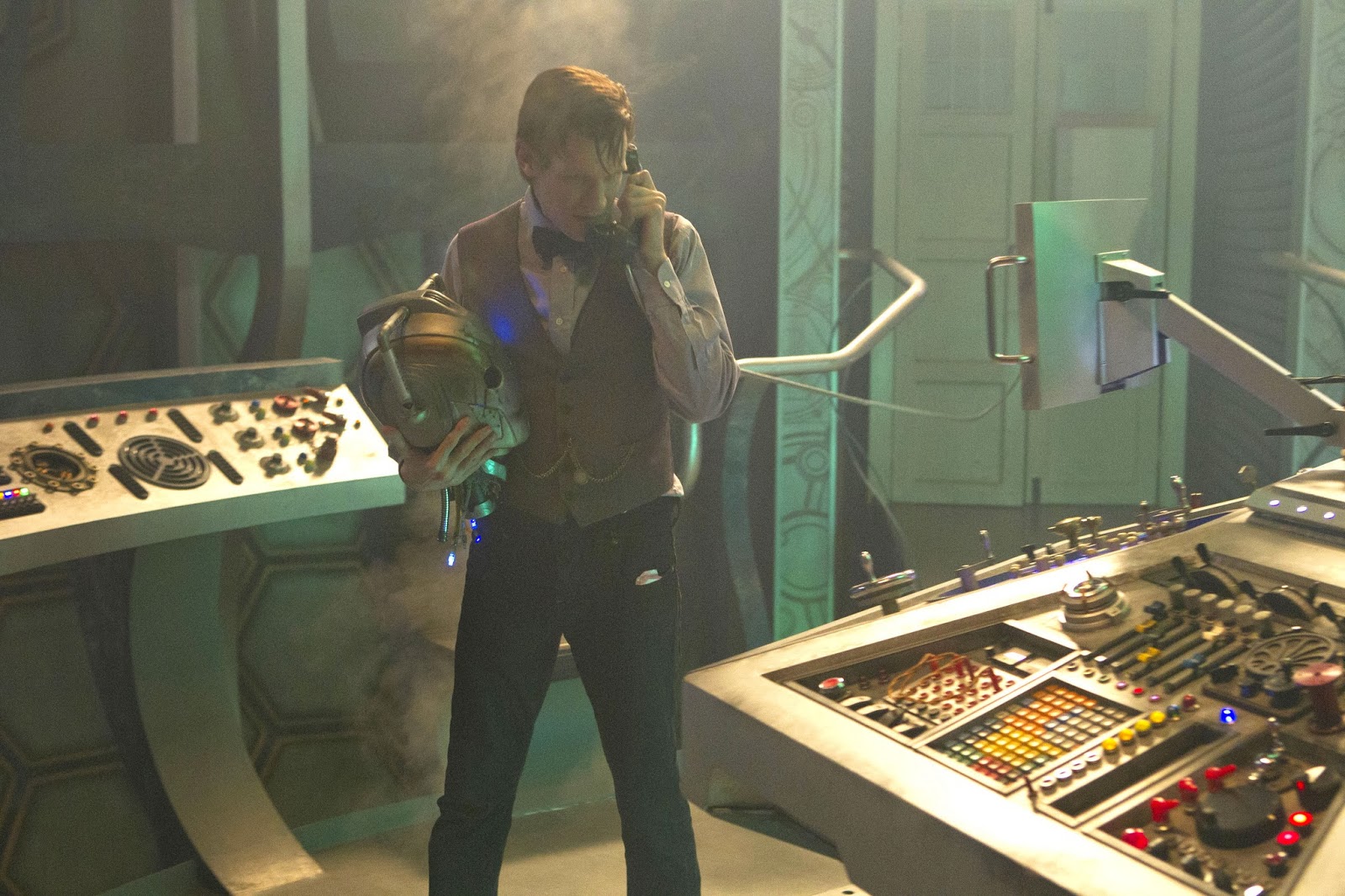 When Christopher Eccleston regenerated after his one season as the Doctor, all I could think about his replacement, David Tenant, was that he may be good, but he can’t be as good as Christopher Eccleston. No way. Then he was, and he was probably a bit better too. Maybe different is the most accurate way to portray the change. The same fear/sadness coursed through me when Tennant said he didn’t want to go, but still did. Matt Smith took over – young and energetic, screaming GERONIMO as the TARDIS fell outside of Amy Pond’s big, empty house. Smith couldn’t be as good as Tennant and I’ll never get over seeing this new face portray the Doctor. But I did. More accurately, I should say we did. Matt Smith’s tenure on Doctor Who bolstered the franchise from a cult-phenomenon to appointment television for many in America. While Eccleston and Tennant brought the show back to life, Smith made it a smash.

In Smith’s final episode, “The Time of the Doctor,” the episode has a higher goal to meet than just a run of the mill monster/time-wimey caper. Like the 50th anniversary, this needed to balance two things. First, there had to be some sort of resolution with the Silence/Trenzalore and second, it had to be a fitting farewell to Smith’s Doctor. Unfortunately, the plotty-nature of the fall of the eleventh felt like a roadblock to the emotional wreckage that fans of the show knew was coming late in the episode. Tasked with defending Trenzalore in a Cold War-esque stalemate with Tasha Lem (Orla Brady), the first half of the episode was just a mish-mash walk down memory lane. Oh look, it’s the Cybermen! There’s a weeping angel! Oh and some Daleks to boot! When the program has relied on bringing all of the Doctor’s rivals together, it really serves none of them. They were used in this finale as a monolithic “enemy of the Doctor”. That’s not necessarily a bad thing, but it made the first half of this week’s episode drag a bit.

Where “The Time of the Doctor” was wildly successful was when Steven Moffat went back to his strength – making us clutch at our chest, reminding us why we love Doctor Who and specifically this Doctor. As the Doctor continues to wage war against all of his old foes on Trenzalore, we see something we haven’t witnessed since the end of David Tennant’s run – an aged Doctor. I mean, yes, we’ve seen older Doctors (the very first one for example), but it’s a shock to the system when Matt Smith -- the puppy dog in tweed – walks out looking more basset hound than golden retriever. At that moment where we first see a graying Doctor, one with wrinkles on the outside as well as the inside, is when that twinge of sadness hit.

Seeing an aged Doctor was a visual indicator that this battle was different than all the others. The Doctor was determined to follow through on his promise to never utter his name as long as he was on Trenzalore and defend the people of Christmas Town (oh yeah, Moffat had no real interest/need to make this a true Christmas episode).

After Clara makes yet another return to Trenzalore, centuries later, we see the explosions and battles continue, yet the Doctor is nowhere to be found. Clara finds him, ancient and alone with his re-appropriated Cyberman head that’s recently passed on to robo-heaven. Truly knocking on death’s door, the Doctor readies himself for one more go against the baddies. This time it really feels like the end, so much so he invokes the Time Lord rule of only 12 regenerations – reminding the audience that this is it for the Time Lord. However, Clara makes a plea to the crack in the wall, which reappears earlier, asking the too-often asked question, “Doctor Who?”

I’m glad Moffat gave Smith one more top-of-the-mountain speech. Smith’s Doctor has really reveled in the moments when he gets to shout at the bad guys, saying come and get me! As the clock strikes 12 (wonder what that means) the crack in the universe opens up after Clara explains his real name is the Doctor (while there is some poetic truth to this, wouldn’t the crack like the really real answer?) and squirts some regeneration energy his way. As it courses through him, there’s that renewed energy we know so well. Smith is knocking down the bad guys one by one with tremendous energy. It is a glorious moment of fantasy.

After blowing the Daleks and other baddies into oblivion we find a young Matt Smith back on the TARDIS. Moffat wouldn’t make us say goodbye to this Doctor in his old skin. We see Clara find a bowl of fish fingers and custard – Moffat’s trying hard here, and it works somehow. Smith explains that at any moment, “He’s-a-coming” When Clara asks who, he says, “The Doctor”. This last sequence with Smith is now just Matt Smith saying goodbye. In Smith’s last moments, he remembers a young Amelia Pond (who in my mind will always be Smith’s companion, sorry Clara). In one last parting word, Smith explains, “We all change when you think about it…and that’s OK as long as you remember the people you used to be. I won’t forget this, not one day. I will always remember when the Doctor was me.” Also kudos to Karen Gillan for coming back, giving us the real last word – Raggedy man, goodnight. The Eleventh’s story was always tied up with Amy, for better and for worse. And to have his last memory in that body be of her makes sense and feels right.

In one last tip of the hat to Smith’s run, the Doctor undoes his trademarked bowtie and lets it fall to the ground. Clara, acting as the audience, begs Smith not to change. And BLAM he changes in an instant. The contrast of Smith’s face to Peter Capaldi’s is stark. Smith is the puppy dog while Capaldi looks almost reptilian. Clara’s plea not for 11 to change is as much a part of Doctor Who as the TARDIS. Moffat chose to have such an instantaneous change to rip off that bandage and remind us that there’s always going to be someone new to keep the Doctor alive.

Capaldi’s entrance was expected, but I didn’t think it would be so sudden. Nobody could have guessed his first line either – KIDNEYS! As the TARDIS begins careening into time and space, Capaldi asks, “Do you happen to know how to fly this thing?!” And we’re off.

This episode didn’t live up to the weight of seasons worth of Silence storylines, as it had a bit of a magical ending. Moffat seems to have a knack for starting exciting plots for the arcs off seasons, but it’s been a mixed bag at best when it comes to finding an end. Where Moffat excelled in this episode (and where he’s been consistently strong) is with the emotional aspect of the Doctor and those that love him. The Goodbyes hit all the right notes, and seemed to come from the hearts of not just the Doctor, but Matt Smith himself. He’ll be missed no doubt. There’s just no way anyone could replace Smith, there’s just no way. Of course, I’ve said that about a few other Doctors.

-Something that seemed to be insinuated through montage was that it was in fact the crack in the wall residing in the Doctor’s Room 11. If I read that correctly, it is a shame Moffat felt like he had to answer that question. Keeping it open-ended worked perfectly.

-“Anyone for Twister?” – A very nude Doctor

-After the question – Doctor Who? – has been asked so many freakin’ times, can Moffat please retire it for a bit? It used to be a one-off joke used maybe once a season, now we get it four hundred times a year.

-I loved how much Moffat addressed the fandom. Everyone knew Smith was wearing a wig so they made a joke out of it. They also joked about his barely there eyebrows: “Is that what happened to your eyebrows?” “No, they’re just delicate.”

-Good on Moffat also for directly addressing the 12 regenerations thing, even if it didn’t make the most sense to me. At least he let fans know that he knew.

-Last but not least – Peter Capaldi: First, a big cheer for his real Scottish accent. There’s so much character in that man’s voice I’m glad they don’t have him pulling a Tennant with the accent. Second, there wasn’t much to go off here except for the line about him not being a fan of the color of his kidneys and his line about not knowing how to drive the TARDIS. My guess is that Moffat doesn’t completely know who Capaldi’s Doctor is yet, as I could imagine there wasn’t a fully-fleshed out Smith Doctor after his one Geronimo in Tennant’s last episode. Here’s to Capalidi, he’s got a tough task as all of the other Doctors did before him. I hope that his old age doesn’t turn off younger viewers too much. This is an interesting direction to take the show, I think, but that all really depends on Moffat at the end of the day.