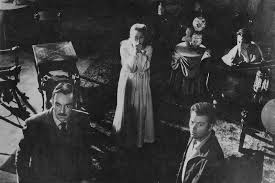 Unlike the previous installation of the feature, where I felt confident recommending both versions of vampire flick Fright Night, this week I looked at another pair of films, both entitled The Haunting and both based on Shirley Jackson’s incredible novel The Haunting of Hill House. This time I could only come out in favor of the earliest adaptation, and hopefully I can convincingly steer you towards that one (because it is fantastic, in most senses of the word) and away from the newest version and its star-studded cast (because it is abysmal).

I’m going to start off by talking about the original, though, and then tell you at the end some of the reasons why the retread fails so miserably. The original, in the first place, keeps as close to the bone-chilling source material as any adaptation I’ve ever seen, which is incredibly difficult to imagine considering the depth of interiority the novel gives into the main character, Eleanor. After establishing the tragic history of inhabitants of Hill House via voiceover and a rather bleak montage, we are dropped into our plot. Eleanor “Nell” Lance (Julie Harris) is woman who has spent the last 11 years caring for an aging mother, slavishly devoted to her mother’s care and comfort at the expense of her own life. When her sister and brother-in-law decide to cut her out of the will, refusing to reward her for her years of service to the family, she heads to Hill House to participate in a scientific study that she knows little about. In a scene that can’t help but remind viewers of Janet Leigh’s ill fated drive to California from Psycho just three years earlier, we are treated to the first glimpse of Nell’s thoughts, as a voice-over tells us about her nervousness about striking out on her own, her desire to think of this as the first vacation she has had in years, and her longing for a family that welcomes her. After some creepy interactions with the Dudleys, a husband and wife caretaker team hell bent on warning Nell and the other visitors about how far away the town is, and how no one will be able to hear them, Nell begins to enjoy the incredibly gorgeous surroundings of Hill House.

The beautiful, eccentric artist Theodora, or “Theo” (Claire Bloom), soon joins her, and the two set off to explore the vast manse, seeming to strike up an immediate friendship. They meet up with Dr. John Markway (the dashing Richard Johnson) and his nephew, the skeptic Luke (Russ Tamblyn) who sees Hill House as an investment property. Dr. Markway reveals that both Nell and Theo have been brought to Hill House because both have been involved in psychic phenomena—Nell in an incident during her childhood, and Theo displaying mind reading capabilities—and are there to help Dr. Markway discover if they can find a way to scientifically record instances of the supernatural. This is one of the major ways that this earlier film greatly outpaces its successor: other than the skeptical Luke, the characters are willing and open to experiencing the idea of the supernatural powers of the house, and this goes a long way towards getting invested in the story and its characters. Rather than spending time debating the existence of the occurrences, which begin immediately, conflicts arise between the characters over the nature of these occurrences and their effects on the safety of those involved. Nell is immediately targeted, both by the acts themselves (they seem to follow her about the house) and by the others, Theo especially, who believe that she might actually be causing them to gain the attention that she seeks. As the events increase in both intensity and frequency, Nell begins to fall in love with this house, and to feel increasingly alienated from the others around her.

Descriptions of this story, however, don’t really, to any extent, do this film or its extraordinary source material even the faintest whiff of justice. Even 50 years later, this film still has a lot of scary ground to tread. Aided considerably by the deft direction of Robert Wise (best known for the film versions of The Sound of Music and West Side Story), the film uses camera angles, sound, gorgeous lighting, and very limited special effects to create an incredibly, almost exhaustingly, scary event. By skewing close to the source, this film capably sets the viewer at a place where it is impossible to know how much to trust Nell and her version of these events or her perceptions of those around her. There are two scenes in particular that still have the power to make even a contemporary horror aficionado jump, and even if Harris’s depiction of Nell can grate at times (I blame the voiceover, even though it is the only way we can get inside Nell’s thoughts logically, and we need to for this one—the whole story hinges on our understanding of Nell’s position). There is a reason so many contemporary horror filmmakers place this one so highly on their list of influential films, and it deserves to be seen.

But not nearly as deserving: the remake. Nell (Lili Taylor) goes to the even bigger, and even gaudier version of Hill House, and is joined by Theo (Catherine Zeta Jones), and Luke (Owen Wilson), believing that they are participating in a study about sleep disorders. Dr. David Marrow (Liam Neeson) has actually gathered them in this creepy estate to study the relationship between sleep and fear, believing that the mansion will provide the right kind atmosphere to provoke the responses he wants to examine. He is not upfront with his participants, trying to achieve a level of authenticity, but also making everyone watching the movie groan at the implausibility and unethical nature of this particular exercise in manipulation.

While many parts of the basic plot are the same, there is little to no character development, and rather than allowing the relationships and mental stability of the characters drive much of the story’s momentum, this version cranks everything up to 11. The house is chock full of grotesque carvings that begin to emote and call out to Nell, there is a Citizen Kane-sized fireplace concealing horrors of this history of the house, a hidden library of information about Hill House’s previous residents, and a creepy fountain that comes to life and spouts blood—in other words, the special effects are out of control. They want to be scary, but I am having a hard time thinking of another film where the CGI was hit so hard, so consistently, and absolutely fails every time. It looks ridiculous—and since it is supposed to provide most of the scares, well…let’s say things don’t work out as intended. Couple this with the wild swings of characterization and taking the plot in a direction that can only be described as soap-operatic, and cap it all off with one of the most absurd endings ever conceived, and this one is a royal mess. It doesn’t deserve to be in the same review as the other, let alone share the same name, but I just wanted to save you from thinking this might be an acceptable substitute (and since it is the one on Netflix Instant right now, you might be tempted). If however, you want a good chuckle or two at some bat-shit insane imagery and some wacked-out character development, rather than a genuinely chilling horror masterpiece, well then, this version will be there for you.