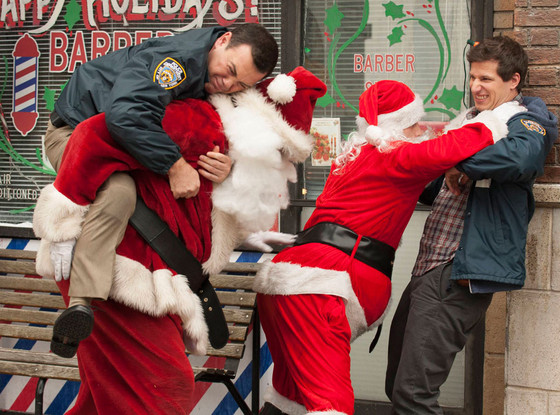 If forced to lay money on what would happen during Brooklyn Nine-Nine’s inaugural Christmas episode, two Santas fighting each other would have been very high on my list. I went into “Christmas” with low expectations and a high sense of holiday episode fatigue. For a show so early in its run, a shocking number of episodes have been centered around the holidays. While “Christmas” features some general themes about togetherness and sacrifice, it doesn’t fall into the same exact structure the Halloween and Thanksgiving episodes did, and it actually displays some evidence of the strides this show has taken so far in its first season.

The episode also provides a neat mirror to the pilot as the show closes out the first half of its season. That episode ended with a Holt and Peralta in pursuit of a suspect in a storage facility, while this one ends with the two chasing down a bad guy in a rail yard. Yet while in the former, Peralta was still bristling under Holt’s new leadership, this time out it is Holt who finds himself uncomfortable under Peralta’s command. It’s a neat little inversion, and the death threat gives the episode a reason to have Holt and Peralta stuck together in a plot again. This leads to some great moments, like Holt playing Wii and admitting he enjoyed the film Safe House, and its more hackneyed contrivances, like the fact that Holt and Peralta, and then Holt, Boyle, and Peralta, were handcuffed together fortunately did not last long enough to weigh down the episode.

The B-plot, in which Santiago tries to get Diaz to smile for a stupid Christmas card when Holt bans the staff from giving him presents, was mostly another in a long line of thin stories that allow for this cast to bounce off each other, and it worked like gangbusters. This show has gotten increasingly confident about just letting its characters be themselves around each other as the engine of comedy, and it is consistently successful.

Mostly, “Christmas” feels like a fitting end to this half-season of the show, giving vague closure to a lot of the stories we’ve seen playing out so far, to the point where I wonder if this was the last episode shot in the show’s initial order, and thus structured as a possible series finale. Holt and Peralta switch roles to show how both have evolved (Holt even pop-and-locks by episode’s end). Boyle and Diaz move closer together after he takes a bullet for her. Terry is back in the field and ready for action. Hitchcock and Scully make everybody two types of coffee. “Christmas” isn’t boiling with holiday cheer, which is probably smart (even as I love Christmas episodes and wouldn’t have begrudged the show one). But it left me with a smile on my face nevertheless. Brooklyn Nine-Nine has problems to solve, but it has proven to me that it is worth waiting around while the kinks are worked out. The show isn’t great yet, but it may well be on its way.

-“Why do you care what they think? Psychologists are just people who weren’t smart enough to be psychics…”

-“Hello…sir? Do you call each other sir?”

-“This is just like Christmas at my parents’ house. Why do they have separate dining rooms?”

-“I think I really would’ve gotten along with young Ray Holt.” “Yes. That’s why I’ve changed everything about my life.”

-See you all back in this space in the new year!