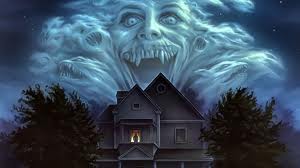 Fright Night (1985, dir. Tom Holland and 2011, dir. Craig Gillespie) I typically wouldn’t lump two films, 26 years apart, in the same review, but I think that Fright Night makes a case for a side-by-side comparison. I also loathe—almost without exception—the rash of horror film remakes, sequels, and prequels that have glutted the theaters in recent years. Most of them either trash all of the wonderful goodwill of the earlier films, typically diluting what made the originals so wonderful, or they try to do something new with an old story (usually in the realm of special effects) and fall flat. But Fright Night lands in its own special category, neither losing the comedy-camp of the original by taking itself too seriously, nor drowning its original’s creativity with computer-generated (and over-exposed) thrills. The original also wasn’t such a huge hit that it has the cultural iconicity of, say Carrie or A Nightmare on Elm Street, to name a few movies whose similar remakes have neither done justice to the original nor brought something new to the screen. Fright Night was never the major hit that drove its story into the cultural consciousness the way those others did, and so in a way, it was primed for a remake—it has a great story that could easily be brought to a new set of eyes without trying to outdo something that was perfect the first time. I have words with most remakes, but not this one.

It is also pretty easy to compare the two as they have almost identical stories—the first time by writer/director Tom Holland, and the second with revisions by Marti Noxon (she of BTVS and Mad Men credits). The story opens with Charlie Brewster (first by William Ragsdale, then Anton Yelchin) witnessing his new neighbor Jerry Dandridge (Chris Sarandon, Colin Ferrell) moving in, and he becomes quickly convinced, to the consternation of his family and friends, that Jerry is a vampire. Strange things begin to happen, and while Charlie knows the answers, and tries to enlist his girlfriend Amy (Amanda Bearse, Imogen Poots) and friend Ed (Stephen Geoffreys, Christopher Mitz-Plasse), he eventually seeks out the help of vampire expert Peter Vincent (Roddy McDowell, David Tennant) to try to take Jerry down. A delightful cat-and-mouse game ensues, dragging Charlie’s mother (Dorothy Fielding, Toni Collette) into the mix.

The original is really genuinely fun, playing on a lot of the tropes of earlier vampire predecessors, and even displaying some of the self-consciousness of these tropes that later horror films would use as their foundations; for instance, the film opens with Charlie watching a vampire film with Amy, and he recognizes the ways that he is acting out some of the things he has witnessed in fiction. And not only does this film still hold up—though it is more of an enjoyable romp than a frightening thrill ride—there are few things that still surpass the quite fantastic remake. Part of that is the fact that this one can’t rely on computers for its special effects, so they are more creative, and yeah, sure, probably more hokey as well, but it doesn’t rely on trying to show its hand at every turn. And even with the less-slick script (and the ridiculous techno-synth score) the actors have thrown themselves into the roles: when the dialogue shows its weaknesses, the earnestness of the performances glosses over them with flair. Sarandon, best known for his 1987 role as Prince Humperdinck in The Princess Bride, shows where he developed his menacing, slow-burning rage, and Ragsdale and Geoffreys are fantastic young actors whose character arcs are fully owned.

The remake takes some of the inconsistencies out of the original script, gives it a nice, shiny, Hollywood patina, and sends it back out with a few more well-known actors, but rather than sinking under this weight, it captures the fun of the original, mostly thanks to Farrell and Yelchin, who are fantastic. Farrell, especially, owns the sexy-creepiness of Jerry in the most energetic and seductive, and genuinely frightening of ways. Poots is a strong replacement as well—though Bearse is beautiful, her acting next to Sarandon is more wooden than the stakes launched at him throughout the film—and she is insanely sexy to boot, making it pretty understandable that the plot goes the way it does. But the best update is the character of Peter Vincent; McDowell is great, and the original’s Vincent is a stodgy academic type whose character works within the scope of the world there, but for Tennant, the role is more of a Cris Angel/rock and roll magician type, and Tennant owns the role—he is hysterically funny, and this character adds so much charm to the remake. He alone could convince me that the remake might surpass the original. It must be said that the special effects and make-up falter under their over-seriousness in this newer version, but this remake feels current without losing the great story and heart of the original.

I honestly find both to be enjoyable, and think that either could be chosen without missing the other one. Watch them both and tell me what you think, or just pick one, knowing that you are either going to get a great, campy 80s classic, or a slick retelling with better music. I don’t think you can go wrong.