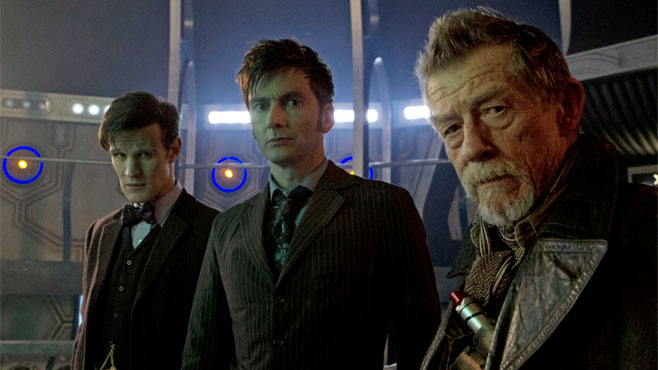 “The Day of the Doctor” had to be a tricky one to write. More so than most episodes of Doctor Who, which is celebrating its 50th year on television, this needed to be both a game changing episode and a tribute to years of entertainment. Think of all the notes Moffat needed to hit, the different fans he needed to please. Knowing that John Hurt would appear as the Doctor along with David Tennant reprising his role as the 10th, fans could assume that there would at least be some fun banter between the Doctors of past and present. To be honest, I’m not a lifelong fan of Doctor Who. I can’t claim to be part of the original fanbase from 50 years ago. I’ve watched all of “New Who” meaning the episodes starting with The Ninth Doctor, Christopher Eccleston. As a fan who goes back just that far, with some basic knowledge of previous Doctors, I found “The Day of the Doctor” struck a perfect cord, providing fans with inside jokes, quick wit, a canon-changing plot and most importantly, a recognition of just how much this one Time Lord has done.

Most of the hardcore fans knew the general story going in – at the end of last season, the Doctor sees an old incarnation of himself, a man he says does not deserve to be called the Doctor. John Hurt’s Doctor (who I’ll refer to as The Hurt Doctor here on out, I can’t keep typing 8 ½) regenerated into a soldier in the time war. He ultimately pushed a big red button on the doomsday device, well, it’s not called that but it might as well be. He wiped out both the Time Lords and the Daleks in order to save billions more. We learn about this Time War starting with Eccleston’s ninth Doctor. It’s something that has been at the pit of the Doctor’s stomach ever since the relaunch of the show. Coming to terms with slaughtering his own people to rid the universe of the Daleks was a major component of the new Doctor and it was gutsy of Moffat to delve deeper.

The 11th Doctor (Matt Smith) is hauled via helicopter to UNIT headquarters. He’s received a message from Queen Elizabeth. Meanwhile, The Hurt Doctor is readying to do the deed if you will. However, the weapon has become so evolved that it comes with a conscience. In this case, that conscience has taken the form of Rose Tyler (Billie Piper) since the weapon figures the Doctor would respond well to a former (actually, future since the weapon admits a screw-up) companion. The 10th Doctor is hinged to Elizabeth as well, only as a lover, or so the Queen thinks. 10’s relationship with Elizabeth has often been mentioned throughout the show and it was good to see them together.

What was interesting about the structure of the episode is that we get a monster story right in the middle. While it seems like padding, it’s necessary to get to the meat of it all. The Zygons, a sluggish shape-shifting race of aliens are trying to take control of UNIT and the universe, by hopping back in time inside a Gallifreyan painting, which are bigger on the inside. It’s kind of wacky, kind of fantasy, but it’s in line with the Doctor Who universe.

Our three Doctors (“The Three Doctors” episode title was taken by the 10th anniversary episode) all join together thanks to some convenient wormholes, sending them all back to Elizabeth’s time where the Zygons are causing havoc. The Doctor looks to his future selves before making any final decisions. 10 and 11 are horrified to see him, The Hurt Doctor is confused to see these younger, almost child-like versions of himself. Putting Smith and Tennant together on screen was about as perfect as most fans could imagine. Moffat gave them brilliant back and forth. They were almost competing to see who could out-Doctor the other, all while the wizened younger Hurt Doctor looked on in disbelief. The struggles between the Zygons/UNIT and the Doctors plus a time-travelling Clara (thanks to Captain Jack’s vortex manipulator) seem kind of empty and strange given the enormity of the episode, but it’s all for a reason. When battling the Zygons, the three Doctors learn that they can use their age as an advantage. By having The Hurt Doctor decide on doing something that could take centuries, it’s easy to have Smith follow through since he’s hundreds of years older.

After taking care of the Zygon problem – which conveniently presents a very similar issue to the Time War (the UNIT director, who is the Brigadeer’s daughter, will kill millions in London to save the World), The Hurt Doctor again realizes that he has no choice. He knows that he has to push the big red button. Millions will die, millions of children will die, but for the greater good. But unlike before, he won’t do it alone. 10 and 11 show up to the cabin in the desert where The Hurt Doctor has decided to push the button. They won’t let him carry that weight by himself. He pushed it and he is all of them, all of the Doctors. As they all agree to go through with it, Clara shakes her head partly in disgust and partly in disbelief. This isn’t her Doctor. Here she is playing the role of all his companions over the years, more so than the not-Rose Rose. Over the course of the history of the show, the companions have always been there to remind the Doctor that he is a healer. When thinking about all of the innocent lives they’ll destroy, Hurt talks about the meaning of the name, Doctor -- “Never cruel or cowardly. Never give up, never give in. The name was a choice.” They can’t do it. They can’t push the button. When one thinks about it – The Doctor would never push the button. He couldn’t.

They remember, almost simultaneously. They have what no other Doctor has had – three of them. Also they’ve got three TARDIS’, which would easily qualify as the greatest army the universe has ever seen. They agree that they, with some help from other Doctors can preserve Gallifrey in a bubble of sorts, freezing them in time. It would protect them from the Daleks, keeping them safe, but lost. Like when they explained it using sonic screwdrivers earlier, they apply the same principle to their TARDIS, it’s been working, calculating for centuries the way it can forge Gallifrey in a time bubble. All of the TARDIS’ zoom in on Gallifrey, all 12 of the Doctors combining their power to find a solution. Or was that 13 Doctors? Never mind. The Doctors shout their battle cry: Allons-y, Geronimo!, and For God’s sake, Gallifrey Stands!

Somehow they’ve done it. As the Doctor always somehow does it. And yes, it’s completely impossible, but no more so than anything else the show has ever done. And yes, it was a bit of a deus ex machina.

After celebrating back in the museum, The Hurt Doctor realizes that by entering their time-stream that he won’t remember his decision to save Gallifrey – he’ll forget. While this seems like a silly cheat to keep all of the past episodes about the doctor grieving relevant, it makes some sense. The Doctor needs to believe he pulled the trigger. His future selves can’t remember saving the day. It isn’t a perfect fix by any means, but I’ll buy that for Smith to get to the point he’s reached, he’ll have to believe that The Hurt Doctor pulled the trigger. They’ll all have to believe. It’s the only way they’ll save Gallifrey in a weird way.

Sitting staring at the painting, 11 ponders its two titles – “No More” and “Gallifrey Falls.: Waiting, 11 considers being a curator at a museum. In fact it would suit him quite nicely. Not many people have his intimate knowledge of history (just ask Queen Elizabeth or Marilyn Monroe). In walks an old man with a booming voice – it’s Tom Baker, the Fourth Doctor. He doesn’t have his famous long scarf, or his striking fedora. He’s dressed as a man of his age. He explains, indirectly, that the crazy plan worked, telling 11 that the painting is actually called “Gallifrey Falls No More.”

The episode closes the only way any episode of Doctor Who can end – looking forward. While this 50th anniversary episode tipped its cap with old lines, old faces and old TARDIS sets, it knows that the beauty of Doctor Who is that there isn’t an end, it goes on and on as long as they can keep making them.

Steven Moffat frustrated me a bit with the last season of the show. It may have been my least favorite of the rebooted show. But “The Day of the Doctor” was a reminder that he still has the firmest grasp of what Doctor Who needs to be. He needs to be the best of us, he needs to be kind, a healer. The Doctor needs to be young and old and unbelievably knowledgeable and sometimes a bit stupid. The Doctor needs a companion telling him to stop when he’s going to far. And of course, Moffat knows that we need the Doctor.

The episode closes with a monologue brilliantly delivered by Smith. He walks out through his TARDIS doors joining the other 11 men who have portrayed the hero. He says: “I have a new destination. My journey is the same as yours, the same as anyone’s. It’s taken me so many years, so many lifetimes. At last I know where I’m going, where I’ve always been going—home, the long way around.” The search for Gallifrey is on and Moffat has made it very clear with this episode – Doctor Who isn’t middle-aged at 50, it’s just getting started.

-I wish we had more of Smith and Tennant together. They were, to borrow another Doctor’s catchphrase – Fantastic!

-Tennant’s big monologue to the rabbit was pretty perfect.

-The portal/wormhole things felt a big easy, but I don’t really care. When one thinks of Doctor Who as more of a fantasy show rather than hard sci-fi, it becomes easier to stomach, even if everything doesn’t wrap up particularly cleanly.

-“Aaaah lovely” when 10 and 11 are comparing glasses

-“You were the Doctor on the day it wasn’t possible to get it right.”

-“I hope he’s dressed less conspicuous this time.” Says Hurt as he regenerates into 9. He was a bit more conspicuous. Unfortunately they didn’t get Eccleston to appear, but its clear Hurt is becoming 9 there. Would have been nice for Eccleston just to appear on there for like a second.

-“I’m only a humble curator, I’m sure I wouldn’t know.” The 4th Doctor being awesome.

-I like the idea of the Doctor searching for Gallifrey. It could mean stories with other Time Lords and perhaps a return of the Master. I’m also curious if Smith will tackle this in the Christmas episode or whether this will be Capaldi’s main arc.

-See you at Christmas for the fall of the 11th! As Tennant said before heading back on his TARDIS, “I don’t want to go.” It’s a line that stings the hearts of Whovians everywhere.