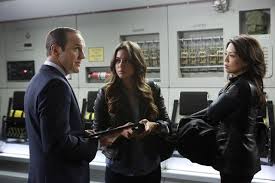 Partly as an experiment, but mostly because law school and my lack of car here make it impossible to get to a movie theater with any regularity, I did not see Thor: The Dark World before watching “The Well,” this week’s Agents of SHIELD episode intended as a tie-in to the movie. Fortunately (and smartly for the show), that omission didn’t matter. Unfortunately, “The Well” is a pretty awful episode of television that no amount of context could salvage.

This episode “ties in” to the movie only insofar as it has a cold open in which the gang cleans up after Thor (which is a great idea and not nearly as funny as it should be in execution) and is centered around an Asgardian artifact that, I assume, has literally nothing to do with the movie except that it is from Asgard. That artifact, a magic staff that turns people into berserkers with super strength powered by untold rage, is theoretically interesting. Unfortunately, the episode does everything possible to squander the potential here.

For one thing, the bad guys couldn’t possibly have less shading. They are from a Norse-paganist hate group (which is, in a lot of ways, a complete misnomer) looking to harness the power of the staff to make themselves Gods so they can take the planet back from the Asgardians. Of course, this ignores the fact that a) the staff does not make them Gods, or make them anywhere near as powerful as Gods, b) the Asgardians are not around, and in fact have very clearly left Earth by the time this episode starts, and c) killing human beings and destroying human property is a really weird way to start your campaign against Asgardian oppressors who are neither oppressing you or likely to notice you’re killing your own side in a theoretical war in a terrible attempt to get the attention of aliens light years away who wouldn’t give a shit even if they did notice.

But hey, its ok, because “The Well” has a real live Asgardian here to liven things up. He’s some bad-ass warrior, like Thor right? Probably got some cool weapons and talks in that mannered style and is all around awesome, yeah? Oh. Oh. Did you want him to be cool? Did you want him to fight things, or to be at all like any other Asgardian we have ever seen? Sorry about that. He’s Peter MacNicol. That bookish guy from Ally McBeal. I love MacNicol, and loved him on that show, but this is a huge misstep. In addition to that fact, Agents of SHIELD literally presents him as a character who used to do cool things. He used to be a warrior. He used to travel the world having adventures and seducing women. Now he just sits around in a suit and sort of leers at Simmons once in a while.

“The Well” is pretty much a parody of Agents of SHIELD. Want cool super hero action? Sorry guys, that’s for the movie you should have seen. Want a bad-ass alien God? Well, here’s a timid guy in a suit. Want three-dimensional characters, logical plotting, or villains that have motives that make even a lick of sense? HAHAHAHAHA. You’re watching the wrong show, pal. This is the “bland, cardboard cut outs of characters, going through the motions of a plot that someone barely thought through when they realized Joss Whedon was not going to respond to their text” department. I can transfer you, if you want. Maybe over to any other show?

Once again, the show tries to shade its characters and proves completely inept at doing so. Brett Dalton, it is fair to say at this point, is just not a very good actor, and Ward’s backstory here is both muddled and not nearly as haunting as the show seems to think. He…left his brother in a well one time? I assume his brother drowned because of this, but we do not know who the other kid in the flashback is, what Grant’s relationship with either of them is, or, ultimately, even that this killed his brother. It just seems like Grant was either kind of a dick or bullied into submission one time, I guess.

Unfortunately, Grant’s ineffectiveness has started to bleed over. I was a huge supporter of Agent May back in the early weeks of this show, but at this point, it seems like speaking in clipped sentences is pretty much all she’s got going for her. Rather than gaining depth as the series goes on, May seems to be receding further and further from focus. We know she’s had it rough. We get it. Tell us how, or why, or give us anything more about her than that she’s troubled and stoic. Just…just be better, Agents of SHIELD.

Ultimately, this show seems to think all of the work it is doing is far more effective than it is. It thinks Simmons’ trauma from her near-death experience resonates. It doesn’t. It thinks Grant’s backstory will suddenly make him the haunted hero the show clearly wants him to be. It won’t. It thinks we are endlessly invested in the mystery of what happened to Coulson and how Tahiti is related to it. At this point, I don’t give a shit, and I don’t trust the show to make the payoff worthwhile. If anything cool happened, they’ll probably just bring Peter MacNicol back so he can sit casually in a chair and say, “Yeah, this was a really awesome adventure, but I’m not going to tell you more or show it to you at all.”

At the end of this screed, I want to leave you with this: Agents of SHIELD sucks right now, gang. And the deeper we get into season one, the more I am beginning to think it isn’t going to get better. When even the elements I used to like (Coulson, May, Skye) are starting to sour and grate, the show is in trouble. It needs to pull out of this nosedive quick, and I’m not sure the people at the controls know how to do it, or even that they are seconds from crashing into the ground.

-Why is everyone in Norway speaking English? Does the show really think the 30 seconds of those park rangers talking to each other being subtitled would make people change the channel?

-“Lots of bones. Let’s see what we can dig up. See what I did there?” This is what passes for banter on the show at this point. Jesus fucking Christ.

-“Did I fall asleep?” “For a little while.” Really, Agents of SHIELD? We’re just flat out lifting from Dollhouse at this point? Actually, now that I think about it, I would probably like this show better if, next week, it just became Dollhouse.