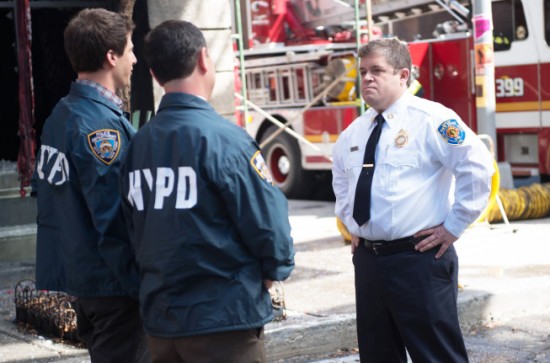 The central joke of “Sal’s Pizza” is pretty much an exact replica of a much better Parks and Rec joke, writ less effectively. The rivalry between the Parks Department and the Library on the latter show is hilarious in part because of how completely absurd it is; libraries are generally nice, tranquil places, and hating them allows our heroes on Parks and Rec to make a lot of great jokes about their vitriol for these houses of literacy and all the generally nice things they stand for.

That the cops of the 99th Precinct might hate the local firefighters, due to jurisdictional issues and a lack of respect on both sides for the work the other’s do feels, well…expected. Which undercuts the main joke of the episode just a bit. It isn’t inherently funny that Peralta hates Fire Commissioner Boone (Patton Oswalt, who felt underused here, but will hopefully return to make good), and most of the gags (cops like donuts, firefighters love riding down the pole) were too obvious and hackneyed to really land.

Yet, honestly, I think “Sal’s Pizza” is perhaps the best episode of Brooklyn Nine-Nine to date. The A-plot is mostly just the same Peralta story told yet again, and Boyle’s love of food and rankings is already wearing a bit thin (though maybe I’m still just grossed out I had to watch Joe Lo Truglio spit pizza into a bucket tonight), but Samberg felt even slightly dialed back here, and it made the episode go down a lot smoother for me. Add in two cut-away gags with him that were actually funny and not just mugging, and he becomes more tolerable than I’ve seen in most episodes to date.

But the real achievements here are in the B-plots for the episode, which are both funny and effective character pairings. Watching Gina and Terry search for an IT Director was mostly a chance to let Chelsea Peretti riff and Terry Crews try on his straight-man shoes, but both acquitted themselves well. Ultimately, this plotline resolves in the most obvious way (both in that it shows Gina is competent and that it leads to hiring the hacker as the new IT consultant), but it was often very funny on the way there.

Finally, Diaz and Santiago squabble after Santiago discovers Diaz was offered a position as Captain in New Jersey. This plotline actually took character traits we were already aware of and did some work deepening them: Diaz has a rough exterior, but is ultimately incredibly loyal and hyper-competent. Santiago is insanely ambitious and competitive because of her upbringing. Where the attempt to give Peralta depth (his Dad abandoned him) mostly fell flat for me, these smaller moments worked wonders.

At this point in its run, Brooklyn Nine-Nine has two pretty large problems. Its main character is its worst character, and its plotting always feels lazy or at least too neat and conventional. The former may be solved as Samberg adjusts to the role, and even tonight I found him funnier and less grating than in previous outings. The latter will hopefully resolve as the writers move away from stock plotting and actually begin to explore these characters. Yet the largest potential problem for the show was nowhere in sight tonight. Because “Sal’s Pizza” was very, very funny. And if Brooklyn Nine-Nine can keep me laughing like this, a lot of its other problems are going to start looking a lot smaller.

-“Gasoline.” “I’m pretty sure that’s water. Only one way to tell.” “There were more ways to tell!”

-“Ms. Diaz, are you here to reconsider? We bought the deputies bullets like you suggested!”