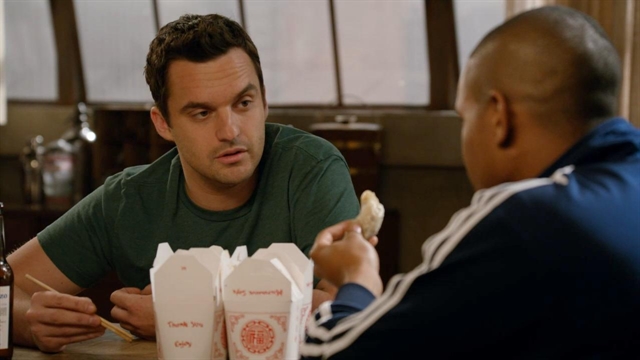 Hurrah! Coach is still here! Since last week’s return of Coach, it’s been announced that Damon Wayans Jr. is sticking around for the rest of the season. In all likelihood, it’s going to be a test run to see whether he can stick around permanently. On one hand, he’s a very talented comedic actor. On the other hand, the more Coach, the less time someone’s going to get every week. In “Menus” Coach is determined to show he’s still got what it takes to earn his nickname and that pushes a sad-sack Schmidt to the side while Nick tries to end his dumpling-eating ways and Jess drags a “Jason Street”-ified version of Winston to a Chinese restaurant to prove that people (mainly Jess) can still make a positive difference in this world.

After Principal Booger (I shall only refer to him as this for all time) shuts down Jess’ ocean conservation field trip, she is determined to end a small, yet annoying, environmental injustice – those damn takeout menus that are slid under their door. In New York, I’d often get a pile of these menus thrown in a pile on the ground near the entrance of my building. A waste of paper? Definitely. A reason not to eat a dumpling? Hardly.

While Jess is stumping to end this menu epidemic, Coach tries to get Nick to start working out and end his slovenly ways. While I admire Nick’s ability to eat dumplings for breakfast without shame, it’s not exactly the worst thing in the world to work out a little bit. Of course none of these goals from the three key characters this week is really about menus or dumplings, it’s about telling themselves they’ve still got it.

Coach admits to Nick, after pretty much failing to get him aboard the fitness train that he’s felt off since his breakup. Can he be a good coach anymore? Jess lets down her class and one hot dog hat-sporting kid who believed in Jess’ brand of wide-eyed optimism. In doing so, she’s let herself down. This is who she is, a force for good. At least that’s how she views herself.

All of these problems are resolved fairly easily – a kick in the butt from Nick for both Jess and Coach is all they need. Jess uses the restaurant’s owner’s obsession with promoting the store against him and figures out a way to parlay that into funding a field trip. She gets the transportation sponsored by Hop Foo. Nick describes the disconnect between him and Coach/Jess as doers and dumplingers. Maybe Nick will never be the go-getter that Coach and Jess are, but he definitely doesn’t think that they should sit on their asses and eat Chinese food all day. That’s Nick’s job. Somebody’s got to eat those dumplings, but Jess needs to do good and Coach has got to coach.

While Winston’s small role in the episode was relegated to essentially a prop (Jess used his allergy to MSG against the restaurant owner) Schmidt’s tiny role in the episode felt bigger than the amount of screen time would suggest. Since moving across the hall, Schmidt’s become a bit of a sad bastard. Seeing the gang in the loft having lots of fun has only made things worse. Nick is starting to (try) working out, something Schimdt’s wanted for years and Winston is in a wheelchair with slurred speech. What fun he’s missing out on! I’m missing out on some of the fun Schmidt provides the apartment, but perhaps this is all just a needed detox from the stinky story that was the double-dating.

Putting Nick and Jess’ relationship aside for the week and letting them not fight over something stupid was a nice break and hopefully those stories will come back a bit stronger down the road this season. So while “Menus” felt like a standalone episode, it delivered some nice character notes. Jess is still the force for change that she works on being, Nick is Nick – a dumplinger who is both good and bad at motivational speech and Coach is intense but driven. Schmidt desperately needs to be a member of the group and hopefully he’ll come back to the fold like the good ol’ days. We’ll be needing some more substantial Coach stories or he’ll turn into Winston, who was not necessarily insane this week, just a punchline confined to a wheelchair. More than anything “Menus” was a good start for Coach and a solidly funny episode from a show that’s trying to find the incredible highs of season two. It’s a shame that a solidly funny episode of television sounds like a bit of a dig at a show, I just know New Girl is capable of being much better than it has so far in season three. That said, I have confidence to stick by this show for the foreseeable future and defend it as one of the best sitcoms on the air. Now I’m gonna go eat some fucking dumplings.

-Restaurant owner to Jess: “Chinese food is MSG. America is living a lie, and we distribute menus so people order the food!”

-Schmidt begrudgingly getting swept up in Coach’s workout music is a nice bit of physical comedy.

-Coach doesn’t really have words when around CeCe other than exclaiming, “Breast!” Maybe the two of them will have a thing, further sending Schmidt into a spiral of sadness.

-Yay! Steve Agee back as the bum outside their apartment.

-UGH Ford product placement UGH. We get it, you can open the fucking trunk with a swipe of your mangled foot, Winston.

-Ultimately, I enjoyed that the episode ended with all of the loft folks acknowledging their love for each other, and Winston getting buried at the beach.