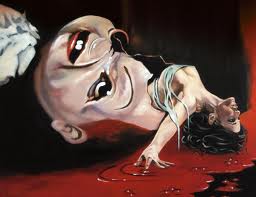 When I sat down to write this review, I was convinced that I was going to talk about Dario Argento’s 1977 film Suspiria. I’ve seen that movie a million times—it has become one of my favorite horror stand-bys, and its combination of crazy weirdness and gorgeous visuals is oddly soothing to me. But everyone knows Suspiria, and it routinely tops “best of” lists every year around Halloween. It is also wildly divisive—those stunning visuals, creative kills, and that famously heart-socking score by Goblin often aren’t enough to cover for a wildly inconsistent script, some cheesy dialogue, and insane dubbing. So, while I recommend that every horror enthusiast check out Suspiria at some point to form one’s own opinion, I’m skipping over it here because part of why I find it so soothing is that it doesn’t stick with me the way that Argento’s Deep Red does.

While Suspiria chronicles a young woman’s strange experiences at a ballet academy, Deep Red spreads its wings much further. The film opens with the tableau of a kitchenette table next to a Christmas tree while a child’s voice is heard singing—a warm and festive home—that is disrupted by shadows on the wall illustrating a brutal murder. A bloody knife is dropped on the ground, and cautiously approached by what appear to be a child’s shoes. What follows is part mystery, part supernatural horror, beginning with a seminar on paranormal psychology wherein a beautiful psychic, Helga Ulmann (Macha Meril) is able to see that the murderer is in the room. She narrates the scene that we have just witnessed to the audience, and we are temporarily placed in the shoes of the killer, who is driven from the room in a panic. It isn’t much later that Helga is herself similarly dispatched, and her death is witnessed by her neighbor, jazz pianist Marcus Daly (David Hemmings), who senses that something is amiss, and who distrusts the police inspector placed in charge of the case. He teams up with a beautiful and headstrong journalist, Gianna (Daria Nicolodi), to try to track down the murderer, along with the help of Helga’s associate Dr. Giordani (Glauco Mauri).

Their trail, beginning with that eerie music of a child singing, leads them from Helga’s home to journeys across the countryside, tracking the killer who seems to be one step ahead of them at all times. There are hints that these may be stirring from beyond the grave—perhaps even rooted in history and folktale—but despite his sensitive nature, which Gianna is always challenging, and threats to his own life, Marcus moves forward, driven to find Helga’s murderer, and convinced that there is something that he has witnessed in Helga’s apartment, which he cannot remember.

The treatise on memory and repression that the film posits is one of its most interesting points, and when combined with the downright chilling imagery (I would love to describe some of these things for you, but it would seriously sound like Bill Hader’s Stefon was listing off the aspects of one of his strange and glorious NYC outings, and so are best left experienced firsthand) and gorgeously constructed scenes, the film spends much of its time convincing you that you have no idea what you have just seen. That uncertainty on top of the mystery structure is used so effectively here: as viewers, we are positioned to always know just a bit more than the characters about what is happening in each scene, setting us up to anticipate things before they can and making us that much more scared for them. But because we never know just quite what we have seen, we aren’t allowed to be certain about even how to fear for them. It is an unsettling experience, to say the least, and Argento’s use of dubbing and lightning fast movement between multiple languages works to further emphasize this slippage (and it works much more effectively here than in Suspiria in my opinion). Argento’s use of space, insane set-pieces, bonkers sound-editing and color—dripping, saturated, 1970s color—just jam themselves into my head; his compositions are unshakeable and his kills are exceptional.

There is gore, there is gorgeousness, and there is another fantastic score by Goblin (Argento’s go-to for terror-inducing soundscapes)—there is also psychology (and, frankly, a habit of pathologizing everything from feminism to homosexuality), and genuine mystery and suspense. There is also an understanding that we have to dig deeper into the past and face those things that we can’t quite grasp. What more could you want?