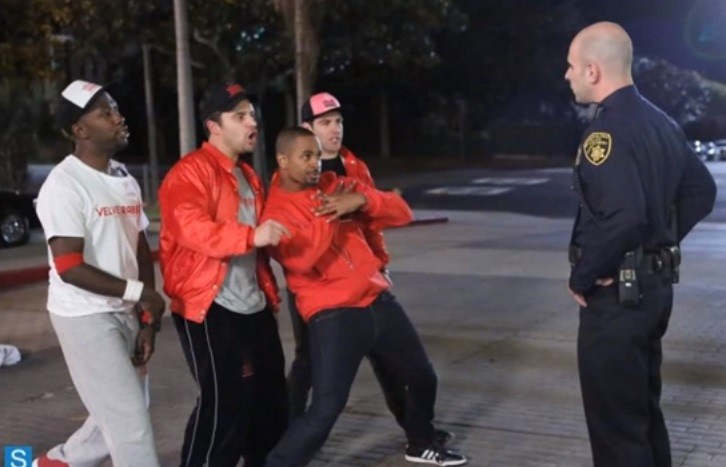 Coach is back! Coach is back. Coach is back? These three reactions coursed through me in the 22 minutes that was “Coach”. Damon Wayans Jr. comes back to the apartment after leaving the show following the pilot. He had a role on Happy Endings and now that that show has been cancelled, right in its prime as I’ve heard, it gives Wayans an opportunity to return to New Girl. I’m not sure why, but I felt excited to see him back, even though he was literally only in the pilot and quickly written off the show. I’ve always enjoyed the fact that New Girl didn’t just forget that he existed, often referencing him throughout the series.

Coach is reintroduced as a party-guy. This is shown in a hilarious cutaway of the four guys singing “Rock You Like a Hurricane” with a mariachi band while getting plastered. This is fun. Coach is fun. I like fun. I like Coach. LOGIC! And when the old friend returns in the cold open, I’m on board. Coach shouting, “You sons of bitches ready to paaaaarrrrtaaaay!?” I was ready, dammit.

While I’m always game for more development in Nick and Jess’ relationship, I was ready for this to be more focused on Coach, getting to know a character who we haven’t even spent an hour with as viewers. This turned out to be relegated to the B story as the focus of the episode was given to the issue of Nick wanting to not appear whipped to his friend. While I don’t think Jess would normally have a huge issue out of Nick going to a strip club (maybe I trust Nick more than she does) it is not unfair of her to not want him to go. Coach is used more as a plot device rather than the character I want to hang out with. He’s so fucking fun after all. It eventually turns into the issue of the “girlfriend-boyfriend” discussion. Rather than a real growing opportunity for Nick and Jess, this seems like sort of a made up issue in the relationship – which is actually part of what Jess brings up. They haven’t had the conversation, but do they even need to?

So if Nick goes to the strip club, Jess is gonna explore “seeing other people” since they haven’t had the conversation about being exclusive. Of course, when Nick goes to the club he feels bad (because, hey, he fucking loves Jess which we all know). CeCe calls a guy Jess has found, ahem, interesting and it’s Taye Diggs so the guy’s a god on Earth. We know Jess was never going to do anything with him other than giggle at his otherworldliness, and that’s all well and good, but doesn’t get many laughs. The much funnier half of this relationship war was with the boys at the strip club. Winston drops $2,000 on bunny money and the crew decides to go after the guy that is now dating a deeply depressed Coach’s ex-girlfriend.

Obviously, Jess doesn’t do anything that would make us feel bad about her relationship with Nick. She only dips her toes in the Taye Diggs waters and of course, Nick doesn’t do anything a good boyfriend wouldn’t do. So when he gets home to find Diggs naked in bed, he wisely believes Jess that nothing weird happened. Nick sucker punching Diggs in the face was a nice touch, and the couple made up and are totally boyfriend-girlfriend now. This week wasn’t bad, but felt like a missed opportunity. Let’s get to know Coach, for real this time. We learned that he’s not as tough as he would lead people to believe on the surface, but that’s really it. Hopefully he’ll be around often, so we can finally paaaarrrrrtaaaayy.

-I love Schmidt totally missing what everyone else understood about Raiders of the Lost Ark.

-Jess finding a note of Nick’s: Put on pants….?

-I did like seeing the four guys step up vs. the cop and then all run away together. It’s great to see the loftmates come together as a group, it was kind of reminiscent of the pilot actually.

-Diggs doing his business in bed was pretty hilarious too, but I don’t need to ever see him again.