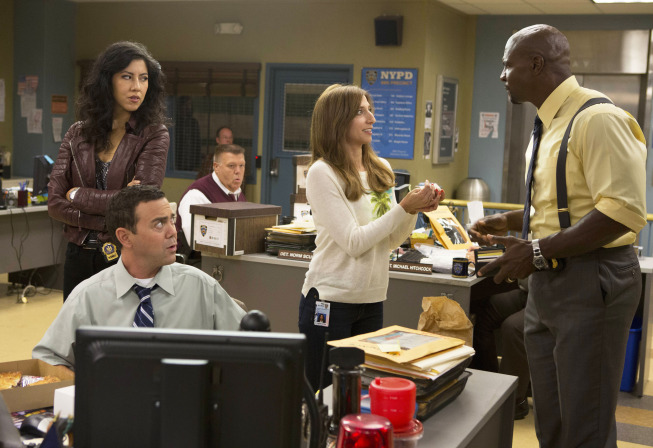 In its early episodes Brooklyn Nine-Nine has been stuck rigidly to the basic plot structure I’ve outlined in this place before. Peralta does something immature or inconsiderate, it threatens to derail an investigation, the rest of the gang rallies around him, and everyone learns a lesson about how to be a better cop from Holt. “48 Hours” is a reasonably funny episode of the show, but its also somewhat dispiriting for how little the show seems prepared to deviate from its formula.

For one thing, it is sitcom 101 that your main character does not always need to be the star. Jake Peralta has been the center of every A-plot the show has done so far, a fact that is not helped by Andy Samberg’s spotlight-hogging lead performance. There are a lot of pretty good characters on Brooklyn Nine-Nine, several of whom could easily graduate into great characters given time and a little more room to breathe. Yet this show is consistently hiding its best jokes and its best characters around the fringes of every episode to make room for Peralta, and it is hurting the show week-to-week.

Peralta does his Peralta thing and arrests a former collar whose M.O. he sees repeated in a heist without a shred of evidence to support bringing him in. That Peralta, a career detective, would not be aware of the 48 hour window that becomes the center of this episode is pretty ludicrous, but the show doesn’t particularly care to make Peralta seem like a good detective in any realistic way. Peralta has moments of genius, but they are so thoroughly surrounded with moments of incompetence I have no idea how he would ever have made detective.

So the station rallies around Peralta and settles in for a 48 hour marathon investigation that seems to require nothing more of any of them than sitting in the office (except for Scully, who gets to go to the Jersey Shore, but doesn’t get any salt water taffy). This premise does however, allow for a fun Rosa-Gina subplot in which they fight over which place has the best pies in New York and for Terry to fret about his giant brother-in-law who emasculates him.

Both of these are good storyline ideas, but neither of them gets the requisite screen time to develop from amusing in theory to outright hilarious. This show clearly has a lot of good ideas, and a strong ensemble to carry them out. It is just still stuck in that early sitcom era where it fears straying too far from its central character. This is a problem for a lot of early shows, and one Brooklyn Nine-Nine will have to get away from eventually. It’s just occasionally frustrating to see a bunch of talented, funny people struggling to make the best of a tiny amount of screen time while Andy Samberg plays the same basic story beats again and again.

I have been open in this space about my reservations in regards to Samberg, but the this is one part of his performance that is not his fault. That Peralta has only one story arc and it is repeated ad nauseum like the television equivalent of Groundhog Day is a writing problem, not an acting problem. And again, this is not a death knell for the show by any stretch of the imagination. This is a problem that plagues a lot of sitcoms in their early episodes that just happens to be exacerbated here by how narrow the formula has been from the start.

This episode gives little moments to pretty much everyone, whether it’s Santiago faux-flirting with the picture of the perp with the soul patch or Boyle’s reaction to Peralta revealing his bike has a little basket on the front (“how else do you expect me to carry baguettes?”), but those moments further illuminate how much talent is sitting on the bench on this show every week due to its focus on Peralta. This is the sort of problem that could be solved next week, should the show decide to give someone else the spotlight for a chance or do another ensemble piece like “The Vulture.” But for now, it is a problem.

-“I’m just kidding, I need a lot more information, but that would’ve been a great exit line, right?”

-“I know everyone’s mad at Peralta for ruining their weekend…” “But?” “That was it. I was just demonstrating so that Peralta would know what a fact was.”

-“A lot of fat guy clothes have racist overtones.”

-“You’ve changed. You used to go straight to prison!”

-“Who cares what he thinks? You’re a police sergeant. You’re a grown man! Now take your nap, and if I see the lights on in here, I’m going to be very disappointed.”

-“Let’s just arrest this guy. Who even cares anymore?”

-“Yeah, but I have to prove I’m not selfish, so I don’t care what they want!”