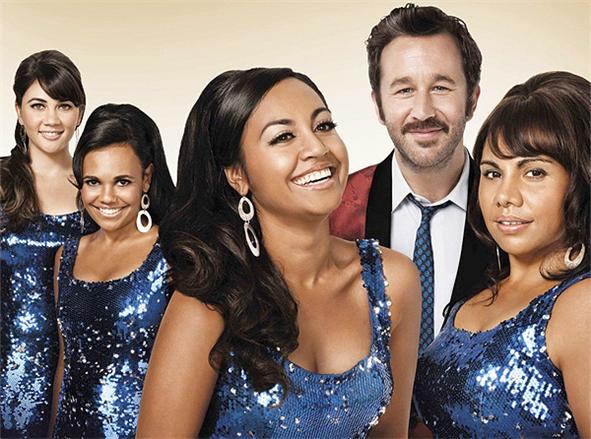 There is probably no way that The Sapphires will be able to escape comparisons to 2006’s incredibly successful Dreamgirls—both films track the rise of female soul singers, and both originated as stage plays—but similarities seem to end there. While Dreamgirls is a fictionalized account of the ascendancy of Motown and The Supremes in America, complete with original music and a bevy of American film awards, The Sapphires’ focus is much more transnational, and, though technically a financial success after its premiere at Cannes (out of competition), it has not enjoyed as much of the limelight. Its budgetary (and sometimes script) limitations shouldn’t steer you away from this feel-good underdog film, though; it is much more complex and moving than it sometimes has the right to be, and it is filled with gorgeous renditions of some of the most fantastic soul music you have ever heard. It is not to be missed.

The film opens with a few notes about Australian history that might surprise American viewers who aren’t as familiar with race relations in other countries, including information about how the Australian government, prior to the 1960s, routinely abducted light-skinned Aboriginal children from reservations and placed them in institutions to teach them “white ways” in an effort to erode Aboriginal culture. With this information and a reminder that it is inspired by a true story, the film begins with a group of four young Aboriginal women singing a local song to their friends and family, only to be interrupted by the arrival of government officials who cause the crowd to scatter in fear. We are then moved forward in time to 1968, where three of the girls from the group, Gail (Deborah Mailman), Julie (Jessica Mauboy) and Cynthia (Miranda Tapseil) are now grown women, preparing to perform at a local singing competition, emceed by drunk and disorderly Irishman Dave Lovelace (Chris O’Dowd), in front of a hostile and racist crowd. Despite absolutely killing their rendition of Merle Haggard’s “Today I Started Loving You Again,” and blowing their competition out of the water, the girls lose, and Lovelace explodes in disbelief. He is subsequently fired from his emcee job, and as he packs his things to leave, Julie approaches him with an ad seeking musicians and performers to go to Vietnam to entertain the troops. Lovelace agrees to help manage the girls through the audition process in Melbourne—where they pick up their missing fourth, their cousin Kay (Shari Sebbens)—and to help transform them into soul singers.

This film has a lot of the trappings of the typical rags-to-riches singing group film (see also That Thing You Do, among others), including the requisite performance-improving montage, various love interests and misunderstandings, and in-group jealousy, even going so far as to point out at times how it is using these tropes (at one point, Lovelace hangs a sign around each woman’s neck, designating their “role” in the group—“lead singer,” “the sexy one,” etc). But it also has a lot of things that most of those types of films don’t have. It is about an Australian Aboriginal all-women soul singing group who performs American soul songs in Vietnam for troops from all over the world, and on top of gently exploring these international connections, it also doesn’t shy away from the complexities of the race relations of the 1960s, both in Australia and the United States. Kay has been separated from her cousins by the Australian government because of her pale skin, and before she joins up with the group, she is living as a white woman in Melbourne. Her past resurfaces with many complications, including tensions with the hardheaded Gail, who can’t forgive Kay for some of the slights in their childhood. Kay’s desire to reconnect with both her childhood and her Aboriginal roots is one of the stories that makes this film so unique, and so moving.

Though there are times when it seems like this movie has bitten off more than it can chew (there is no way it could thoroughly deal with all of the racial complexities alone, not to mention the weight of portraying the experiences of the troops in Vietnam), it does an admirable job at not overly simplifying the struggles of these women and the people they encounter on their travels. There are also times where it can veer into using pathos perhaps a bit too much, and you will certainly see some recognizable set pieces wherein you know exactly how you are supposed to react before anything has even happened. It is difficult to know if these tear-jerking moments are done effectively, or if they are just so burdened with emotional resonance that you are crying just because you have been taught that this is the type of thing that should make you cry. As I was watching, I wondered at times if I wasn’t succumbing to emotional blackmail—one scene in particular, when the very young and scared Julie (who has been emotionally unprepared for what she would experience in Vietnam) falters at leading the group in an a cappella rendition of Wilson Pickett’s “If You Need Me” in front of badly wounded soldiers at a hospital, had me questioning whether or not this film had earned my reaction, or if I am just a sap. But as I worked through the rest of the movie, I found that I cared so much about these women and their relationships that even if some of the things that landed were not fully realized, most of them were, and I wanted to keep spending time with both them, and O’Dowd’s brash Lovelace—strong character development, in this case, roundly cancels out a few trite moments.

And even if you don’t like the story or the history lesson, you should watch this for the singing. Holy cow, the singing. While Mailman, Tapseil, and Sebbins have voice-doubles do the singing for them (and spectacular voices they are), Jessica Mauboy’s real voice is used for Julie’s performances, and this woman has some serious pipes, and more soul than a stack of Motown records. The group covers hits from Marvin Gaye, The Staples Singers, and Smokey Robinson, among others, and Mauboy slaughters them. Chills abound. It is too bad that this one didn’t get the traction and representation in the US that it deserves, because it should have a fierce following; hopefully its place on Netflix Instant can bring some viewers to this sweet and hopeful story.

After success writing and directing Saturday Night Live and Beavis and Butt-Head all throughout the 90’s, Mike Judge hit gold with 1999’s Office Space. That movie brilliantly and hilariously captured the hell of working in corporate America (be it in white-collar offices or chain restaurants) and its climax gave viewers the fantasy fulfillment of burning it all to the ground that allowed them to go back to those tedious jobs the next day. Ten years later, Judge attempted to capture that same zeitgeist with another workplace comedy, Extract. He gathered a solid cast of likeable comedians and character actors, including Jason Bateman, Mila Kunis, Kristen Wiig, Ben Affleck, J. K. Simmons, Clifton Collins, Jr., David Koechner, Beth Grant, and T. J. Miller, and he set the story in a flavor extracting and bottling plant, focusing on job tedium, management/staff relations, and suburban malaise. Seems like a solid recipe (ha.) for another hit, but one of the things that he forgot to do was make any of his characters likeable. The problems in this film could all be resolved with simply talking honestly to another person, but the egos and pride of these men and women prevent them from doing anything that remotely resembles reality—and that is exactly where it misses the mark. While Office Space might be hyperbolic in its portrayal of corporate jobs, it is firmly grounded in real annoyances and workplace dynamics, and starting with that connection to reality is what makes its over-the-top ending seem well earned. With Extract, not only is it only intermittently funny, there are no consequences at all for the horrible ways that these people treat each other. It is hard to care about what happens, and then when nothing really does, you feel like you just watched the ineffective hijinks of the worst people in the world. You deserve better.