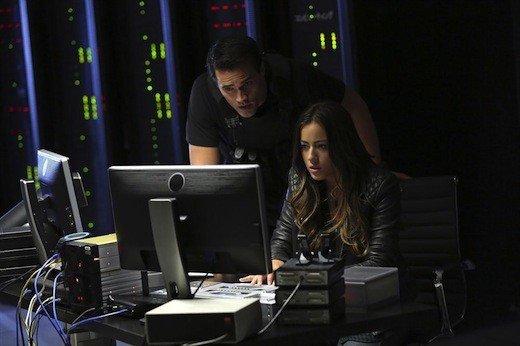 On the surface, the show is structured like any Whedon show before it. A small band of outsiders, loosely bonded at first but growing closer together through adversity, fights against an unusual threat that may destabilize the universe if it isn’t stopped. In loose terms, this describes Buffy the Vampire Slayer, Angel, Firefly, Dollhouse, and Agents of SHIELD. Yet there is a theme that has grown more and more dominant in Whedon’s work that this attempt to clone his previous successes without his diligent presence lacks. The other Whedon shows are about outsiders, rebels, even terrorists fighting against a dangerous status quo that has asserted itself and threatens to do more power through its dominance.

Buffy, it can be argued, deals with this obliquely by making its heroine a woman doing battle against male-dominated systems, from the Master’s cult in the show’s early episodes to the Watcher’s Council, the Old White Guy-centric bureaucracy that threatened to keep her from doing her job with its officiousness (Even when the villains are women, they are lashing out because of the ways they have been harmed and oppressed by men). The chief nemesis of the protagonist on Angel was a law firm that infiltrated the corridors of power and turned our systems against us for its own ends. The status quo reasserted itself again and again on that show, and always to the benefit of the powerful over the powerless. Firefly is a thinly veiled allegory for a post Civil War United States where the victors overstepped their bounds in their efforts to create a perfect society. The shows heroes are functionally former Confederate soldiers living in a society they fought to destroy and a system that contradicts their firmly held beliefs. As the show transitioned into the feature film Serenity, it became even more aggressively a story about individual rights versus collective oppression and the dangers of government overreach. Whedon’s themes were similar, even if they became more overtly subversive. The show asked us to question not just the systems we found unjust, but the ones we might inherently agree with. It gave us the point of view character of Simon Tam, who was raised under Alliance rule and had benefitted substantially by it, and it thrust him into a position where he was forced to question the means by which his privilege was garnered and propagated.

Finally, Dollhouse took a cast of characters so oppressed their literal humanity had been removed from them, and it asked them to fight against the people who stole their agency. It framed its main character (or at least, the woman she was before she was lost to the human trafficking analogy that is the Dollhouse) as a literal terrorist, using bombs and fear tactics to combat a faceless corporation hiding evil behind its anonymity. The heroes of Dollhouse are all, in some sense terrorists, but the show makes true the aphorism “one man’s terrorist is another man’s freedom fighter.” The way we define the two is all a matter of perspective, a matter of who is fighting and who they fight against, and finally, a matter of who wins and writes the history.

Which brings us to Agents of SHIELD, a show that shares a lot of superficial similarities with all of those shows, but where the dark, shadowy government officials who have everyone under surveillance, who black bag suspects in violation of their constitutional rights, and who choose indefinite detainment or death over traditional procedures of justice are the heroes. The show pays lip service to the idea that we should be ambivalent about all of this, but ultimately, its clear what side we are intended to be on. The Rising Tide are bad guys. Freedom of information is dangerous. Surveillance keeps you safe, no matter the costs. Five episodes in, these are the messages Agents of SHIELD is delivering. I wonder if Joss Whedon is watching. If so, I wonder what he thinks.

“Girl in the Flower Dress” is a bit of a clunker, heavy handed in its attempts to return us to the Rising Tide vs. SHIELD debate, pretty uninteresting in terms of the case-of-the-week, and downright dreadful when it comes to the dialogue, which is the one thing this show really had going for it in previous weeks. Even the set pieces tonight are underwhelming, with the final showdown between SHIELD and Scorch feeling more like the boss level of a video game than the climax of an action show. The plotline repeats and barely extends the Extremis arc, which feels more like fan service to the idea of an eventual serialized narrative more than an important aspect of the episode. One of the reasons this review has turned into “The Grand Theory of Whedon” more than an actual discussion of Agents of SHIELD (and apologies, if you wanted me to speculate on the meaning behind the titular outfit) is because this episode of television just isn’t that interesting.

Even when the show reveals Skye’s big secret, a moment which should be huge in terms of character development and even shifting the status quo of the show, it falls almost completely flat. Skye infiltrated the most advanced intelligence agency in the world on the backs of a huge network of hackers because…she’s an orphan looking for her parents? The show really better have a great reveal up its sleeve in this regard, because at this point, I couldn’t care less about what was, one episode ago, one of the show’s ongoing mysteries. Dollhouse rocketed from solid procedural to excellent serialized drama in its sixth episode, “Man on the Streets,” when the show pulled an “I never thought they’d go there this soon” move and then committed to it with gusto going forward. That was a stellar episode of television on its own, but it was a turning point in the series because the show ran with the shift in its status quo.

Here, the status quo reasserts itself by the end. Skye reveals her deception, Coulson is stern, and she is still on the team, now without the interesting wrinkle that she might be a double agent, or that she’s hiding her real motivations for being there. In this way, “Girl with the Flower Dress” becomes emblematic of the way Agents of SHIELD betrays the things Joss Whedon stands for as a creator. There’s nothing daring about what this episode does, no experiments in form, character, or even dialogue. There is a status quo, maintained by the powers that be at all costs. “Girl with the Flower Dress” asks us to cheer for the people who maintain the system as it is, and who use all available means to keep people in check. The villain of the episode, Scorch, is right that SHIELD kept him functionally a prisoner for years, but the episode never has anyone outside of him mention that fact, or question the righteousness of the mission. At this point, only villains question SHIELD. Even Skye, our resident skeptic, has drunk the kool aid and sings SHIELD’s glories. We are supposed to celebrate the death of a man who had been oppressed, shame Skye for the way she tried to conceal anything from the surveillance state, and laugh when Coulson leaves a man he had just bankrupted and functionally imprisoned penniless on the other side of the world. A few weeks ago, the best I could say about Agents of SHIELD was that it was fun. Now, though, I have to say it’s made me just a little bit sick. Who is SHIELD, really? Who are the people we are supposed to be rooting for? What is it they do, and are we ok with the fact that they do it? Should we be? These are the questions the show should be asking. Unfortunately, those are exactly the kind of questions its characters are shutting down from 9 to 5 every day. And sometimes, in Ward’s case, even once he goes off the clock.

-“When someone breaks into my house, I usually don’t invite them to stay. But that’s me.”