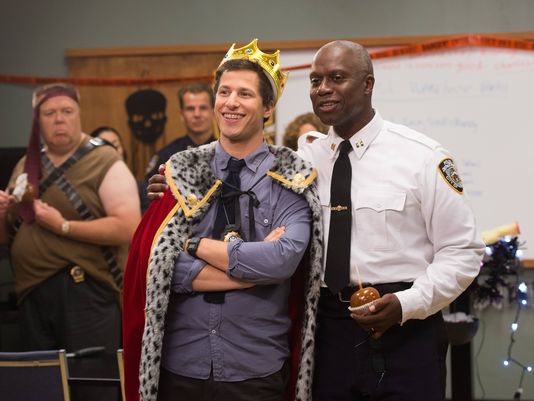 Virtually nothing about tonight’s episode of Brooklyn Nine-Nine worked for me, and yet, I left “Halloween” with my hopes for the show’s future slightly raised. Every single storyline tonight is an overworked stock trope, most of which have even become seasonal clichés for holiday episodes. The one thing the episode got right, however, was finally breaking the increasingly tired format of the “Holt tries to teach Peralta a lesson and Peralta is humbled” story. This week, Peralta finally gets one up on Holt, successfully stealing the medal from his office and winning their bet. It is the simplest possible evolution of the show’s central dynamic, but it is an evolution nevertheless, and the show’s willingness to change things up even slightly bodes well for its improvement over the course of the season.

The relationship between Peralta and Holt has formed the core of Brooklyn Nine-Nine to date, and its repetitiveness has been, if not problematic, at least slightly grating. As we’ve discussed before here, most sitcoms tend to play with the same basic format until they figure out how to grow from there, but there are better and worse formats, and the structure of these early episodes was not flexible enough to stand long term. This problem isn’t really fixed by inverting the conclusion, but it at least shows that the writers recognize the formula they have created and the potential of inverting or playing with it.

The larger problem with the Holt/Peralta pairing is one I expect not all viewers ascribe to. The idea of throwing the stoic Holt against the manic Peralta is a smart one comedically, yet Braugher and Samberg don’t have a whole lot of chemistry, which tends to mean that, rather than pinging off each other as the best comedic teams do, only one of them is allowed to truly land comedic punches in any given interaction. Part of this problem stems from Samberg’s performance, which hasn’t yet calibrated to the sitcom setting. His particular strengths are very well suited to sketches, Lonely Island songs, and bit parts in movies, but he hasn’t yet figured out how to star in a sitcom. Some of this is likely the writers not yet being sure what to do with him other than have him play to the rafters, a problem that will likely be solved with time (for a similar example, look at the way Parks and Recreation evolved Leslie over the course of its second season to fit more with the show’s tone and with Amy Poehler’s varied comedic sensibilities). Some of the problem, though, lies with Samberg, who understands how to play Peralta as an immature prankster and egomaniac, but hasn’t yet discovered the comedic potential of self-delusion. He is playing Peralta as if the character is as funny as he thinks he is, and that actually undermines some of the comedic possibilities here. There are plenty of jokes to be mined from Peralta’s immature antics being more annoying than funny, but either the writers, Samberg, or both have yet to learn this and exploit its potential.

The rest of the stories are basically left overs from the stock sitcom plot pile, warmed over only slightly by the show’s own sensibility. Brooklyn Nine-Nine has a viewpoint, which is an important thing for a sitcom to develop, but in order to make these sorts of stories work, that viewpoint needs to be strongly asserted. The joke, for example, in which no one recognizes Boyle’s costume and everyone shouts sort of reasonable guesses has been done dozens of times before, and without a spin, its simple presence in the episode doesn’t really elicit a laugh. Similarly, the “Santiago hates Halloween but Boyle loves Halloween” plotline is completely flaccid, turning its one point of interest into a throw-away gag instead of mining it for the theoretical pathos. Santiago hates the holiday because of course a cop would hate Halloween, but why Boyle loves it is actually interesting. He doesn’t love Halloween because of fond memories or sugar rushes. He loves it because of the way it bonded he and his friends together when they were terrorized by bullies. There’s an opportunity for the show to develop Boyle further with this, but instead it is treated as a throw-away gag and we quickly move on. Considering Brooklyn Nine-Nine comes from a creator of Parks and Recreation, I know the show is capable of pathos, but it has yet to really tell a story with a stronger emotional connection than “this should be funny to you.”

Then there’s the Terry/Diaz subplot, which actually tries to develop Diaz as a character, but ends up doing a disservice to both of them in the process. If you were to ask me to give you the most clichéd sitcom background for Diaz, it would be that she was a good student and sensitive artist in her youth who eventually became tough and who is ashamed of her goody two-shoes past. So imagine my surprise when that exact fact is treated as a shocking comedic inversion as if it is not the most predictable backstory imaginable. Frankly, it would be more surprising on a comedy like this if Diaz had a tough upbringing and earned her street smarts and harsh exterior from serious emotional traumas in her past. Add to this the fact that Terry, the character the show has most developed as a sensitive soul in a comically buff body, spends the episode mocking Diaz for her sensitivity instead of bonding with her over traits they both share, and its just kind of a mess.

“Halloween” isn’t a good episode of Brooklyn Nine-Nine, but again, there’s a light at the end of the tunnel here. The Holt/Peralta dynamic is flipped on its head (even if this is done in the most conventional way imaginable), Boyle and Santiago are a pairing the show hasn’t tried out yet, and the episode does honestly do some work developing Diaz, even if the work it does is disappointing. I didn’t like most of the things the episode tried to do, but I liked that it was trying to do them, and I hope that, going forward, it keeps the attitude of “Halloween” and the humor levels of some of the show’s better outings.

-“Why should I listen to you, bone person?”

-“Are you trying to jam pigeons into my air conditioning vent to flush me out of my office?”

-“I wasn’t supposed to talk but I got so excited about that astronaut!”