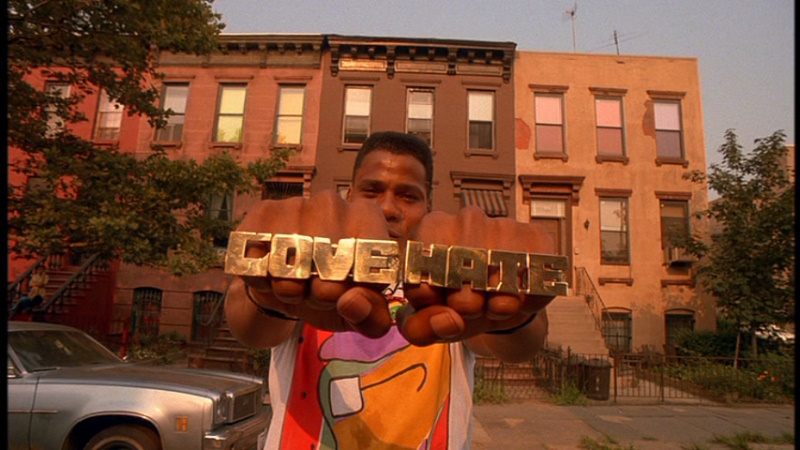 When I sat down to watch Do the Right Thing last week with a friend, I was honestly unsure of what to expect. I realized as the movie was starting that I had only seen one other of Spike Lee’s films previously (2006’s Inside Man, a taut and capable heist movie) and snippets of a few others—hardly a sound foundation from which to pass judgment on a director’s most well known and lauded film. I’m now so genuinely glad that I finally watched this movie—and that Netflix decided to make it available on Instant last month—because it absolutely holds up to all of the praise it garnered upon its release, as well as serving as a time capsule for late 80’s/early 90’s culture.

The story itself is simple, and the structure of the film is one that many other directors have attempted (to varying degrees of success) over the years: covering one sweltering day in Bedford-Stuyvesant, Brooklyn, the movie follows Mookie (Spike Lee), a pizza delivery man, from job to job, but often the action splits off from Mookie to explore the interactions between the other inhabitants of the neighborhood, including Italian-American pizzeria owner Sal (Danny Aiello) and his sons Pino (John Turturro) and Vito (Richard Edson), Mookie’s sister Jade (Joie Lee) and his girlfriend Tina (Rosie Perez), and a local drunk called Da Mayor (Ossie Davis), among many others, including turns by Martin Lawrence, Ruby Dee, Samuel L. Jackson, and Frankie Faison. As the day progresses and the heat wave rises, tensions begin to mount between the various groups of people who inhabit the neighborhood, especially as racial differences are addressed. These encounters come to a head as Radio Raheem (Bill Nunn), Buggin’ Out (Giancarlo Esposito) and Smiley (Roger Guenveur Smith) protest Sal’s business practices, leading to a brawl and eventually police “intervention.” There is a lot more to say here about the plot—it is intricately woven between the many different characters, and it explores a myriad of ideas, opinions, and worldviews without ever necessarily privileging one over the other, tackling a lot of things that many Americans would wish to avoid talking about—but to delve too much deeper into specifics would be to spoil what is, even now, almost 25 years later, an incredibly fresh and invigorating (not to mention provocative and complex) film-viewing experience.

The performances are incredible across the board, but what makes this movie’s exploration of such complex themes so stimulating, and at times confrontational, is Lee’s writing and direction choices. Camera angles go askew to unsettle the ways that the viewer is approaching different encounters; there are moments of direct address to the camera that are challenging and aggressive in beautifully complicated ways; moments of lightness and humor both soothe other points of disquiet and illuminate the tensions writhing just barely beneath the surface; and there is a brash and gorgeous mix of color and contrast in almost every scene.

There are two things that made this movie for me, though: the first is Lee’s use of “real world” referents to draw attention to the fact that even though the events in this film are fictional, they are not without historical precedent—they are firmly entrenched in the very real experiences of very real people. The other is that Lee isn’t at all interested in giving the viewer an easy way out, or a simple solution to the problems this film is bringing to light. Rather than take the Paul Haggis/Crash route and say “look, everyone’s a little bit racist,” Do the Right Thing gives even the least represented character some emotional depth and background to show the historical inequities that have led them to their beliefs about how they relate to the others around them. The film also does what many others tackling the issue of racism in America do not: it explores the structures of power that are keeping these inequities in place, and it doesn’t dare tell us that there is one right way to fix the problem. It is, like the subject it is tackling, complex, and its refusal to simplify is what makes this film so incredibly important.

This is not to say the movie is without its problems—the representations of women, for instance, leave a few small things to be desired, and Smiley, who is mentally disabled, is portrayed in a roundly ham-fisted and insensitive way. As we were watching, my friend and I kept saying to each other, “I just don’t know what to do with Smiley,” and the best we could come up with was that frequently in the 80s and 90s (and arguably today as well) disabled characters served as a way to help explore the other characters (if you are nice to the disabled person, then you are a nice person, etc.) and so they become a trope of character development, rather than characters in their own right. In a way this is unfair to the film, because even though Smiley is this type of character in some regards, he also serves a much deeper role; I have to leave this one still bothered by his portrayal but cognizant that Smiley’s beliefs and interest in exploring the contrasting teachings of Dr. Martin Luther King, Jr. and Malcolm X, and his inability to express what he finds in the intersection of the two, are what, in the end, this film is all about.

Apparently I will watch just anything with Adam Scott in it (see previous two “Avoid Instantly” installments), but I’m learning now that this isn’t a very good approach to finding something actually worth two hours of my life (see previous two “Avoid Instantly” installments). In this absolutely tone-deaf exploration of what rich, beautiful, white people go through to “have it all,” Jason (Scott) and Julie (Jennifer Westfeldt, who also wrote and directed this waste of time) decide to have kids together, despite the fact that they are (supposedly) not romantically interested in one another, in an attempt to avoid all of the complications that they see plaguing their settled married friends, Leslie and Alex (Maya Rudolph and Chris O’Dowd) and Missy and Ben (Kristen Wiig and Jon Hamm). It is pretty obvious that the plot is entirely predictable from the start, and while Westfeldt is lovely, she doesn’t have the chops to hang with the ensemble she has built. But the most egregious offense is thinking that there is any way to like, or care about, the characters in this movie. They are cartoonish, and they barely like one another, so it seems a bit much to ask complete strangers to want to see how they end up (seriously, if I met these people in real life, I would stab myself immediately so that I could be rushed to the hospital, and far, far away from their toxicity). Love, Actually is streaming too—better re-watch that one again, and skip this grumpy atrocity.