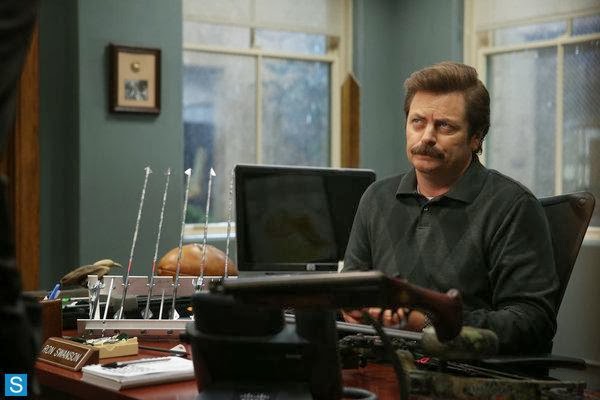 “Gin it Up!” was much more effective at character work than a three-plot episode has any right being, but Parks and Rec pulled it off this week. Between Leslie exploring her relationship with Donna (yay! More Donna!), Ron dealing with his will and hence his own mortality and how he wants to raise his new children and Tom and April working in cahoots to ask out Tatiana Maslany’s Nadia, there was something for everyone. Maybe having a week off from Chris and Anne did the show some good.

With the recall election around the corner, Leslie continues to deal with attacks from her opponents, namely Jamm, who I still think has been one of the show’s misguided characters. He’s pure evil and I think Jon Glaser should be given a bit more to work with other than pure evil. It might work for a one-off episode like with any of the Tammys, but he’s been one of the most consistent recurring characters since his introduction. Thankfully, the recall business was just an introduction to the real problem, Donna’s dissing Leslie all over twitter (#bitchboss). She finds Leslie to be annoying and that kind of makes sense. Donna likes to blow off some steam and Leslie is a bit upset by this. Once Leslie comes to her senses and realizes that she can be a bit stifling and even annoying, she makes amends with Donna. On the other side of the conflict, Donna shows her appreciation for Leslie backing her up in the kerfluffle involved with her tweeting some inappropriate stuff on the Parks twitter account. Anyone who follows Retta on Twitter knows she’s too good at it in real life to ever make that type of rookie mistake.

The Twitter scandal, dubbed “Twitter Watergate”, was also a great look into trumped up controversies that are more about scoring political points than accomplishing anything of real importance. Jamm is the perfect straw man for politicians who hold hearings to boost themselves up in the public’s eyes. Leslie and Donna, after agreeing to disagree on some things, agree to just bail on the hearings over the controversial tweets. It’s a quick fix, but it made the point that people should take these types of inquiries with a grain of salt. Sometimes they’re just not worth it.

After Ben discovers that Ron does not have a will other than what he wrote as a child (“Upon my death all of my belongings shall be transferred to the man or animal who has killed me.”), he convinces Ron to see a lawyer (at the perfectly named law firm Babip, Pecota, Vorp & Eckstein) to make a real will. After Ben stumbles through some wonderfully awful ‘will’ puns, Ron reveals he has a massive estate which he refuses to just give up to his kids. It totally makes sense that Ron has both a huge amount of money (likely buried throughout the town) and no desire to have his kids inherit it. He doesn’t want his kids to think they don’t have to work to earn their money. Ben ultimately convinces Ron he can have the best of both worlds – leave his kids a safety net but also instill the values in them that they need to work for their money. It was also touching that Ron placed Ben and Leslie as a close second on his list for people to take care of the kids in the event that a man or beast can destroy him and translate the symbols on his old will.

Tom’s love story I’d say falls in third place, but not by much as Ansari brought out the charm and April made for a great companion in his quest to win the heart of Nadia, a doctor without borders (or as Tom refers to it – a D without B’s). After snapping into an English accent to try to impress Nadia, April tells him he’s got to cut it. He keeps trying to keep his new love interest stuck at the Parks department hoping to make her fall for him…somehow. When she bails on Tom and April (they are insane) he is even more sure that he is really in love with her. Eventually, they go to her hospital and assure her the park she wanted to reserve has been saved for her mobile hospital. In a great bit of junior high relationship strategy, Tom forces April to take all the blame for the weirdness and hijinks at the Parks department. But April smartly just tells Nadia how Tom feels (the image of his mouth agape is something I’d like to have a still of hanging with respect in my apartment). Somehow Nadia finds Tom’s weirdness charming (it kind of is) and she agrees to go on a date with him. Here’s hoping those two get some more time together – giving Tom the first REAL relationship on the show.

So a lot of ground was covered this week and it was pretty funny to boot. Cheers to Parks and Recreation for giving Donna some time to really shine and Tatiana Maslany seemed to gel well with Ansari and Aubrey Plaza, even if she was just kind of playing the straight woman. Ron was Ron and that’s all a Parks and Rec fan ever needs. Finally, Leslie was called on her….let’s say overbearing style of management and friendship. This week was yet another example of how strong a handle this show has on its main characters, a skill that’s kept it appointment viewing into its sixth season.

-Of course Maslany is best known for her breakout role as a bunch of clones on Orphan Black. She’s stupendous on the show (and even does her own English accent that might even be better than Ansari’s!)

-Ben’s puns: Good Will Hunting and Where there’s a will, there’s a way. I like that they continued the joke that accountants tell shitty jokes that they really enjoy.

- While I’ve found the whole recall election story kind of dull, there’s no denying the comedic power of a farting Leslie Knope doll.

-The law firm name is a tip of the hat to baseball nerds and fans of advanced baseball statistics – Babip stands for batting average on balls in play, Pecota stands for Player Empirical Comparison and Optimization Test Algorithm which was developed by the one and only Nate Silver and Vorp is Value over replacement player. The Eckstein is referencing David Eckstein, who is kind of the bane of stats people since he’s so often lauded for his “gritty, gutty” play even though his stats have nothing to back that up. His praise is usually derived from the fact that he’s a short white guy – a highly praised group in baseball, even if they don’t deserve it.