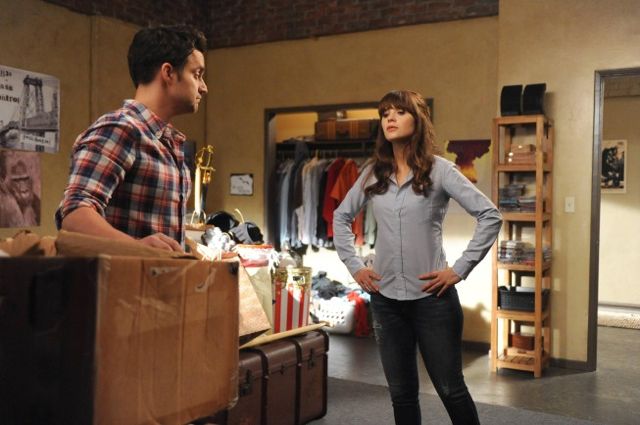 While “The Captain” gave us the first great step forward in the development of Nick and Jess, “The Box” tried again and came up short. The “opposites attract” nature of the relationship is part of the charm of Nick and Jess (any hope of making a cutesy couples name has been fruitless on my part, as Jick sounds like some sort of racial slur and Ness sounds like a variant on the Loch Ness Monster). With “The Captain” we saw real growth in Nick, a man who has often shown a Peter Pan-esque aversion to the realities of being an adult. Last week, it was about opening up, sharing his feelings and learning that was OK and maybe even pleasurable on some level. However, the immature Nick we see in “The Box” is fairly charmless and his assertion that Jess trying to help him pay his bills (and essentially move somewhat toward being an adult) is stifling who he really is feels obnoxious. Nick is kind of a lovable slacker, but when he acts like a dick to his girlfriend and his other housemates, how can I sympathize with him on any level?

After Jess fesses up to paying some of his bills and basically saving him from financial ruin and a life of being squashed by debt, Nick flips on her. Maybe when Nick’s easy-going lifestyle is kept more in the abstract it is much more tolerable. But when Nick made a plea for Jess to stop trying to “fix” him, it felt like a teenager saying, “You’re crushing me and I hate you!” to an exasperated parent. I think the show knows that Nick is better than this and he eventually goes to the bank to start a checking account. While the point here is that Nick is trying to grow into a better person, it uses a poor example in the bank/inheritance/bills story. Jess trying to pay his fucking bills is not about “fixing” him; it’s about keeping him functional as a human being in a world of bills. What I’m trying to say is, the choice to grow Nick as a person is a logical tactic for the show going forward, but “The Box” should have been filled with something else – something that didn’t have me rooting against Nick from the very beginning.

While Nick’s unlikeability was new this week, New Girl is still trying to figure out Schmidt, who is literally asking people if he’s a good person this week. Still reeling from his double breakup, Schmidt seeks help from his rabbi (Jon “It stinks!” Lovitz). His rabbi tells him its important to care about others for a change. He happens to walk out of the synagogue and save the life of a choking cyclist. Still, Schmidt needs people to tell him he’s a good man. When he forces the man he saved to tell him this, he realizes that bad things still happen to good people, so why be good? It’s a weird story that doesn’t redeem Schmidt much to me. Winston eventually explains to Schimdt that he did a bad thing, but that doesn’t necessarily make him a bad man. He just needs to try to be better. Good advice from a strangely sane Winston. What Schmidt seems to take away from the conversation is that he isn’t a monster, which is basically all he wanted to hear. Not sure if this was a real learning moment for Schmidt, but maybe it’s a step forward toward him not being a bit of an ass in the coming weeks. Basically, can’t New Girl get their guys to stop being so jerky?

-This episode was going to get a C, but Jon Lovitz said, “Are you kidding? I went to camp. They called me the octopus.”

-Woodward vs. Woodwork was great between Nick and Winston, but seriously, pay Winston back.

-Also the episode gets some bonus points for Max Greenfield’s rendition of the Shama after saving the cyclist.

-Like Schmidt’s rant on the type of purses he thinks guys want to see on ladies.