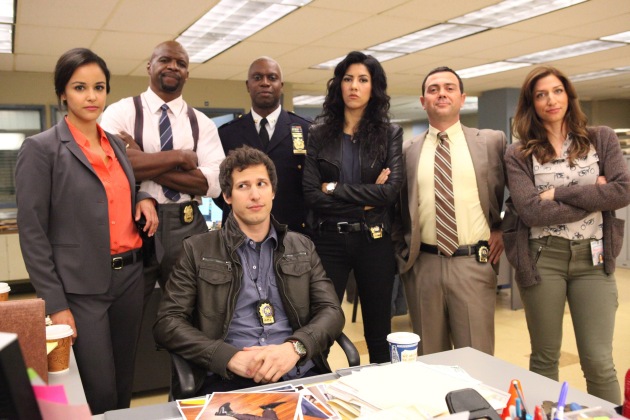 The word sitcom has a pretty obvious meaning to anyone who thinks about it for even thirty seconds (or who knows it is derived from “situation comedy”). There is a premise, and that premise, along with the characters that populate it, becomes the backbone of the show. Lucy wants to break into show business. Darren wants Samantha to stop using her powers (because, sexism, I guess?). Everybody wants a place where everybody knows their name. Stir, repeat, and wait for the syndication checks to start rolling in. At this point in its run, Brooklyn Nine-Nine is especially formulaic within its episode structures. Each week has a lesson for Peralta to learn, and the conflict is resolved by him improving ever so slightly. This isn’t a bad thing, necessarily, and in fact, in a sitcom’s early going, sticking to the formula tends to allow more room for the laughs. “The Vulture” isn’t perfect, but it is pretty funny, and it allows for some actual character growth, even if once again its limited to the section of the episode without Andy Samberg.

The Vulture of the episode’s title is Detective Pembroke (Dean Winters) from Major Crimes, who always steps in and asserts jurisdiction when cases are almost solves, taking the glory for himself. Peralta gets vultured, seeks revenge, and in the process learns the lesson Holt laid out succinctly at the beginning of the episode. It’s almost like Sesame Street, but with Andy Samberg taking plaster castings of his butt.

The best thing about this plotline is the way it basically just throws the majority of the ensemble in a room together and watches them cook. They go from a bar to a bus to the crime scene they have drunkenly broken into, and in the process we get to see them all bounce off each other across several different situations. This is the sort of thing Community does incredibly well when it throws the whole group around the table in the study room and just watches them. Brooklyn Nine-Nine isn’t quite there yet, and most of this episode has the same pairings bouncing off each other that we’ve seen every episode so far, but this shows promise as a story format for the show to pick up and play around with going forward.

Once again, the subplot in “The Vulture” eclipsed the A-plot comedically, though it was admittedly closer this time out. Holt takes Terry and Gina to a firing range to trick Terry into becoming re-certified so he can get back in the field, and the show seems to recognize it has three of its strongest players in close quarters here. Holt is all calm collection, asking for advice on how to tweak his stance, while Gina continues to be an insane person, trying to scratch her nose with a live weapon and offering realistic police badges to anyone who calls her cell phone. Between them, they push Terry to realize he hasn’t been the sergeant he needs to be and get him to take the shots. Crews is excellent this week, managing to combine Terry’s soft-heartedness and his ability to be a complete bad ass without making it feel incongruous. Terry has been the butt of a lot of jokes so far in this series, but “The Vulture” shows us why he has made sergeant and how he demands everyone’s respect.

“The Vulture” is a strong offering for the show. It has two plots that boast laughs, gives one of its characters a lot of room to grow, and actually has stories that reflect off each other instead of feeling stitched together like some stock-plot Frankenstein’s monster. Peralta, Santiago, Diaz, and Boyle learn to work together (while Scully is out of breath and Hitchcock farts a lot), and Gina and Holt demonstrate the power of teamwork by getting Terry back on the road to field work. Brooklyn Nine-Nine is still obviously a sitcom in its early going, but “The Vulture” is the first time I have been actually excited for what this thing might look like down the road.

-“It was like having sex with a transformer.” “That is no one’s fantasy.”

-“He probably wants to talk to you about how your shirts aren’t tight enough, probably.”

-“Yes, Boyle. I put that together. From context.”

-“The last two percent is the hardest to get. That’s why they leave it in the milk.”