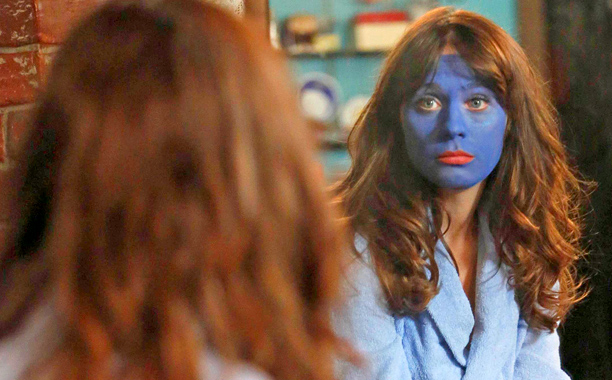 While “The Captain” felt so in line with New Girl’s excellent second season, it was also something that could never exist in last year’s breakout campaign—it delved into Nick and Jess’ relationship as a couple. Now the season premiere suggested (over and over) that the two were “all in” on the relationship. While that signaled the show was ready to have these two stay together, it didn’t explore the relationship beyond the fact that these two were attracted to each other and shared some amazing chemistry.

Freed from the bonds of a dubious storyline, Schmidt is reeling as the only single, non-insane member of the apartment. Sorry Winston, you’re still fucking crazy. Schmidt vowed to break up Nick and Jess and he’s sticking to his plan. To trip up the honeymoon, Schmidt easily slips into Nick’s head, setting off a string of events that plays out like the best possible version of one of those kooky films about older couples with an eccentric therapist getting them to love again. Except this proved funny, revealing and charming. The charm of this show is so strong, but had been lacking so far this season.

Once Schmidt gets in Nick’s head by simply repeating, “overthinking” over and over, Nick is rendered impotent. A well-placed montage of Jess trying to awaken Nick’s, *ahem* groundhog, makes for one of the episode’s better sequences. Troubled by this, Jess inadvertently shares Nick’s problem with Schmidt who is happy to lend a hand by explaining a sex position that’s sure to snap Nick out of his funk. The gag of the blender washing out certain parts of the explanation with other intermittent parts (“…you want to clean yourself off immediately. I mean, immediately…” and “…how comfortable are you with racial slurs…”) revealed add “The Captain” to the great real-sounding, but definitely not real things like “True American”.

After horrifying Nick with “The Captain” the two go after Schmidt for trying to screw up their relationship. Schmidt points out he’s only thrown a pebble in their way and they’re already having problems. But, in the most important part of the episode, Nick opens up. It was alluded to earlier in the episode, but Nick has always been repressed with his feelings. Nick makes a decision to open up for the good of his relationship with Jess. He starts with small things, like how the Captain was totally not OK. But he keeps going and Jake Johnson plays it so perfectly. With each bit of information that spills out of Nick you see a weight lifting. A smile comes across his face as he talks about how he loves the cello and rap songs that use choirs. Jess’ face also brightens. It felt like a real step forward in their relationship, the first real step we’ve seen them make together as a couple and it felt damn good.

While Schmidt played unintentional couple’s therapist, he also made an effort to reach out to CeCe, leaving a note under her doormat. Now with a new guy, she used it only to spit out her gum. Schmidt is a true romantic, and this keeps him from being just a horny douche. He loves sex, but he wants true love and I think his wanting to break up Nick and Jess was a fine development for just one episode. While I hope his schemes to spoil the one happy relationship in the loft come to an end, single Schmidt is an asset to the show. Greenfield play’s desperate very, very well and we’ll likely see much more of that in the coming weeks.

“The Captain” felt very much like the first step in the new direction of New Girl even though it took that first step in terms of plot mechanics in the season 2 finale. However, the tone felt spot on while the Nice-Jess relationship felt equal parts wacky and true to life. This looks like the beginning of a beautiful relationship.

-Sorry Winston, you were the Weakest Link, goodbye. Sorry, I’m not sure where that 10-year-old reference came from. Usually Winston’s insanity can be good for laughs, this week it was good for very little. He wants to have his cat have sex one more time before being neutered. He asks out a fellow cat owner, Riki Lindhome, one half of the very funny group, Garfunkel and Oates. Lindhome was underutilized as a woman who thought she was getting a date with Winston, but was actually just setting up a fuck session for their cats. I hope she comes back so we can get her to be a part of the crew, I feel like she’d fit in.

-Some things Jess tries to wake up Nick’s dick: reading an Indian food menu, reverse psychology, Jess dancing, she has to paint her whole body blue like a smurf and a punch in the face.

-“Nick’s body is so soft, it should absorb sound.”

-My favorite line of the episode: “I really like the instrument of the cello.” The construction of that sentence and delivery by Johnson is perfect and charming. Nobody but Nick would say he likes the cello that way.