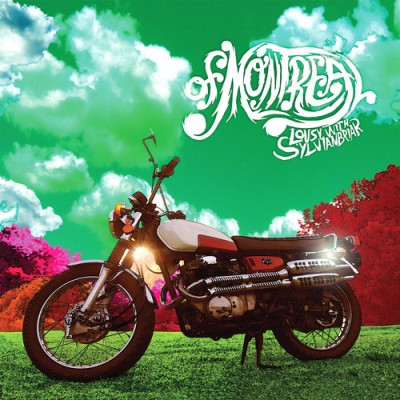 Of Montreal are a band whose style has changed an incredible amount of times since their inception. What started as frontman Kevin Barnes with an acoustic guitar singing cutesy songs (see Cherry Peel and The Bedside Drama: A Petite Tragedy) became Kevin and a few friends making silly-sounding tracks that were usually vignettes about made-up characters (see The Gay Parade and Coquelicot Asleep in the Poppies: A Variety of Whimsical Verse). After this, the band started getting in a more psychedelic rock sound with Aldhils Arboretum, Satanic Panic in the Attic, and The Sundlandic Twins. They kept this sound for the first half of Hissing Fauna, Are You the Destroyer?, before introducing Barnes’s sexualized and Prince-inspired alter-ego “Georgie Fruit” on the second half. Georgie Fruit went on to be the star of the following two albums Skeletal Lamping and False Priest, though he was retired for the darker and experimental Paralytic Stalks. With all of these varying sounds, it was anyone’s guess as to what their next album would be like.

As it turns out, Lousy With Sylvianbriar shows of Montreal returning not just to their own roots, but also to a retro 60s and 70s inspired psychedelic rock sound. Granted, of Montreal have always toyed with this style, particularly in the early-middle part of their discography, yet Lousy With Sylvianbriar is their first album that applies it without the cutesy feel, electronic layering, and copious falsetto fans have come to expect from the band. Sure their trademark bass sound is still there and Kevin Barnes’s voice is still identifiable, yet the album as a whole is much more stripped down and mellow than anything they’ve released in the past decade.

Right off the bat listeners are treated to the Rolling Stones-sounding “Fugitive Air,” which has a country-rock guitar riff that hasn’t been heard from the band since Aldhils Arboretum. Barnes’s vocals have a bit of a raspy quality to them in the first part of the song, before switching to a more sedated tone where he sings lines like “I’m a walking mausoleum, the scent of rotting flesh” and ends with the most defeated-sounding chorus of “la la la” imaginable. If there’s one thing of Montreal have perfected (that arguably The Smiths started), it’s masking really bleak lyrics amidst cheery, upbeat melodies./n/n After this excellent opener comes the dreamy-sounding “Obsidian Currents,” which has a guitar part highly reminiscent of “Sun King” by The Beatles and features Barnes using his quieter singing voice heard on tracks like “City Bird” (albeit with a slight David Bowie accent added). Yes, I know I’m throwing out a lot of classic rock references so far and am honestly no whiz on 60s-70s music knowledge, but the album really does make its influences that clear. “Hegira Émigré” sounds a great deal like Bob Dylan’s “Tombstone Blues,” complete with Barnes singing nonsensical lyrics in a monotonous drawl. “She Ain’t Speakin’ Now,” meanwhile shows him taking a page from Neil Young during its chorus. Barnes produced the album to have the sound of this era, and I rightfully cannot imagine any review not namedropping at least one classic rock band or singer to get their point across.

Classic rock comparisons aside, the album has an interesting structure; roughly half the album consists of higher energy, faster tracks, while the other half consists of slower, quieter psychedelic songs. I’ll admit that going back and forth between the two at times does disrupt the flow of one track to another and sometimes kills the energy, but that doesn’t mean the mellow tracks should be dismissed. It can be easy to oversee how dark this album is in terms of its content, and you might not realize that the calm-sounding “Colossus” opens with the line “Your mother hung herself in the National Theater when she was four months pregnant with your sister who would have been thirteen years old today. Does that make you feel any less alone in the world?” However, it’s pretty much impossible to ignore Barnes when he belts “The last ten days have been a motherfucker, I’d don’t know if I’d survive!” at the beginning of following track “Triumph of Disintegration.” Livelier tracks like these do steal the limelight on an album by a band known for their energetic, over the top performances, but Barnes does show a knack for letting his voice and lyrics take center stage on songs where the instrumentation range is more limited (see: “The Past is a Grotesque Animal”).

For a band that seems to barely go a year without releasing something, it can be easy to judge of Montreal for emphasizing quantity over quality. I personally felt like the bar had been getting lower and lower since 2007’s amazing Hissing Fauna, Are You The Destroyer? and things just about hit rock bottom with the compilation Daughter of Cloud that came out last year. But this should make Lousy With Sylvianbriar all the more noteworthy in their now 11-studio album strong discography. It may not be the best album that Barnes has ever put out, but it will be sure to bring back fans that called it quits when Georgie Fruit took the scene and had long been hoping for a return to their psychedelic rock roots.