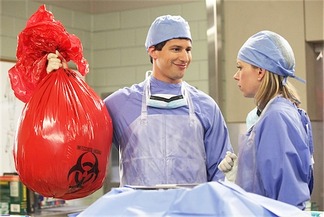 Let’s all bow briefly at the altar of Andre Braugher. The man is an incredibly gifted (and, to my mind, underrated) dramatic actor with incredible comedic timing that has rarely been properly utilized before. Yet as Captain Holt, Braugher is a revelation. The main source of his character’s comedy is his stoicism, and in fact, a recurring gag tonight has various members of the team completely unable to read him. There is more to this performance than just beautifully executed deadpan, however. What’s amazing is the way Holt displays genuine disbelief at the actions of his employees. It isn’t just that he finds them lacking or unprofessional; he truly cannot understand what motivates people who are not as tirelessly driven as himself. This adds an additional comic dimension to a character who is largely stuck playing straight man, and it makes Braugher’s performance more than just a simple matter of restraint. He has to convey the perfect amount of disbelief at any given moment, and he does it perfectly.

The Holt-Santiago runner tonight feels like more than the sum of its parts because of the way Braugher manages the variations in Holt as a character. When the joke is that he’s unreadable, he varies the lines so slightly it is almost unnoticeable. Yet he can also dress down Scully and praise Santiago while feeling completely consistent. That latter moment, when he appreciates police work done right, is effective because of how slightly he modulates his reaction. He softens Holt, for a moment, and because of how stiff he has been so far in the series, its an incredibly cathartic development. We, like Santiago, feel an abiding urge to fist pump.

The A-story, where Peralta tries to learn how to play second fiddle to Boyle, is far less effective than the runner. I know this early in the show it is hard to justify departing from the basic formula of “Peralta confronts one of his own shortcomings and learns from his mistakes,” but damn if it isn’t getting old very quickly. When Mary Elizabeth Ellis (who, unfortunately, I will always know as The Waitress from It’s Always Sunny in Philadelphia) shows up as a Medical Examiner who’s also a bit of a necrophiliac, Peralta ignores Boyle’s orders to go after the girl. This is an exceedingly simplistic conundrum, with a fairly unsatisfying gag at its center. The M.E. being a bit too into her work is a little bit obvious, and though Ellis sells it very well, it never really landed for me outside of the thought, “this is the best they could come up with?”

Part of this, honestly, is Samberg’s mugging. At this point I should perhaps come clean and admit that I am not a huge Andy Samberg fan. Though I think SNL is rarely the best showcase for a comedian (case in point: I never loved Amy Poehler on the show, and have never failed to find her hilarious elsewhere), Samberg’s work there was always way, way, way too broad for me, and this on a show that embraces and even celebrates wildly broad comedians. Here, he gesticulates madly, throws out funny voices like Robin Williams still on cocaine, and generally overplays every line he’s given. If I’m being honest, part of my sense of ambivalence toward Brooklyn Nine-Nine comes from my worries that Samberg is going to wear incredibly thin in a weekly format. In three minute spurts as part of The Lonely Island or the star of SNL’s digital shorts, he could be very amusing. But if I have to put up with 22 minutes of his “I’m a tree!” face every week this season, I worry the things I quite like about this show will be dwarfed by a central performance that, to date, just isn’t working for me.

Meanwhile, Diaz is still coming across as too one-note. Where Braugher manages to make Holt’s stoicism into a symphony of subtlety, Stephanie Beatriz’s gruff exterior is starting to feel like it masks an emptiness at the character’s core. This sort of posturing only works if it is compensating for something, and without a hint as to what she is covering up for, Diaz feels light-weight. This is a problem of under-development the show is likely to fix with time, but it doesn’t change the fact that, where we’ve seen Terry and Boyle show dimensions to their narrow character traits so far, Diaz seems to be exactly as narrowly conceived as she was in the pilot.

“M.E. Time” feels slight in the areas it needs to be weighty, and delivers great heft in a story that barely qualifies as a subplot. I’m not willing to go so far as to call this a flaw, but it is a strange state of affairs when the episode’s main story feels airless and short on laughs while a runner heavily dependent on cut-away gags delivered my biggest laughs of the night. The show is moving in the right direction by developing its supporting cast, but there is no indication of yet that there’s anything more to Samberg than a child crying out for attention and approval. When that aligns with Peralta, and when its surrounded by funny enough people and jokes, it can work. When he is frozen in a ridiculous position, begging the camera to notice him as a background gag, I worry that the show’s faith in its lead may be misplaced. I truly believe Samberg is capable of more than we’ve seen of yet. I just hope Brooklyn Nine-Nine pulls it out of him before I lose interest in Peralta as a lead entirely.

-“Scully, you can just write ‘I didn’t close any’ on a piece of paper.”

-“That is, without question, the funniest story I’ve ever heard.”

-“Let’s start with the eyes. Were they desperate? Lonely? Did they betray heartache?” “They were brown.” “Do you even want your purse back?”

-“I’m sure the soft drink industry mourns his passing.”

-“Knock knock.” “You can knock with your hands. Saying it is ridiculous.”