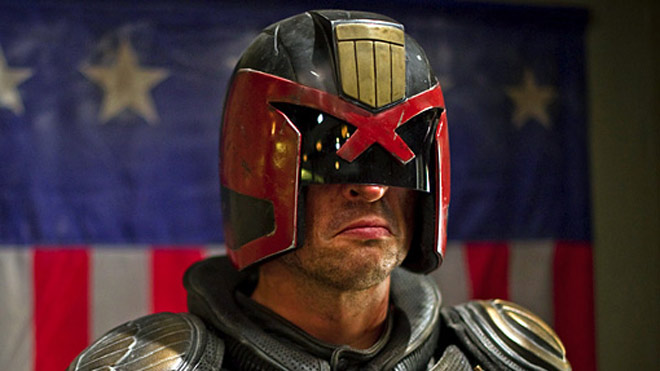 When searching for an instant recommendation for this week, I noticed that I have yet to cover any action, sci-fi, or comic book movies, and watched this one in the hopes that it might satisfy all three counts. So, here’s the deal: I know nothing about the source material comics for this film, and I have never seen Sylvester Stallone’s 1995 Judge Dredd. I cannot speak to this film’s relationship to those works, nor can I say anything about its authenticity, so if those are of concern to you, I am not the writer to talk to. I can also say that I honestly thought I would hate this flick. Like, loathe-levels of hatred. And yet here I am, all ready to recommend it to you fine folks—for a number of reasons.

Here’s the sitch: it is the future, and things are not great. Violence is high, and because most of the world has been destroyed by radiation, people have to live in Mega-Cities, which are populated by millions of people caged together in 200-story tall buildings equipped with all of the amenities of a township, but, you know, dirty and kind of scary. We are treated to this information by a voiceover from Judge Dredd (Karl Urban), who tells us that there are around 17.000 crimes reported daily—including the rise of a new drug called “Slo-Mo,” which makes users feel as if they are moving at 1% of our usual perception of time. The Judges, Dredd included, are tasked with keeping order in the Mega-Cities, and are granted the power to act as judge, jury, and executioner on the spot, which as you can imagine can sometimes escalate quickly.

With all of this information on hand, the story gets rolling: Dredd is tasked with taking trainee-judge Anderson (Olivia Thirlby) out in the field to assess her abilities. Even though she has failed all of the tests that other recruits would have to take, her psychic abilities, gained as a reaction to radiation, give her a lot of use and potential. She and Dredd respond to a call from Peach Trees, one of the towers, where three bodies have been dropped from the 200th story into the atrium. They notice that the bodies had tell-tale signs of using Slo-Mo, and they track down the drug den in Peach Trees and, after shooting a few drug dealers, they arrest a dealer named Kay (Wood Harris)—and Anderson is able to read his mind to see that he is behind the deaths. As they try to leave, the tower’s security system is locked down by the head drug dealer and the overlord of the building, a menacing big bad named Madeline Madrigal, but better known as Ma-Ma (Lena Headey). She sets a price on the Judges’ heads, and the residents of Peach Trees set out to capture Dredd and Anderson.

And here are the many things that make this movie so wonderfully watchable: The first is the story. It is not terribly complex, but you know, action movie that it is, it doesn’t really need to be overly done. It just needs to be compelling, and it definitely is. The stakes are high, and nothing feels repetitive. There are a few plot points that, if I were going to be nitpicky, I might argue are not really all that original, but the setting of this film makes them at least feel fresher than usual. And this freshness is really enhanced by the visuals of this one. It is stunning. There are a ton of special effects that are deployed in really interesting ways—it isn’t certainly shooting for realism, and I think that is what makes them work. Everything is beautiful (especially the Slo-Mo sequences) and looks a bit cartoonish, but in a way that totally works. If you are looking for reality, well, I guess the plot alone should’ve tipped you off that this wouldn’t be your bag.

But here’s what really got me: Sure, Karl Urban is great. He is robotic (almost comically so), a perfect trained judge who knows his job and executes it to the letter. But it isn’t even really about him—this movie belongs to Anderson and Ma-Ma. Both of these characters answer some of the complaints about female characters in action movies (and a lot of other genres, as well) by giving us a hero who is both strong (and not just in the ass-kicking way, though she can be that too) and vulnerable, without that being really counted as a weakness. In fact, her psychic abilities are her primary strength, but they can sometimes be used against her—and interestingly, the thing that makes her strong is also the same thing that killed her parents and put her into the judge program in the first place. She is a fully rounded character with depth and complexity, and with strength that goes beyond the physical, and Thirlby is wonderful in the role. And with Ma-Ma, we are given one of the best female villains I have ever seen. Her sexuality isn’t her weapon (though, of course, part of the way she earned her reputation was by separating a man from his…package…with her teeth), and Headey plays her with all of the menace and slow-burning rage of some of the most iconic villains I can think of. She is smart, capable, and absolutely a terror, and the movie doesn’t really focus on the fact that these are women—they are just great characters. There has also been a tendency in this type of movie to resort to rape as the greatest threat to women (I’m looking at you, Riddick. And, you know, a lot of other movies…), and while that threat is bandied about at points, especially by Kay, not only does it thankfully never come to pass, but Ma-Ma immediately removes it from the one place where it even has a possibility. I’m five minutes away from saying that this movie is feminist. I know, right? I wouldn’t have thought it either.

It is also pretty violent, and from what I can tell, this is what separates the really glowing critical reception from the audience reactions. The violence can be over the top, and I should’ve made a body count just to see (maybe I’ll try that on my next viewing, because I definitely will be watching it again). It really doesn’t pull any punches, so if excessive bloodshed isn’t your thing, then stay away. This one was definitely a critical darling upon release, but never really got a foothold in the theaters, which is too bad. Honestly, if more action movies were like this one, I would probably go see them. It has all the things you want in an action flick: big explosions, lots of shooting, complicated set pieces, and a terrific scoundrel—and more than that, it is smart, funny, and gorgeous. Like I said, I have no idea how it holds up to the original or the source material, but it stands alone pretty damn well.

This one has a lot of things to like: Adam Scott, J. K. Simmons, Brittany Snow (ok, you might not like her, but I think she is great), a small supporting cast of mostly nobodies, and it is written and directed by the guy who brought us Rashida Jones’ Celeste & Jesse Forever (again, this one might not work for you, but it was a big draw for me). Caleb Sinclaire (Scott) picks his brother Peter (Alex Frost) and his college girlfriend Emma (Snow) up to bring them to his estranged father’s (Simmons) home for a visit. Caleb tries to warn Peter not to get too involved with Emma, and then he ends up falling for her right along with his brother. It seems like an interesting story, but I cannot even begin to describe how hateful it is. There is very little to like here, except for some interesting direction choices and some stellar acting, but that’s like saying that Hitler was a great rhetorician if we could only overlook his messages. Caleb is violent and disgusting, and hell-bent on taking everyone down with him—it is mean-spirited, and one of the worst ways I could think of to spend two hours. I can honestly say that if you need a greater appreciation of Adam Scott’s far-reaching talents, though, then look no further; it is a testament to his abilities that he can embody Caleb so fully (and make you hate him so, so much) and then go on to play the nerdy sweetheart of Pawnee, Indiana every week.