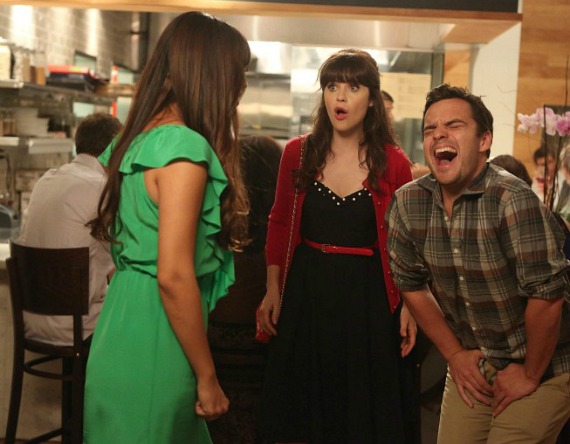 This week’s New Girl felt like a necessary evil. Schmidt’s scheme of dating two girls at once had to come to an end soon for the good of the season – and Schmidt. Unfortunately, I found the episode came up short on laughs, possibly because Nick and Jess were relegated to acting surprised/angry while Schmidt was coming to pieces. And yes, Winston was again insane, but the episode cut and ran as soon as a real character moment was going to develop as he sat alone in a restaurant, holding seats for two couples. Maybe he’d be better off staying at home with that cat he stole.

Max Greenfield still has masterful (I guess I’m throwing that word around loosey-goosey, but so what) control over the Schmidt character and he plays anxious well. After lying to CeCe on the way to Pico – the impossible to book restaurant – it was clear Schmidt’s time was up. Schmidt tells CeCe that he’s been losing his mind because Nick’s been cheating on Jess, and I’m just thankful that more comic misunderstandings didn’t result from this lie, carrying over to multiple weeks. After seeing Nick take multiple shots to the groin from CeCe, Schmidt fesses up. As predicted (and what makes sense), CeCe and Elizabeth break up with Schmidt, hopefully sending the show in a fun direction. Sad Schmidt + having to win CeCe = potentially fun stories. I’m also glad the show dispensed of this storyline because the longer it continued, the less I was willing to give Schmidt a break. I don’t need him turning into a monster, I need him to be the guy you tell to the put the dollar in the douche jar. The “dating two girls at once” plot felt so cliché, it’s likely a blessing that it’s been put to bed.

Nick and Jess felt pushed aside this week, only serving as spectators to the train wreck that was coming to its conclusion. Nick’s inability to lie was one of the few gags this week that landed, though there wasn’t much left for him to do. It’s almost as if everyone was Winston this week – observers with the audience of what was going on. There wasn’t much room for Jess, Nick and Winston as Schmidt’s total collapse was the focus.

After Schmidt confesses, he’s obviously dumped by both CeCe and Elizabeth. If delivering a pie in the face is Merritt Wever’s send-off, it would be disappointing, but not surprising as she’s busy winning Emmys on another program. After “Double Date” New Girl has the chance to get going in a more interesting direction, hopefully one where Schmidt doesn’t look as cruel, Winston is more human, and Nick and Jess return to the spotlight.

-Shots to the groin are always funny, but that Nick’s groin shots were among the highlights was a bit disappointing.

-Winston and that damn cat, there’s a sitcom there, an insane sitcom.

-Nick and Jess, they’re together and they haven’t really dug into that too deeply, but it’s definitely coming.

-Schmidt vows to break up Nick and Jess as revenge, I though Schmidt was genuinely apologetic for what he did – why’s he being petty? Meh, whatever. Nick in the helmet dancing, somebody make a gif of that, please.

-Also anything that turns Nick into more of a cranky old man is a good thing – this week, his slow driving.