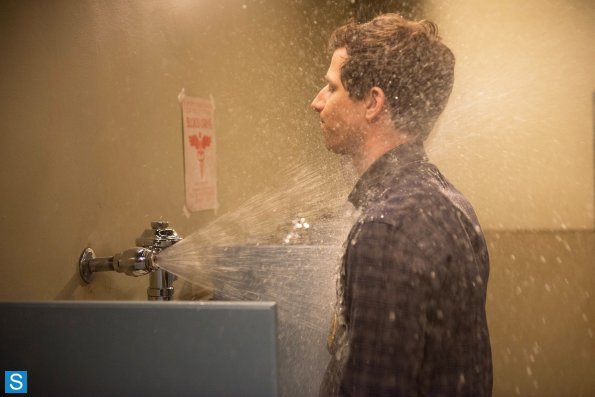 Early in a show’s run, testing the waters in a variety of ways is crucial. Though “The Slump” gives us several stories we’ve seen before elsewhere, it is interesting for the ways it is testing the waters already. The A-story throws Peralta off his game, a theoretically ripe opportunity to examine and deepen his character. The B-story throws all the ladies together to recruit at-risk youth, and to bounce off each other in ways the show hasn’t let them before.

Peralta’s coming down with a case of the yips would work if it actually added a dimension to his character, but I’m not sure that it does. We see Peralta failing to catch bad guys in a bunch of particular moments and then being frustrated. But Holt gets him to shut his mind off for long enough to reboot and he cracks a case. This story actually gives more depth to Holt, who gets to show off a fun side while he messes with Peralta, than it does to our hero, who mostly gripes until someone else solves his problem for him. Throwing a hyper-competent character off his game is often a great chance for the character to learn something about themselves, but Peralta is still too conceited to see beyond his own ego, and that means that, unless Andy Samberg getting soaked with urinal water is your cup of tea (and I imagine for a lot of you, it is) the A-plot doesn’t offer a whole lot this week.

The B-plot, though shows Brooklyn Nine-Nine has a deep bench from the start. Diaz and Santiago are tasked with recruiting at-risk youth for a Junior Police program aimed at getting kids off the streets and out of trouble, and Gina proves helpful in getting the troublemakers on board. Peretti’s work as Gina largely saves this storyline from predictability as her “be mean to the kids” routine actually devolves fairly quickly to her doing an interpretive dance to Christina Aguilera’s “Beautiful. It’s a very funny moment, and the storyline in general uses Peretti’s deadpan absurdism well. Instead of going to the emotional well when the show reveals Gina was actually in the program as a kid, it immediately undercuts this with a frank, “Mhm. Yep. Does not work.” It is a perfect button on a very solid subplot.

Meanwhile, Terry Crews continues to be Terry Crews around the edges of the show, and while I would like for him to eventually have a meaningful interaction with any other character, watching him try and fail to build a dollhouse tonight was very funny stuff. The character is fairly one-note so far, a hyper-masculine guy with a soft center, but it’s a note Crews hits very well, from his Scary Terry screaming “This is taking too long! I’m going to miss the farmer’s market!” to his increasing frustration that his “man hands” and “man mind” can’t manage to put a dollhouse together for his kids. This is a sweet plotline slight enough to not wear out its welcome, and funny enough to let how one-dimensional Terry is slide for the moment.

“The Slump” is a mixed bag in terms of character work. Mostly, everyone who isn’t Gina and Holt just repeats things we know about them already (Peralta has a huge ego, Santiago is desperate for approval, Diaz is tough, Boyle is divorced) and doesn’t seem to have gained any depth three episodes in. This is a funny episode of television, though, and this early in the game, that is enough. There’s no way Brooklyn Nine-Nine could develop all of the characters overnight, and the progress they made with Gina and Holt this week leads me to believe we may be seeing greater depths from others soon. Which is good because Peralta and Santiago’s notes are starting to grow a little stale for me already, and the show is less than an hour in at this point. If the laughs keep coming, I’ll let a lot slide, but eventually Brooklyn Nine-Nine needs to stop playing off of stock-types and Andy Samberg’s stock type of comedy and start developing the people at its center.

-“Francois Truffaut’s Breathless.” This is a film geek’s only joke. As readers of my feature Riding The Wave already know, Godard directed Breathless. And it is not a cop movie.

-“Damn it! This is Jeffrey Dahmer’s corduroys all over again!”

-“Wait. Before you say anything, I want to guess what happened based on your face. Someone died. You won a prize! I’m not getting better at this.”

-“Be more articulate when you speak to the children.” “Yes sir. I will make better mouth.”

-“Ok, so the suggestion to beat is get married and then divorced.”

-“We have a black president. Why can’t black people sell drugs?”

-“Actually, it was quite violent.” “Man, girls are so scary.”

-“What kind of castle has wheels?”