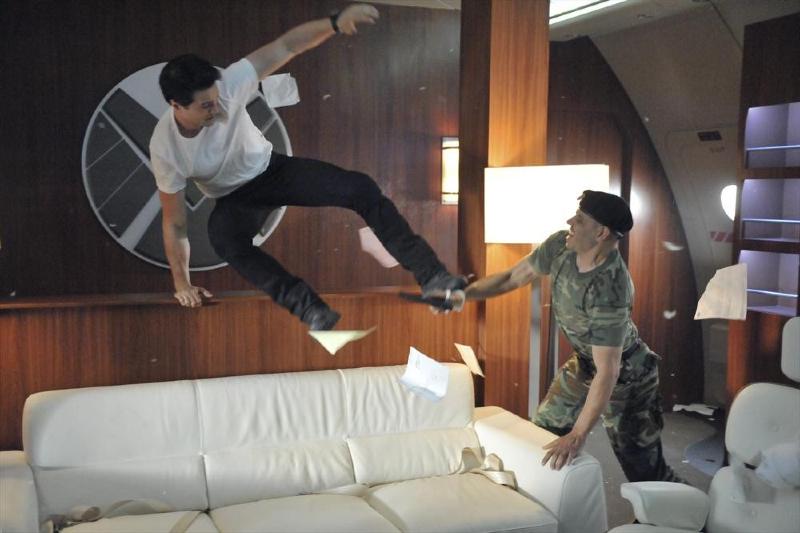 When Dollhouse began in 2009, the character of Topher rang false to me. He felt more like a thinly sketched idea of a tech-geek than a living breathing human, and his sense of humor had the feel of a sociopath who had learned to mimic Xander from Buffy the Vampire Slayer. Over the course of that show’s run, he came to be one of my favorite characters, a complex, funny character with a strong arc that had me emotionally invested. Just as show’s as a whole often come together over the course of their first seasons, individual characters tend to find themselves as the writers match their conception of the character with the actor’s performance and both writer and actor figure out where the character is and where it is going.

This is a long-winded way of saying, “it’ll get better, probably,” which is my feeling once again after the second episode of Agents of S.H.I.E.L.D.. Every character felt incredibly stiff tonight, mannered to the point of coming across like automatons, and, more disconcertingly, never quite sure how to deliver the patter that very much wants to be the cornerstone of this show. Agents of S.H.I.E.L.D. wants to be a fun, funny hour of television every week, but so far, its showing the strain too much for me to completely buy into what it’s selling.

Agent Ward is a hard ass who works alone, and the cracks in his exterior tonight feel less earned than imposed. Brett Dalton sells the “cold badass” part of the role, but he hasn’t yet figured out how to play Ward’s sarcastic side, and his emotional scene with Skye falls mostly flat. Similarly, Simmons and Fitz are both lively characters in a single dimension so far. These two feel like each will probably be the center of an episode at some point and may coalesce as something more than fast-talking foreigners who are funny because “aren’t geniuses socially awkward?” but until then both feel like stock types more than people.

Where all three of those characters have problems of performance as much as problems of writing, Agent May seems to be almost exclusively a problem of writing. The show is so focused on the mystery behind why this expert agent doesn’t want to be in the field that it is forcing the questions more than the person we would need to care about for them to matter. But Ming-Na Wen is already proving to be a potential asset with an excellent deadpan delivery and the ability to convey a lot with her silences. When the script backs off a little bit, I imagine Agent May will become a much more worthwhile character.

Even the two who felt most alive in the pilot seem more stilted in “0-8-4.” Coulson meeting a former lover is the sort of thing I would have expected the show to have fun with, but Clark Gregg feels a little lost there, and he has zero chemistry with Leonor Varela’s Camilla Reyes. Similarly, Skye has an off night, mostly wandering around reminding everyone watching that she’s the new girl.

“0-8-4” seems to be serving the all important task of turning this rag tag bunch of misfits into a team, but this is a story that’s happening before the show has let us come to care about any of the characters that make up this team. The case of the week, which finds the gang tracking an unknown object to a temple in Peru, escaping some rebels, and then getting their plane hijacked in the most predictable betrayal I’ve seen in a while, is serviceable enough. The actual plotting of it is pretty terrible, but as a set piece delivery device, it gets the job done. We get to see a shoot out in a jungle, where Ward gets to pull out some cool S.H.I.E.L.D. tech, and the extended climax on the plane, while completely denying physics, is a lot of fun. In terms of action “0-8-4” is reasonably effective. It’s when the punches aren’t being thrown that the problems are pretty obvious.

But again, this is early in the show’s run, and my problems with the characters being underdeveloped are exactly the sort of ones that will be rectified with more time for the show to find itself. Right now Agents of S.H.I.E.L.D. is figuring out who its characters are and what kind of stories it wants to tell. So far, its characters are cardboard cutouts and the stories it wants to tell are mad-lib versions of your standard espionage show with some comic book element thrown in so we all remember this is a Marvel show. That this episode was written by Jed Whedon, Maurissa Tancharoen, and Jeffrey Bell, the three showrunners and veterans of previous Whedon shows, does not inspire the greatest amount of confidence. I expect more from these names on an episode, though I am willing to forgive a misstep since second episodes can be very hard to do. “0-8-4” has to basically repeat the pilot and reintroduce the characters while telling an exciting and interesting story. It managed all of that except the “interesting” part, and for the moment I am willing to wait and hope it will arrive. This isn’t really a better episode of television than the pilot, but it isn’t worse either. It is watchable television, but there isn’t much here to hint at transcendence. If this is the show Agents of S.H.I.E.L.D. is going to become, I will find myself distinctly underwhelmed. So let’s hope next week gives us hope for the future, because there is greatness buried somewhere in this show just waiting to be discovered. Or, perhaps, discarded in favor of the widest possible audience.

-Can we all agree the internet won’t break if I drop the periods in S.H.I.E.L.D. going forward? I might lose my mind otherwise, and I think you all understand it is an acronym.

-“Imagine what she’ll do with these resources.” “I am. That’s what I’m imagining during this frown.” This is a good line that Dalton just doesn’t manage to sell. He is my biggest worry at this point in the show’s run, a central figure that feels completely empty, and a near-lead performance that comes off as wooden. If there’s a Topher in this cast, its Ward, and I hope I’m proven as wrong here as I was there.

-“Forgot I was working with The Cavalry.” “Don’t ever call me that.” Because BACKSTORY, guys.

-“You’re having a mid-life crisis.” “It’s more of an after life thing…”

-“They don’t need me. They need time.” “Time is not on their side.” “Yeah, but they have something better. A common enemy.” The idea of a common enemy bringing people together is something Whedon returns to again and again, and one of the reasons the climax to Avengers works for me, where I’ve heard complaints that the heroes working as a team feels too rushed. I don’t believe this cast is suddenly bound together as a team, just that they learned tonight that they can do good together.