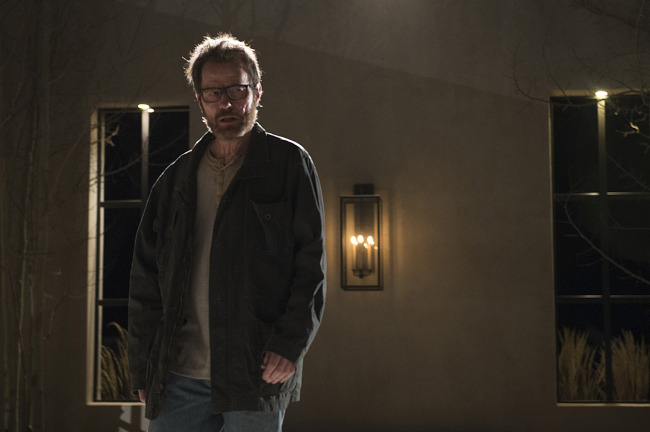 Five seasons ago, Walter Hartwell White received a death sentence. After decades of seething resentment, barely contained fury, and settling for mediocrity, he made a choice to live. As his story came to a close tonight, he finally, for the first time, admitted that. “I did it for me,” he tells Skyler in what he knows will be their last meeting. “I liked it. I was good at it. I felt alive.” Again and again over the last eight episodes, people have asked Walt to just die on them, and his refusal revealed his whole quest for what it really was: the selfish actions of a desperate man. Desperate to matter. Desperate to be remembered. Desperate to stay alive.

Throughout its run, Breaking Bad has consistently confounded my expectations, surprising me with twists and turns and shocking me with the ways it further eroded Walt’s humanity. In a way, “Felina” shocked me as well, but mostly in that it delivered pretty much the episode of television I was expecting. There were surprises along the way, of course (I, for one, had not expected Gretchen and Elliot to appear tonight), but for the most part the episode played out how I had guessed. The ricin was for Lydia. The machine gun was for Jack and the Neo-Nazis. Jesse Pinkman lived. Walter White died. For most of its runtime, “Felina” felt like it was running out the clock. A lot had to happen to tie up loose ends, but this show really ended in the desert when Jack shot Hank, or in the White household when Skyler slashed Walt, or at the edge of town, when Walt stepped into that minivan.

Vince Gilligan has said several things about this last season that I think were ultimately right. He said that “Ozymandias” was his favorite episode of the show (and this is where all of the “endings” I just cited occurred). He said Walter White would end the show victorious. And he said that he didn’t think people would be disappointed by where things ended up. “Ozymandias” was among the best episodes of television I think I have ever seen. Walter White got as much of a victory as he possibly could have hoped for. And I am not disappointed by “Felina,” even as I am not floored by it either. I’m not sure I really know how to talk about this episode of television yet, and I am sure that my opinion on it will evolve over time, as I rewatch the show and think about it more. But mostly, I think this was a satisfying end to one of the greatest shows in television history. After years of worrying, I feel ok saying Vince Gilligan stuck the landing, even if he played it just a little bit safe in doing so.

If there’s one thing that feels distinctly un-Breaking Bad about all of this to me, its that in a series where virtually nothing has ever gone according to plan, Walter White’s final act goes off without a hitch. Think of what he must have fantasized about as he made his way from New Hampshire to New Mexico, and you can probably imagine him laying out this episode in his head. His Gretchen and Elliot gambit goes off without a hitch, even though he is using Badger and Skinny Pete as his faux-hit men (and boy, was I glad to see Breaking Bad’s own Rosencrantz and Guildenstern one last time). He is able to slip Lydia the ricin in her Stevia without arousing her suspicion. He manages to sneak past the federal agents guarding his wife for one last goodbye, and even gets to see his son a final time. Though one of Jack’s thugs takes his wallet and keys from him, he manages to get them back without any trouble. His self-made turret works, and every one of the Nazis, save Todd, happens to be in the line of fire. Walt saves Jesse, and as the police converge on him, as he looks upon the equipment he used to create his “greatest” contribution to the world, Walter White finally dies, fulfilled. This is perhaps not the ending of Breaking Bad I had envisioned, because it mostly feels like the ending of the show Walt would have planned for himself.

And yet, there’s something to all of this that makes “Felina” an interesting hour of television if not, perhaps, a great one. In one of the key scenes in the pilot, Walt teaches his class that chemistry is the study of change. So too, of course, was Breaking Bad. The show charted the course of Walter White from mild-mannered chemistry teacher to criminal mastermind. It followed the dissolution of Walt’s soul. Vince Gilligan pitched this series as one man’s journey “from Mr. Chips to Scarface,” and through most of its run, this is exactly what we watched. I’ve never really been fully convinced about that premise for the show, though. Sure, it’s a great way to pitch a series, and I would have bought the hell out of that if I were in AMC’s shoes. But the Walter White we met at the beginning of the series wasn’t a squeaky clean man of morals. He was a husk of a man filled with rage, regret, and a lingering feeling of impotence. He was standing on the edge of a precipice looking for a push. We often talk about Heisenberg as Walt’s alter ego, the Mr. Hyde to his Dr. Jekyll, and while that’s convenient shorthand, it isn’t really accurate. Heisenberg is Walter White, unbound from the strictures of living in a society, set free by the idea that this is his last run. Walter White didn’t change into Heisenberg. He just stopped trying not to be him.

Over the course of the last three episodes, though, I do think we’ve seen Walter White change. This last run of episodes took every last rationalization Walt had away from him, and then sat him in a cabin alone with his thoughts for months on end to really and truly think about what he’d done. In Albert Camus’ brilliant book The Stranger, he posits that being an innocent man in prison isn’t the worst possible fate; in fact, it is much worse to be a guilty man in prison, to be left alone in a cell with only your own culpability for company, to be forced to contend with the things you’ve done and what you’re ultimately responsible for in the world. And this week, in his final moments, we finally see Walter White take some responsibility. He admits all of his rationalizations were bullshit, simply justifications for him doing something that made him feel good, accomplished, alive. He tries to do right by his family in the only way he knows how, and in the process, he also implicitly forgives Gretchen and Elliot by finally letting them help him (even if, at this point, he is coercing them to do it). He saves Jesse in that compound, diving on his son to shield him from the crossfire. He offers himself up to his spurned protégé, and finally tells Jesse the truth. It isn’t enough to make up for all the horror he wrought in his own selfish quest for glory and fulfillment. Nothing ever could be. But at the end, before the lights finally went out, Walter White changed. He tried to be better, even if all he was doing was (to borrow one of my all-time favorite phrases from Breaking Bad’s sister show Mad Men) putting a temporary bandage on a permanent wound.

Jesse changed too, tonight. Though I cannot imagine a reality where Jesse rides off into the metaphorical sunset and doesn’t face a harsh tomorrow, he gets a victory tonight, not just in killing Todd, not just in winning back his freedom, but in finally casting off the control of the man he for so long deferentially referred to as “Mr. White.” For the entire series, Jesse has been little more than a pawn in a larger game. He only entered the picture because Walt knew he could manipulate his former student and control him. Ever since, Jesse’s fate has been beyond his control, and whenever he could have chosen to break free, to break out, to break good, he has chosen to remain in chains. Jesse never believed in himself. He never believed in his ability to make decisions on his own. He never truly seized his own agency. But tonight, as he points a gun at Walt and prepares to pull the trigger, he finally takes control. He demands to hear the truth, and unlike his futile plea in the desert earlier this season, he knows he is in a position to get what he asks for. And then he chooses not to give Walt what he requests. He chooses not to spill anymore blood. Part of this, I am sure, is to spite the man who took everything from him. Yet I also imagine part of it is Jesse’s desire to have no more blood on his hands. He isn’t reticent to kill anymore. Even though we see tears in his eyes as he thinks about killing Walt, this isn’t the guilt-stricken kid we watched put a bullet in Gale Boetticher. Jesse has literally just finished strangling Todd with basically his bare hands, and we know him to be more than capable of pulling that trigger. But he chooses not to. He chooses to make Walt decide his fate. He chooses.

So then Breaking Bad really is the story of change, even if not, perhaps, the story we thought we were watching. Vince Gilligan gave us pretty much exactly what we expected in this finale (down to some particularly on-the-nose needle drops, though as I did last fall with “Crystal Blue Persuasion,” I’ll give the man “Baby Blue,” just for how long he must have been sitting on it), but again I feel as if he’s forcing us to contend with our own expectations and what they tell us about the show we’ve been watching and about ourselves. I had the particulars of “Felina” pretty much laid out in my own head (not that they were the only things there, of course. I’m not trying to claim, “I called it!” as some sort of Heisenbergian quest for a legacy), but I hadn’t really taken the time to consider what they would mean. I thought of these events as victories for Walt, a man I don’t think deserves an ounce of triumph or happiness, and they are. But they are, finally, victories for Walter White, not for Heisenberg. They are the triumphs of a man who finally seems to understand what he’s done, and who, after so long, seems willing to admit what Jesse said seasons ago: “I’m the bad guy.” I don’t think the events of “Felina” absolve Walter White for all of the misery, suffering, and death he wrought just because it gave him a rush. I don’t think he’s a good person, nor that he has made amends for all of the bad things he’s done. I just think that, at 52 years old, with his world in shatters and his death on the horizon, Walter White was going to make some changes in his life.