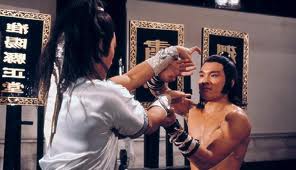 From the 36th Chamber to the Dragon Gate Inn, from the Crouching Tiger to the Drunken Master, Shaolin Sundays is a biweekly examination of kung fu films in all their various formats, from their heyday to the modern era

One of the most important aspects of kung fu as a genre is mythology. Some films take this literally, using as their heroes real historical figures who mastered the arts they mimic. Others show reverence through the training montages that indicate how arcane and obscure the process of becoming a master can be. Yet the most immediately potent kung fu films seem to develop a mythology all their own. The Five Venoms (alternately known as The Five Deadly Venoms) fits into this latter category, telling the story of the powerful Poison Clan and its deadly adherents.

Yang Tieh (Chiang Sheng) is a pupil of the Head of the Five Venoms House (Dick Wei), who upon realizing he is close to death dispatches the boy to track down his five older pupils, each a master of a different fighting style, to ensure that they are using their skills for good and not evil. The masters of each style (The Centipede, The Snake, The Scorpion, The Lizard, and The Toad) wore masks throughout their training, and their identities are unknown, to their teacher and often to each other. If all of this sounds a tad familiar, its because Quentin Tarantino lifted much from the film in the creation of his Deadly Viper Assassination Squad for Kill Bill. Yang heads out into the world as a naïve and bumbling proto-hero, on a quest he barely seems to understand.

What happens from there is, in a word, bonkers. Its little surprise that The Five Venoms has become a cult sensation in the decades since its 1978 release, as in addition to plenty of pretty excellent kung fu, the film has some of the oddest rhythms and strangest choices I’ve seen in a while. In its early stretches, Yang is a bit of a fish out of water, virtually stumbling across one of the masters and tumbling into a plot that involves all of them. This plot, by the way, focuses on the quest to capture hidden treasure from an associate of the Poison Clan. Soon, the film shifts gears and becomes a court procedural after that associate is murdered and the local police focus on two of the masters as suspects.

This courtroom drama (though calling it that is a tad disingenuous, seeing as there are still a lot of punches being thrown throughout) takes up the bulk of the film’s runtime, and delves into some of the gruesome lengths the justice system is willing to go to in order to extract a confession. There’s a long torture scene that becomes a dark mirror to the inventive training sequences kung fu films often feature, and while the fake blood makes this slightly more palatable, it is still a stomach churning sequence.

We then shift, once more, to the team-up the film’s opening foretold. Yang was warned he would need one of the masters by his side to triumph, and while it would ruin some of the fun to reveal which he ends up with (or who each master is), the team up is a blast. Sure, it makes no sense that a novice alone could not beat any of the masters, but that with just one by his side he can suddenly stand against the others, but The Five Venoms isn’t a movie that trades in logic or realism to any degree. Its loose, elliptical relationship with narrative and odd turns are a large part of its charm; though its played fairly straight forward, there’s a sense of whimsy that makes it much easier to accept its shifts in narrative and ultimate lack of cohesion.

The Five Venoms is perhaps at its best when its laying out the mythology behind the Poison Clan. Each master has near-mystical skills and abilities, and while the film doesn’t linger on explaining them any longer than it has to, they each form the piece of a larger puzzle. Like every film we have seen so far in this feature, The Five Venoms isn’t much interested in coloring outside the lines or shading in its characters any more than it has to. The story begins with the quest being laid out, and ends instantly once it is concluded. Along the way we get to know some mystical kung fu techniques that add dimensions to every fight sequence, and we watch as the film diverts itself for long stretches with some very strange predilections. There’s virtually zero weight to this film, but like popcorn at the theater, it gets the job done as a fun, flavorful diversion.

Coming up on Shaolin Sundays: