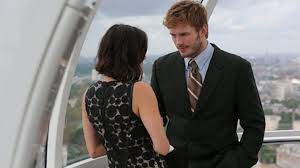 The other day in our Random Pop Culture Question of the Week, I said that I would have ended Parks and Recreation after “Win, Lose or Draw” not because the show is bad now, but because I’m afraid of a future where I won’t love this show. The longer a show’s on the air, the more I fear this development. Parks and Recreation assuaged my fears with its premiere, “London,” which was delivered over an hour.

Written by creator Mike Schur, “London” proved to be a near instant classic. I’m not sure it was all the way there, but it felt like it delivered what every Parks and Rec fan wants in an episode – Ron talks about hating all things not American (and learning to see he’s not entirely right), Leslie proving that she’s a better representative than her town deserves, April shows there’s some warmth in her heart, and Andy and Ben are paired off (always a winning formula).

The episode is paced well and doesn’t dwell too long on last season’s “cliff-hanger” with Diane being the one who’s pregnant. Ron takes it in stride and the two marry in a quick wedding that Leslie can’t help but make a bigger deal.

The Parks gang goes to London thanks to April submitting Leslie for an award for women in government. I sat in my living room saying, “The Simpsons are going to London!” because that’s how important the plot device to get there was. I didn’t care that it was flimsy because the show made the most of their time there. Ben and Andy are charged with trying to pitch their music charity to an uber-wealthy Brit played brilliantly by Peter Serafinowicz, whose childish kinship with Andy acts as the perfect foil for Ben. Adam Scott’s greatest strength has been his disbelief in Andy’s stupidity and the show doubles down here to great effect. Ron is perfectly miserable in London and some of the best moments come where he points out that London ain’t that great. A giant clock? We’ve got clocks in America. In the second half of the episode, Leslie sends Ron on a journey that shows what a great grasp of these characters Schur obviously has. Watching Ron smile proudly and maybe even hold back tears was a moving and funny moment at the same time. Leslie accepts her award, but is frustrated to see how the other women at the event are beloved in their hometowns while she is in the middle of a possible recall, despite all of the great things she’s done for Pawnee. Her speech questioning the townspeople resonated because it acknowledged the ridiculousness of the Pawnee public. Why can’t they appreciate Leslie like we do!? Ultimately, Leslie must accept that it’s a thankless job and there are a few people who do know how great she is, not counting everyone who watches and loves the show.

This week was a great reminder; one I’ve had every single year since the show’s breakout second season. The Parks and Rec crew doesn’t feel tired yet, even though the show is going through some big changes. Anne and Chris are having a baby, and more importantly, leaving the show. Andy got the job in London and is going to have to be away from the Parks crew while he’s working with Serafinowicz (or actually getting jacked to work on Guardians of the Galaxy). So that fear I’ve had about Parks overstaying its welcome hasn’t come to fruition and if this season premiere is any indication, its still got plenty of greatness left in the tank.

-Didn’t go into Tom’s business problems, which I thought was the lowlight along with Chris and Anne’s baby stuff. Great to see Henry Winkler, though he was a bit underutilized I think. Hopefully we’ll get more of him in the coming episodes

-Best part of Anne and Chris telling people about the baby – Jerry talking in disgusting detail about the “miracle” that is child birth and pregnancy.

-Basically everything with Serafinowicz was hilarious, he and Chris Pratt work really great together.

-Ron’s face looking out over the cliffs as he’s found what may be the best place on Earth was truly moving to me and it also showed how great a friend Leslie is, though we already knew that.

-Kudos to Parks for not having another big wedding episode for Ron and Diane, let’s see more of what happens after marriage, let’s not let it be “the end” its so often played as in sitcoms (looking at you HIMYM)