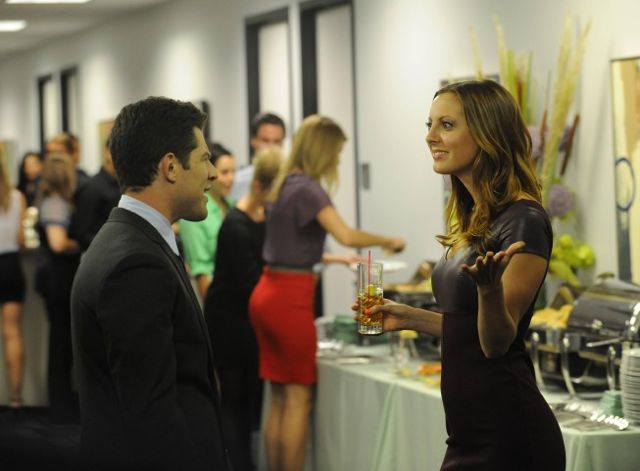 This week’s episode of New Girl provided wall-to-wall relationships, each reflecting the involved characters accurately – for better or for worse. Jess is trying to fit in with a clique of “cool” teachers who seem to run the school, Schmidt is still stuck in the middle between Elizabeth and CeCe and Winston is tasked with taking care of Daisy’s cat and wanting to take things to the next level. Nick finds himself stuck in between helping Jess act cool and keeping Winston from doing anything too insane.

While all three stories felt in line with our heroes, I found each had some issues. I’ve always found that Jess would know better than trying to fit in with the cool kids, but I suppose it’s a reflection on her insecurities. Her trying to make friends with these dickish teachers – drinking, sneaking into Principal Booger’s jacuzz and being a general troublemaker – offered up some laughs, but wasn’t the most interesting part of the story. I enjoyed how it became more of an exploration of Nick and Jess’ relationship – he’s cool, she’s not. Ultimately, he’s all she needs and vice versa. He’s her old man and she’s his old lady. It’s a sweet exercise, and it made me believe more in their relationship, which is important for the show going forward. So while the cool teachers storyline itself wasn’t that captivating, I’d call it a success.

While I found Schmidt spit out some fun one-liners and stories of nipple-licking cats, his sitcom-y mess between CeCe and Elizabeth feels a bit stale already. The two dates at once at a party is a tired trope and I believe that both women are pretty smart and would figure out what’s going on when seeing each other at the same place in relation to Schmidt. How does each one think the other works for the catering company? Yes, I liked Schmidt’s scaled down Don Draper’s office, but I’m having trouble finding his charm the longer this goes on.

As for Winston -- oh sweet, sweet Winston – he’s charged with taking care Daisy’s cat. Daisy has never been much of a character in my mind. In fact, I forgot she existed until she reappeared this week. Winston finds out, when asking to be exclusive with her that she is sleeping with some other guy. Since he’s got the cat, he decides the only fair revenge is to kill that cat. For the record, Lamorne Morris has been and still is hilarious as Winston. It’s just…is he a real character here? He is fucking nuts. I think the biggest leap the show can make would be to solidify Winston as a human being. That being said, all of the different methods and weapons he had designed for killing the cat were amazing. Winston ultimately decides to break it off with Daisy (good!) and keep the cat for himself (bad!). Unlike the premiere, “Nerd” wasn’t constrained by last season’s finale beyond the CeCe-Elizabeth story and it felt like we were back to normal, which is a good thing. Despite its problems, New Girl continues to be one of the most enjoyable shows on television and when we see the gang watch a cat lick Schmidt’s nipples, it felt like home.

-Not sure if Schmidt’s coworker is a villain or doing the best thing possible. He is being unfairly manipulative.

-Winston letting the cat decide his own death is particularly funny to me/insane.

-Schmidt shouting, “Nothing came out!” in regards to his nipples was something I want on a loop.

-Nice to see Angela Kinsey, too bad she was totally wasted here.

-The guys singing “I believe I can fly” to wake up Jess is an instant classic moment. Also a great job by Deschanel waking up. Full team effort in that bit.

-“Sometimes firemen can be women!”