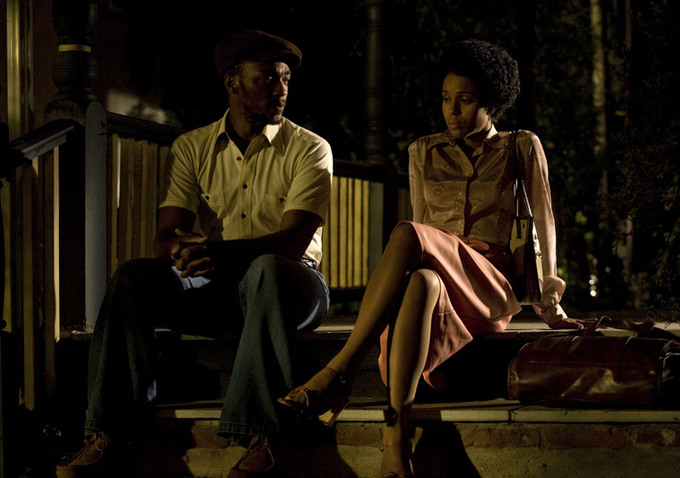 I have to admit something. I didn’t just come across Night Catches Us wholly on my own. In fact, I first heard about it when reading reviews for Lee Daniels’ The Butler, while trying to gauge whether or not I should see it in the theaters or if I could wait until it was available to rent. One of the reviews that I read pointed to writer and director Tanya Hamilton’s independent film as creating the same understanding that cultural paradigm shifts often come from a combination of approaches and channels, but referred to Hamilton’s film as “vastly superior”. One little search told me that the film was currently available on Netflix Instant, and it didn’t take me long until I was sold.

The film begins with Marcus (the incredible Anthony Mackie—seriously, why is he not more famous?) returning to his Philadelphia home to attend his father’s funeral in 1976. A former Black Panther, Marcus returns to find his brother (Tariq Trotter) is selling the family home, and after a skirmish with some former friends, he is welcomed into the home of Patricia Wilson (the seriously talented Kerry Washington, who is pretty wonderful here). Before Marcus left, Patricia’s husband Neil, one of Marcus’s comrades, was killed in a shootout with policemen in retaliation for the murders of two other Black Panthers. While Patricia has moved on in many ways—she has gotten a law degree and set up practice and is dating another (quite wealthy) lawyer—she, like Marcus, is still caught in the past. She still lives in the same home where Neil was shot, and her refusal to talk to both her daughter Iris (Jamara Griffin) and her cousin, the increasingly frustrated and radical Jimmy (Amari Cheatom), about her past betrays her sense of progress (and gets them both in trouble in very different ways). Marcus’ return both unearths his shared past with Patricia and brings other troubles, including a complicated run in with another former Panther, DoRight (Jamie Hector), to light.

There are very few films out in recent memory that approach the Civil Rights movement in this very quiet way. This film is more contemplative, less violent or interested in big set pieces; instead it focuses on the ways that individuals are affected by larger national events, zeroing in on personal tensions built from a larger cultural experience. The film is gorgeously shot (and at its most beautiful when it is the most harrowing—a scene where Jimmy hides from police is illuminated by the flickers of fireflies) and incredibly well acted, and uses some historical footage and animated sequences to interesting and understated effect, and the music (arranged by The Roots) is spectacular. Even if the subject matter doesn’t grab you, the acting and direction will—and if that isn’t enough for you, then watching two gorgeous people like Mackie and Washington throw sparks at one another for an hour and a half or so is definitely worth your time on a rainy afternoon. I have guesses as to why this film didn’t make it much further than the festival circuit (from what I can tell, after its premiere at Sundance, it was released On Demand and then on a few theater screens) but it really is shame that it wasn’t given a wider treatment.

Put Paul Rudd, Emily Mortimer, Zooey Deschanel, Rashida Jones, Elizabeth Banks, Kathryn Hahn, Adam Scott, Steve Coogan, T.J. Miller, and Hugh Dancy in a blender. Set to adorable. Blend until all of the individual cutenesses are indistinguishable from all the other cutenesses. What you are left with is this blandly charming pile of…nothing interesting. It should be just delightful: Ned (Rudd), the hippie stoner loafing brother to his more settled and socially acceptable sisters Liz, Natalie, and Miranda (Deschanel, Mortimer, and Banks), is kicked out of his home (and separated from his dog, Willie Nelson) after a stint in prison for selling marijuana to a police officer. The film grounds Ned’s goodwill and utter cluelessness early and often, and his honesty and attempts to help everyone around him throws their perfectly tied up but delusional lives into chaos. The film wants to be funny, but it falls flat (at best it might elicit a chuckle) and Ned is just so unrealistically hapless that you want to smack him quite frequently, despite the film clearly trying to tell you that you should want to hug him—not to mention that it wraps up so annoyingly perfectly that you already know what is going to happen the minute the conflicts arise. You could do worse (it is inoffensive, certainly) but unless you are hard up, or just want some background noise attached to some pretty, familiar faces, then I would give something else a try.