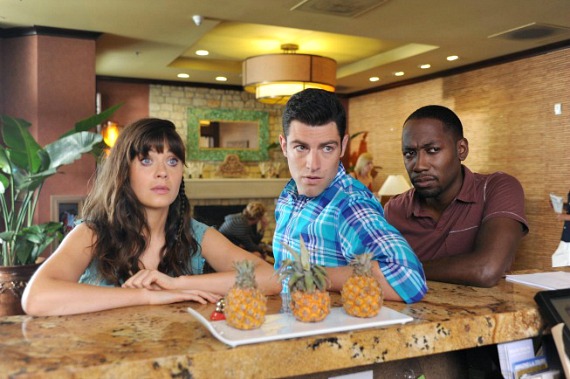 Closing out New Girl’s excellent season two, Nick and Jess were driving off into the sunset, knowing that they were “all in” on a relationship. I think most viewers were with them. The writers quickly recognized the chemistry between Zooey Deschanel and Jake Johnson and exploited it to great affect in maybe television’s best sitcom. But like audiences were saying after another couple ran out of another wedding in The Graduate – what now?

Nick and Jess do not want to mess up this new relationship and frankly, neither do we. Unfortunately in this week’s premier, “All In,” their reaction to their new relationship doesn’t make the most sense. Their fear that living with Schmidt and Winston – their two best friends – would tear them apart feels like a fake problem. I know that it’s a fake problem because it’s easily resolved by the end of the episode – a typical sitcom’s resolution structure. It’s something that seems kind of trivial by the end of the 30 minutes. Why should we worry yet? Why were we worrying about Nick and Jess realizing their relationship can survive hanging out with Winston and Schmidt? We love those guys!

To escape the prospect of the their old lives messing up the new relationship, Jess drives Nick to Mexico and they find paradise to be appealing for only a short period of time before getting in trouble with security at the resort they crash. When Jess calls for Winston and Schmidt, she realizes that they’re family, confirming something we learned at the end of episode one of season one (Winston wasn’t even there yet!).

The bulk of the laughs this week came between Winston and Schmidt. I’ve always found Winston to be underutilized, mostly because his relationships are rarely given much weight/screen time. However, we learn of his puzzle “prowess” and that he’s colorblind. Never have I laughed at someone learning about one’s color blindness. What color is Kermit – Brown! Then what color do you think you are? His stare off into the distance was perfect.

Along with Winston we’ve got Schmidt working his end-of-season issues out. This time he has to choose between Elizabeth, his girlfriend from college, and CeCe, the full-time cast member who we all know actually belongs with Schmidt. While the inclusion of Elizabeth has helped flesh out Schmidt as a character (find out more in a piece I’m working on about Schmidt – TEASE!) we all know that CeCe will eventually win out. Unfortunately, Schmidt takes the sitcom way out, failing to tell either that they should end it. I’m glad this doesn’t come crashing down this week, but it shouldn’t be stretched much further. Schmidt can be an idiot, hopefully he wises up soon – there’s a good heart in there and he is less drawn to fucking two chicks at once and more concerned with not hurting anyone’s feelings. Though there are definitely some selfish things at play here.

While this episode won’t end up in the classic section of New Girl when it’s all said and done, this felt like a good set up to the rest of the season. However, it wasn’t largely successful at being a second part to last season’s finale. How was the Nick-Jess escape from the wedding resolved? They went away then realized they needed to go home. How was the Schmidt relationship issue resolved? He picked both, not resolving anything. I’m mostly happy that the gang is back together, and Nick and Jess aren’t stupidly taking a break for no reason. Let’s see these two be a couple. I always go back to Parks and Recreation’s April and Andy. They made them a couple and kept them there because it made sense. For the time being, there’s no reason for Nick and Jess to not be together. And I’m glad we’re going to see that play out.

- Basically everything involving Winston this week was hilarious – the colorblindness, his obsession with puzzles and his lying to CeCe was pitch perfect.

- Schmidt and Winston really need more time together – Schmidt pointing out Winston’s failure at puzzles and getting him to lie to CeCe were also highlights.

- Nick just has a way with kids, threatening to strangle a kid to death on the beach so he could get his bracelet for Jess. A true romantic indeed.

- Nice job by Winston saying he stole CeCe’s underwear to sew into his own underpants – great lie.