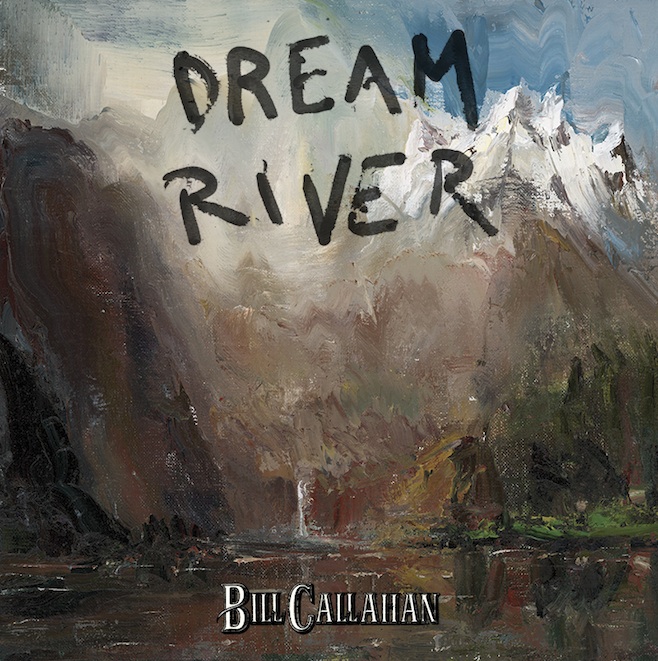 The career of Bill Callahan has always seemed to be, in some sense, whittling down the edges, searching continuously for the core. Early in his career, he obscured himself within the name Smog, but since beginning to go by his own name, he seems to be increasingly reducing ancillary elements, searching for the diamond-hard center of his soul. He creates sonic landscapes, but never feels the need to overcrowd them; their sparseness is part of their beauty, and the room he provides allows listeners plenty of space to settle in and to live within the music.

Callahan paints on a canvas of silence, but he does so with purposiveness—every sound added matters, every lyric contains a world and a worldview. On his last album, 2011’s Apocalypse (which was one of my favorite albums of that year), he seemed to be confronting his views on America, on the abyss, and on his own personal end times. He lays out his goals for Dream River on the beautiful, twangy opening track “The Sing,” where he references Marvin Gaye and whale songs, speaks of his own reticence to engage, and makes alms to “giving praise in a quiet way.” When Callahan sings “the only words I’ve said today are ‘beer’ and ‘thank you,’” you believe him, but he’s also relating more than just an anecdote about a quiet day. He’s allowing listeners into his entire conception of the world. As the song ends, he admits “we’re all looking for a body, or a means to make one sing,” and it is both tragic and true.

“Javelin Unlanding” is fast-paced and layered, by comparison. It hearkens back to days when Callahan was more interested in rock folk, but it also plays with flutes and bongos, with country twangs and funky licks. When Callahan accelerates, he casts a spell, and “Javelin Unlanding” is a melodic thrall to get entwined within. “Small Plane” is a dreamlike rendition of Callahan’s efforts to fly a plane, but it becomes a meditation on control and finding a direction. For many bands, the car is the perfect metaphor for existential agency, yet it makes perfect sense that the plane would appeal to Callahan; he is not content to move in two-dimensions, he needs room to expand, to deviate, and to find his place in a much wider space. His tiniest lyrics contain oceans of meaning, and when he plaintively claims, “I really am a lucky man, flying this small plane,” it is an affirmation of the miracle of life itself, wrapped in the humblest possible trappings.

Closing track “Winter Road” is an ethereal, frostbitten conclusion, gorgeous and sad, and packed to the brim with Callahan’s quiet, dry-as-gin wit. The canvas Dream River is painted on may be smaller than the wider grandeur of Apocalypse, but its details are no less striking, its impact no less shattering and enlightening, as a result. On Dream River, Bill Callahan is painting a self-portrait as an impressionist might, and finding in it details he’d miss in the mirror. “Oh I have learned, when things are beautiful, to just keep on,” he sings on “Winter Road,” and it’s a sentence that doesn’t need a conclusion. Callahan has created something beautiful, and instead of tinkering with it, instead of adding complexity or reducing further, he is just keeping on. Thank God for that.