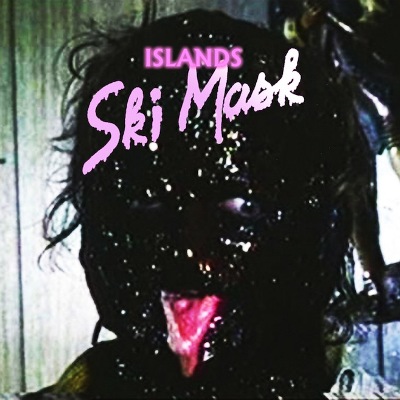 First off, I have no idea what this album cover is supposed to be, but I like it.

Islands are a band that have changed themselves many a time over. To paraphrase what I said in my review of their last album, their first two releases Return to the Sea and Arm’s Way were fairly similar in style and featured violins, synthesizer, and the occasional steel drum to give the songs a lush sound. Then they had the simpler, poppier, and electronic-driven Vapours, only to do a 180 and come out with the mellow, sad, and sincere A Sleep & A Forgetting in 2012. Some fans gravitated to the drawn-out baroque pop of Arm’s Way and Return to the Sea, others found the piano ballads of A Sleep & A Forgetting their best , while others like the synthpop of Vapours. Each album had its following, and it seemed difficult to predict what would come next.

Therefore, it can only seem obvious for their new album Ski Mask to bring together all of their previous styles in an attempt to please the disparate audiences. As Islands frontman Nick Thorburn put it, “This record is kind of a culmination of all the different things we've done over the years. It's basically a melting pot of all those sounds.” However, Thorburn isn’t doing this amalgamation happily. He also said, “This record is really about being angry. For better or worse, this record kind of sums up my experience thus far with being in a band.” And at first glance, with track names like “Death Drive,” “Becoming the Gunship,” “Shotgun Vision,” and “Of Corpse,” you can tell there’s a bit of a violent, aggressive theme to the songs. Granted, this doesn’t mean Islands made a death metal album and Thorburn never comes close to screaming, but you can tell that amidst the indie pop, there’s bit of pent up frustration.

Take the single “Wave Forms” that opens the album. The song starts with Thorburn proclaiming “I won’t ride another wave/and I won’t write another word after today” over a piano part. One way to interpret this is as if he is stating he is sick of following trends and wanting to just stop. The song then goes into a synthesizer part reminiscent of Vapours before exploding into a tropical marimba-backed chorus of “In the golden hour/holding onto burning embers,” which likely is a reference to their earlier albums since it stylistically sure sounds like it. They even makes a reference to Islands’s debut Return to the Sea when Thorburn sings “adrift amidst an endless sea/and there’s nothing to return to.” All in all, it’s a terrific song that shows Islands can still make a clever, upbeat number even if its lyrics give the opposite sentiment.

While the other songs on Ski Mask aren’t as explicit about the band’s frustration, they do continue the trend of masking violent, angry, or otherwise pessimistic lyrics in a hail of pop sensation. Sure they started this trend with “Rough Gem,” a peppy debut hit that was actually about the plight of diamond miners, but they really hammer this theme in here. “Nil” has a honky tonk-sounding piano part that puts “Hallways” from A Sleep & A Forgetting to shame, which contrasts lyrics like “And don’t feel anything, I don’t want to feel anything” and “are you impressed with how depressed I’ve become?” Meanwhile, “Death Drive” sounds a little more sinister in its tone, but its gentle synthesizer part, backing marimba, and piano break take away from foreboding lyrics like “damn it feels good to drive/all the way/in every lane.”

The album isn’t all faux-happiness though. The most appropriately somber song might actually be the single “Becoming the Gunship,” which features a marching, military-style snare drum , a soaring guitar part, and subtle strings to give it a fairly majestic sound. The opening line “when it was dark/I was a question mark/becoming the gunship” allegedly came to Thorburn in a dream, and the cryptic, violent lyrics were hashed out from there. Closer “Winged Beat Drums” also is probably the most stern you’ll hear Thorburn sing, and he brings back the frustration when he says “sing of laying down/sick of playing dead/sick of being sick, think I’m sick in the head.” Ski Mask never gets up-front depressing like A Sleep & A Forgetting, but it does show a different kind of sincerity at times.

While the album is a collection of all the sounds the band has done before, not every song can be an attention-grabbing hit. “Here Here” is a little too mellow to be memorable, and “Shotgun Vision” gets repetitive really fast. And as diverse as the songs are, they do seem to gravitate most towards the synthesizer of Vapours. None of the songs hint that the lush strings of the first two albums will make a comeback, though this might be a byproduct of fewer members and many a lineup change over the years. Ski Mask may not bring much new to the table, and it might not be a groundbreaking record, but for Islands, it might be the windfall Thorburn was hoping for amidst his frustration and despair. And for Islands fans, there are many tracks that are sure to please since there’s something for everyone.