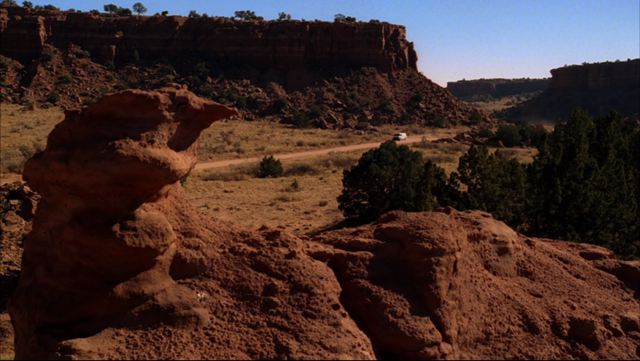 On a primal level, every person craves not just success, not just fame or fortune, but victory. This is why children cheat at board games (and why many adults do too, long after it fails to be socially acceptable). This is why athletes use performance enhancing drugs (in spite of all the other cultural and financial incentives in favor of their doing so). This is why the term schadenfreude exists, not just as a psychological concept or impressive word to throw around at parties, but as a deep dark corner in your soul where, for a moment, someone else’s troubles become your joy. This can devour people; it can drive every decision they make and can allow them to justify anything.

Walter White has rationalized every decision he has made in this series. He has used the same basic pattern I laid out above to rationalize first lying to his wife, then killing to protect his family’s safety, and eventually ordering mass murder to protect his financial position. What he learned to want over the course of the first few seasons of the show was survival. At first, Walt wanted to die. Then, he didn’t care whether he lived. But eventually, he learned that nothing was more important to him than seeing the next sunrise. Yet he’s always known that he wanted to win. It’s what lead him to leave Gray Matter years before the show began, its what drove his earliest actions in the show, even before he realized it. Before Walt decided he wanted to continue living, he knew he wanted to beat whoever was in front of him, whatever the cost. Because he was better. Because he worked harder. Because he deserved it.

This final stretch of episodes has been working to take Walt’s rationalizations away piece by piece. The idea that he is doing all of this for his family is being questioned by the fact that he has torn his family apart, and by his wife who asks why he would go so far and then no further for them. The idea that Jesse was like family to him, that they were true partners equal in every sense, has been proven wrong by Walt’s constant manipulations and finally by Walt’s decision, grudging though it may have been, to order Jesse’s death. We’ve always known Walt was in some sense doing this for the money. Even his initial rationalization was that he wanted to leave something behind for his children. It isn’t greed for financial success that is at the heart of Walter White. It’s greed for victory.

When Walt races out to the desert in the final third of “To’hajiilee,” it is in part to save the millions of dollars he thinks he is at risk of losing. But his desperation isn’t drawn from the desire to save his fortune, just as his insane cackle back in “Crawl Space” wasn’t ultimately about the disappearance of hundreds of thousands of dollars from beneath his house. His desperation in both cases comes from the fact that in those moments, Walter White thinks he has been beaten. When Jesse threatened to get Walt where he lived, I don’t think he ever really meant the money. He meant taking what the money meant from Walt. He meant outplaying him, showing him he’d been beaten. The look on Jesse’s face when Walt gets put in cuffs confirms this for me. They haven’t found Walt’s money, though it’s likely they will. But this is the first time in his entire life he’s seen Mr. White beaten.

This is why, ultimately, I don’t think Hank will die in that climax. From the moment the episode ended, its structure didn’t sit entirely right with me. We build to a crescendo of unbelievable tension, and then we lead to a cliffhanger. First off, from a structural perspective, if Hank was going to die in this situation, it would make far more sense for him to have died in this episode, when it felt inevitable and tension was at its highest. His death was foreshadowed broadly (he even got to tell his wife he loved her), and it seemed like the only way out of the situation. Yet I don’t think Hank can die at the hands of Todd’s uncle and his gang, because in Hank, we’ve seen the rare line Walt refuses to cross to ensure victory. Walt literally gave up everything tonight instead of taking action against Hank. “Rabid Dog” was about Walt deciding to cross what looked to be the only line he had left, but “To’hajiilee” shows us there is one more depth for Walter White to sink to. The greatest sin in many classic tragedies is to spill the blood of kin. Walt thinks of Jesse as family, but last week, he learned he didn’t need to. There’s no way even Walter White can rationalize killing Hank as not killing family though. That’s the only line left separating Walt from the abyss. And I want to see him cross it.

Earlier in the run of Breaking Bad, I often speculated that the only thing that could derail the show was if it lost its nerve, and in this final run, I think that is still the case. I consciously try to avoid guessing where the show is going, both because I think watching it surprise me is one of its greatest pleasures and because the more I consider the endings, the more I inevitably narrow down what I want to happen, and the more I prime myself for disappointment when the final episode ends and this story closes forever. But one of the reasons “To’hajiilee” is probably the most visceral thing I’ve seen on television this year is the way it forces the viewer to contend with what they want from the show (the finale of The Sopranos pulls the same trick, to incredibly divisive ends). Do you want Walter White in handcuffs? Do you want Hank to die? Do you want Jesse to die? How do you want Breaking Bad to end? Its not in your control, but its impossible not to have wants, and its impossible for those wants not to tell us something about ourselves and about the show.

I want Walter White to be irredeemable. I’ve had many conversations with people who want Walt to pull back from the edge at the end, who want him to redeem himself, or sacrifice himself in some way that shows a glimmer of hope that a good man still lies somewhere inside the monster we’ve come to know. This is not what I want from the show, and its never what I’ve wanted from the show. I want Breaking Bad to be the story of that man who takes a few extra hundreds from the bank in Monopoly and rationalizes it to himself until it becomes gospel. His actions escalate because everything he does has a rhyme and a reason. Eventually, he is subsumed by his quest for victory, by his desire to subjugate all of those around him. He crosses line after line and makes up reasons why those lines had loopholes that applied only to his situation, and that if everyone would just listen long enough he could explain. Eventually, this unstoppable force meets an immovable object. Eventually, this man finds a line with no possible loophole. And then he decides to cross it anyway. He needs to win that much.

The first roughly three quarters of “To’hajiilee” were the slowest and least eventful of this half season so far. They were truly the calm before the storm. These final episodes are forcing Walter White to contend with all of his rationalizations and showing each come up short. They are also forcing us as viewers to contend with what we want from this show, with how we want it to end, and with what that says about us as fans of the show and as people. Partially in an effort to keep critical distance and partially because of my generally cautious nature, I’ve tried to keep from guessing more than I needed to, from wanting what the show might not ultimately deliver. But I’ve got skin in this game now. I’ve loved this show too much and thought about it for too long not to want things, not to hope and to question and to reconsider. I’ve given myself over to what Vince Gilligan seems to be trying to get from us as viewers as we head for the end. I’ve rolled the dice. I’ve moved the piece. The only question left is whether I’ll take the money from the bank when everybody’s eyes are turned.

-Todd and Lydia are two of the best characters in all of Breaking Bad a TV show full of them. Todd is so perfectly willing to be used for any end, so eager to please whoever is in front of him at any given moment. He’s a pure sociopath with an utter lack of ambition. He isn’t loyal like Jesse, he isn’t bound to a higher code like Mike, he doesn’t have the great taste of Gale or the reckless abandon of Tuco. Todd is a cipher because that’s what gets him ahead. He doesn’t care what lies ahead, nor who takes him there. All he cares about is gaining the approval of whoever is closest, however he needs to do it. This, I think, is why there’s an odd sexual charge to his conversation with Lydia. He has failed her as a cook and she rebuffs his offer to please her by doing violence to others. All he has left is the possibility of pleasing her in a different way.

-Lydia, on the other hand, was seduced to a life of crime far more like the casual embezzler I talked about above than like Walter White. Gus made her transition from law-abider to criminal so easy, she barely noticed the shift, and her constitution just can’t handle the fallout since his death. I truly wish the show had more time to spend with Todd and Lydia, who are both fascinating and could probably develop into phenomenal characters. But at this point, we probably have bigger fish to fry.

-“One cook. After the job is done.” Yet another line Walt will cross once he’s found the loophole.

-Walt walking silently across the desert toward Hank is one of the best things I’ve ever seen Bryan Cranston do, and this is in one of the best performances ever on television. There is everything in his silence. He’s lashing out at his impotence, rationalizing the situation, ranting like a maniac, and murdering everyone with his eyes, all without saying a word. The entire war Walter White has waged is internalized in these moments, and it is a thing to behold.