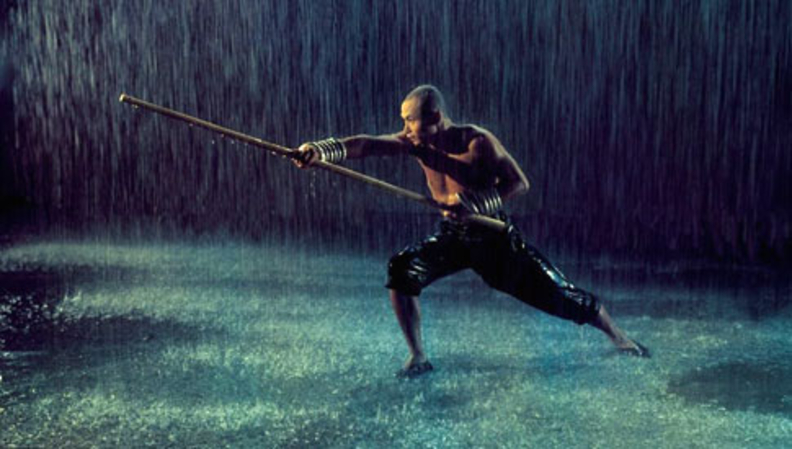 From the 36th Chamber to the Dragon Gate Inn, from the Crouching Tiger to the Drunken Master, Shaolin Sundays is a biweekly examination of kung fu films in all their various formats, from their heyday to the modern era

At some point in his life, every little boy wants to be a Kung Fu master. There is something engrained in our DNA, hard-wired into our sense of self that demands we learn how to punch through wood, break a block with our forehead, and generally become warriors of the sort that can defend our homeland from all sorts of malevolent invaders. When I was a kid, I was a die-hard Power Rangers fan, a karate devotee, and an aspiring assassin of the backyard. I spent countless hours “training” my little brother in various fighting techniques (all of which were on the spectrum between “completely made up” and “something like what I saw in a movie one time” with a little bit of “use the Force” thrown in for good measure) and devoured whatever sort of fight scenes and battles I could get my hands on.

Despite all of this, however, and in spite of my early onset cinephilia, I never really became a fan of kung fu films. Part of it was simple access—the local video store had things like The Karate Kid, but not too many options as far as actual kung fu—and part of it was a reticence to dive into such a rich, complex subculture. The former has been resolved by a combination of Netflix and various other internet streaming and delivery avenues. As for the latter? Well, diving into complicated and obscure pop subcultures is kind of my stock in trade these days. Hence the birth of Shaolin Sundays, a biweekly space where I will try to examine the full breadth of kung fu, from its earliest appearances through its ‘70s heyday and its modern revival. When I began researching this feature, one title appeared again and again as the perfect place to start my journey: The 36th Chamber of Shaolin.

Widely considered one of the greatest kung fu movies of all time, The 36th Chamber of Shaolin is heralded by critics and fans, by Quentin Tarantino and RZA (who named his first album as part of the Wu Tang Clan Enter the Wu Tang: 36 Chambers after the film) alike as a masterpiece. The film is a highly fictionalized account of the life of San Te (Gordon Liu, known to kung fu neophytes like myself as Johnny Mo and Pai Mei in Tarantino’s Kill Bill films), a legendary practitioner of Shaolin martial arts. As a student, San Te is drawn by a teacher into the rebellion against the Manchu government, and when his school is shuttered and his family murdered, he flees to the Shaolin temple, seeking training in kung fu so that he might exact vengeance against his oppressors.

The majority of the film plays out like a long-form training montage, as we watch San Te progress from a novice to a master, advancing through the 35 chambers of the Shaolin Temple faster than any student before. For some, this may sound dry, but for anyone, like me, with memories of made up training regiments and a constant quest to improve, it is fascinating to watch. Each chamber involves the mastery of one task, but every one is interesting and flashy enough to keep viewers interested. Want to watch San Te build up arm strength? Probably not, but when he is doing so by carrying buckets of water of the side of a pyramid with knives attached to his elbows that will cut him if he lowers his arms, it becomes a much more exciting prospect. Such is the set up for every chamber we see: the task San Te must master seems simple enough, but the way he is trained in it is exciting and interesting to behold.

For a movie that spends the majority of its running time showing the training of a kung fu master, The 36th Chamber of Shaolin is shockingly expeditious with the rest of its story. Early on, San Te and a friend make plans to escape their village, and we immediately cut to the two walking down a path in the wilderness, basically saying “I’m glad we escaped.” Once San Te has left the temple to seek his vengeance, no time is wasted before we see him fighting various Manchu soldiers, and the climactic battle literally doesn’t even take time to end. We see San Te gain an upper hand, and move on to the film’s conclusion.

As a bit of narrative construction, the film leaves a lot to be desired, but as a kung fu wish fulfillment device, it is completely effective. Gruff masters, long, inventive training sequences, and drawn out battles with various weapons all abound, to the point where I occasionally wondered if the film was being directed by a six-year-old me (it was in fact helmed by Liu Chia-Liang). There is a deeper message to the film, and, I expect, to the genre as a whole, in the idea that dedication, perseverance, and will can turn a bookish student into a deadly warrior in a few years’ time, but the film is less interested in this philosophical exploration than in watching guys hit each other with spears, swords, and throwing knives. If that sounds like a problem, I might suggest a modulation of expectations. Here at Shaolin Sundays, we will search for kung fu greatness like we might train ourselves to be a master: by punching at the wall of the kung fu canon until we burst through it, triumphant. San Te is an exemplar of many fine qualities, and The 36th Chamber of Shaolin does champion him as its hero. But the film is more interested in how heroes are made than what they do once they are established.

In that way, this film is the perfect entryway into a longer examination of kung fu. As San Te trains to be a warrior, Liu Chia-Liang trains us in how to watch a kung fu film, and in the basic parts that make up a great one. The 36th Chamber of Shaolin is brilliantly elemental, reducing the genre to its barest elements and then executing them all with aplomb. I cannot imagine every film we encounter in this space will have its perfect mixture of inventive training, flashy fight choreography and subtle philosophical and historical resonance, but as a first chamber, this one will do quite nicely.

Coming up on Shaolin Sundays: