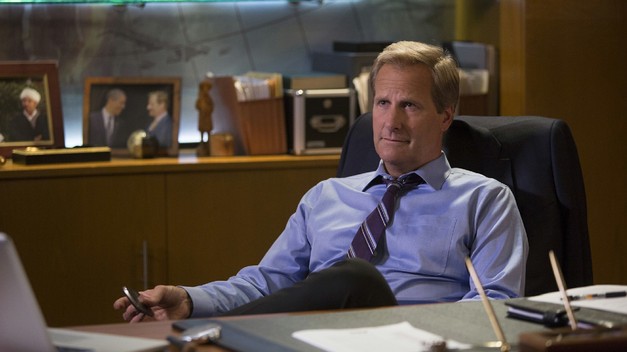 I couldn't say if it's because they left the wishy washy teen drama out this week, but the people behind The Newsroom were definitely on their game this week.

"Red Team III" more or less follows all the blowback from the Genoa broadcast. I was worried when the episode began that they were going to waste too much time repeating everyone's doubts about whether the story was credible, but they seemed to move past it pretty quickly.

I know that we knew from the very first scene of the season we knew that some shit was going to go down, but I still got the feeling that if every scene in the season was laid out in a different order, the unraveling of the Genoa story would have been a huge and horrific twist. I'm not saying that's the way it should have gone, only that in all of the flashback scenes I got this weird feeling like the viewer was expected to be just as appalled and scandalized as the characters, as if we were being blindsided by this betrayal.

I'm pretty impressed with Mackenzie this week. She hasn't been a main focal point of an episode for a while, and so we never see much depth from her, other than alternately being extremely professionally capable and extremely socially inept. Tonight she goes from cold and angry and vengeful to brokenhearted and crying about their mistake. Okay, that sounds weird in a sentence, but it really clicked onscreen. There was a Mackenzie first season who had charm and depth, and I feel like we're starting to get her back.

What I like about Charlie skinner is that he comes in and he's sort of part of the news team sometimes, but then he's off and he has these grand intrigues where he's exposing corruption and violations, and people tip him off about major scandals before jumping off bridges to their deaths. It's the antithesis of the bottom rung worrying about how to juggle work and personal life, and although I don't think it could hold a series up, it's brought in just enough here that I'm always happy to see what Charlie will get up to. That was kicked up to eleven when Shady G-Man tells Charlie he almost had him killed for not preventing the death of his son, but decided instead to ruin Charlie's career and legacy.

In other news, I've finally put my finger on why the characters seem two-dimensional at times, why the protagonist of any given conversation is an eloquent genius, and the opposing arguer always sounds like their entire knowledge of a subject comes from a single Cosmopolitan article. The problem is that Aaron Sorkin is the only writer for The Newsroom. While this does allow him a Dan Harmon-level of freedom and control over overarching themes usually reserved for novelists, it leaves him singularly unable to argue against himself. I'm speaking from admittedly limited knowledge, but I have to believe that in any collaborative writers' room, the episode writer must present his teleplay for an episode to the team, so that they can make adjustments and generally make the script feel more natural. Ironically enough, the major flaw in Sorkin's writing comes from not having a red team.

- How is Don so articulate and sharp during his deposition, but such a neurotic sad sack when he's talking to or about the girl he likes?

- Not much Will the last couple weeks. I can't decide if it's been nice to have a break from him, or if it feels like the last two season of The Office, where the lack of the main character leaves a hole in the show.

-What happened with Will's father? He died, but nobody ever addressed it, and it's hard to believe that Will, who can't resist browbeating just about every guest on his show, put all of his emotions hold because of a couple of news stories.

- I'm not sure what Leona Lansing was supposed to be about in the last scene, but whatever it was, it didn't work. Was she drunk? High? Was this the turning point where the music swells and the news team and their corporate bosses work together on something for once?

-I did like the very end of the episode. Leona telling them to win their viewers' trust back and cutting immediately to credits was stylistically the best ending to an episode The Newsroom has seen yet.