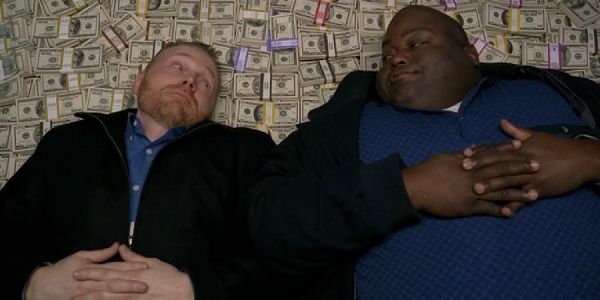 Of course it would come to this. This thought rang in my head throughout "Buried," ceaselessly reminding me just how well crafted the first quarter of this final run of Breaking Bad has been. That the show can be as breathlessly propulsive as it has been in these episodes while still feeling somehow completely inevitable is flat-out astounding. There are moments of harrowing realism between characters tonight that have been seasons in the making, and yet that the show is plumbing these depths still dropped my jaw. "Buried" is, for long stretches, a deeply depressing drama about a loving family torn asunder by the acts of a wicked man, and the show hits every moment of this like it has always been a closely observed family drama instead of an often free-wheeling Grand Guignol crime epic. In some ways, I guess, it has been, and in this episode, that side of the show shines.

"Buried" could easily have just been a piece-moving episode, and from a plotting perspective, that is exactly its function. The climax of last week opened up limitless avenues, and this episode begins to narrow down the story options (as, unfortunately, every episode will from here on out), shifting characters into their final formations for one last move. Part of that piece moving involves revealing various agendas after the fact that Hank knows and Walt knows Hank knows transmogrifies into Hank knows that Walt knows that Hank knows and further into Skyler knows that Hank knows and Marie knows that Skyler knew and so on and so on. Skyler is the episode's most open question, and following her through this episode should dispel any critics of Anna Gunn permanently (that it won't is a sad fact of her function in the show, and no reflection on Gunn, who is phenomenal here). "Buried" gives us some idea of what all of our principle players want, and then just sort of leaves us there, amongst these conflicting agendas and the deep emotional wounds they are causing within this family and the people around it.

At its start, the episode situates us in a standard Breaking Bad position: Walt scrambling for survival against the newest threat, unsure yet how he will survive, but determined to find a way out. This episode could easily have tracked him as he prepared to face off against Hank, and it does a bit, but Walt is backgrounded here for a quieter examination of his collateral damage. We already know what Walter White wants. He wants what he's always wanted. To survive, to stay in control, to preserve his legacy. That makes him, for this episode's purposes, the least interesting character in the piece, and thus, he gets the least screen time in the episode (at least, approximately. I wasn't timing things).

Hank's agenda is similarly clear. He is a single-minded guy, always focused on getting his man, and now that he knows who Heisenberg is, he is more determined than ever to close the case. That determination leads him to rush things with Skyler and bungle his play. With another suspect, he would have known exactly how to handle the situation, but his feelings cloud his judgment, and he ends up scaring her into running away. Or at least, that's how she plays it.

Skyler is the most interesting character in this episode for how much it lays bare her shift in motivations. We know she has become complicit in Walt's crimes, but we've seen how that has made her resent him, and the effect it has had on her mental state. I honestly wasn't sure what her reaction to Hank would be, and what Gunn conveys so well is that Skyler wasn't sure either. But somewhere during that conversation, Skyler makes a decision about where her loyalties lie, and before the episode is over, she is comforting her sick, defeated husband and suggesting that maybe, just maybe, his best course of action is staying quiet.

As I mentioned above, Skyler White has long been an unpopular character on Breaking Bad. Part of this is just the nature of her character. Early in the show, she was a naive roadblock to Walt's criminal enterprise, standing in the way but never quite sure of what. After that, she had to spend seasons in limbo, sickened by her husband but slowly coming to understand him. In many ways, Skyler has the most difficult character arc for the series to portray. She has become corrupted by Walt's actions, but her complicity had to evolve slowly, as did her attitude and her knowledge. For viewers who prefer Walter's mad grasp for power and the theatrical, hyper-stylized narrative that has provided (I imagine this is most viewers of the show, and I would often include myself in that group), Skyler's arc comes across as dull, and the fact that it has to come across this way to work doesn't really solve the problem. Yet "Buried" goes a long way towards revealing the hand that Vince Gilligan and his team have been playing with Skyler all along, as she is given her best chance yet to get away from Walt. Last season, Skyler feigned a nervous breakdown in a failed attempt to save her children from her husband, but now, when she could simply tell the truth (or some close approximation that would absolve her and damn her husband) and have what she wanted, she chooses to shut Hank and Marie out. Skyler's loyalties have shifted over the course of this series. When it began, she was loyal to Walt but did not know what that loyalty meant. Then, when she discovered who he really was, she rebelled. But now, she has come around. As alliances are formed in this final stand-off, Skyler White has chosen where she will stand or fall, and she has chosen to side with Heisenberg. This is a powerful moment for the character and for the show, carried off amazingly well by Anna Gunn (who should honestly consider submitting this episode for Emmy consideration next year).

Because Walter seems, at least for a moment, swaddled on his bathroom floor, a dying man with more ghosts chasing him than he can count, ready to throw in the towel. Left to his own devices, Walter might surrender to Hank in some flawed attempt to preserve the money for his children (how he thinks this will work is beyond me, but I imagine his illness, exhaustion, and panic color his logic). He might just try to make some form of amends before he shuffles off this mortal coil. We saw him trying to shove Heisenberg back inside Walter White last week, and here we see his better angel weakly proposing something Heisenberg would snap at and shut down at a moment's notice. Walter White may have a single better angel still shouting in his ear. But Skyler White becomes, in that moment, the devil on his shoulder reminding him how far he's gone and how impossible it is for him to be absolved.

Last week's climax answered the question left in our minds by last year's mid-season finale "Gliding Over All," telling us when Walter would find out Hank knew. The cliff hanger this week raises a question that is of similar import. In an episode that spends its time unspooling various agendas, there is a notable question mark remaining. At this point, after all he's lost, after all he's learned about the monster he climbed in to bed with, what does Jesse Pinkman want? The answer to that question, and how he goes about trying to get it, may be absolutely vital to the endgame of Breaking Bad.

-This was a piece moving episode that I considered giving an "A-", but frankly, Skyler's arc was handled so well I think it earned the bump up. Call me sentimental or soft if you must.

-Michelle MacLaren, one of the finest directors currently working in TV, helmed this episode, and it is a thing of beauty. The overhead shot of Jesse on the carousel, the dirt's eye view of Walt digging, the barrel POV as it rolls into the hole, the view from behind the phone screen as Walt smashes it--all these are virtuoso moments. Yet MacLaren also nails the small stuff like a pro. Hank looks gaunt and haunted, Skyler is shot in tight close up, Marie's creeping realization is perfectly captured. There wasn't room for it above, but this is a damn fine example of television directing, worth pointing out.

-"I gotta do it man." Then Huell lies on a giant pile of money. Because he is awesome.

-"Have you given any thought to...sending him on a trip to...Belize?"

-Walt doesn't have a better contingency plan than just burying it all in the desert?

-"Is this it?""Does that make you happy?" "I can't remember the last time I was happy."

-"I'll give myself up if you promise me one thing. You keep the money. Never speak of it, never give it up."

-"Please. Please don't let me have done all this for nothing."

-"No? What no? What are you, Lone Wolf McQuade?"
Tags: Breaking Bad
comments powered by Disqus