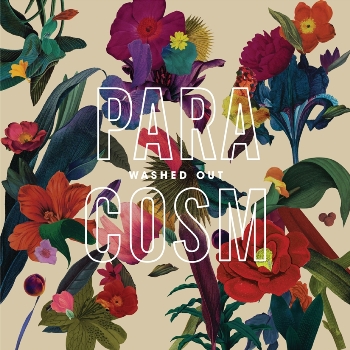 I'd like to start this review off by stating that I have no idea how to properly define chillwave and I'm convinced it was made up on the spot a couple years ago. It topped my countdown of ridiculous genre names (partially because it's nicknamed "˜glo-fi'), and I don't get what qualifies some bands to be in the genre (Neon Indian and Toro y Moi always get the label) while others fall outside of it (is Panda Bear chillwave? Who knows?).

That said, our very own Washed Out, which is the stage name of a guy named Ernest Greene, tends to always fall inside the genre and is seen as jumpstarting the movement a few years ago. His debut album Within and Without came out in 2011, and this was a solid 40 minutes of mellow electronic music marked by minimalist melodies, sound loops (it didn't use samples to my knowledge), and heavily distorted vocals that were usually incomprehensible. While it was really subdued innocuous electronic music, there was still this odd almost dance-music quality to some tracks - songs like "Echoes" had only a three note melody that gave it a trance sound and some of the drum loops sounded like they could have been used in hip-hop songs. Essentially, the album sounded like seedy 90s techno on tranquilizers.

Two years later we have Paracosm, which only maintains the "mellow" of everything I've said above and then turns everything else on its head. The melodies are more sweeping, and everything has a more "full" sound as the instrumentation branches out from electronic-only loops to actual samples of recorded instrumentation mixed together. The whole thing seems to be accompanied by imagery of tropical flora and fauna, which is hinted at with the album artwork and really driven in with the promo video for "Don't Give Up." To get artsy for a minute, it'd go really well with Henri Rousseau's painting style.

Paracosm opens with the aptly-titled "Entrance," which sounds like it was recorded with an aviary with sounds of birds in the background and a minimal melody giving way to one of those classic "lush" sounding harp diddlies and a synthesized choir. This leads right into my favorite track "It All Feels Right," which of all things features an acoustic guitar strumming, Greene's typical incomprehensible vocal drawl, and the occasional bird sound. Although it has a prominent synthesizer melody in parts, the acoustic guitar really shows that this isn't another Within and Without and in the end sounds like a cross between Peter, Bjorn and John and Panda Bear.

Although the 60s sounding psychedelia largely dies down after this track, the rest of the album does have just as rich a sound and kicks up whenever a dull moment seems on the horizon. "Don't Give Up" has a pounding drum beat and a chorus full of clashing synthesizer sounds that give it a slightly 80s soft rock sound. Quite differently, "All I Know" reminds me of the Chemical Brothers or Moby with its rock-electronica blend that is interrupted by an other-worldly sounding synthesizer riff. "Weightless" meanwhile sounds like Cut Copy slowed down to at least half-speed.

The tropical motif comes back slightly in the hand drum beat of "Great Escape," while the opening paradise-like sound returns in the looped harp sample of the title track. Both have the psychedelic synthesizer kicking in as well to give them many layers, and the latter again shows the return of an acoustic guitar to Paracosm. While "Falling Back" has an electric guitar part and the drums somewhat resemble those of a traditional rock song, the last minute of the song with bird noises and a gentle piano playing almost seem more apt for the album. Paracosm closes with "All Over Now," which sounds most like Within and Without with its simple repetitive electronic-based melody.

While the tropical/jungle/paradise of the motif of the album flows in and out, the layered samples of synthesizer and use of actual instruments give it a very dynamic sound that almost makes it sound like Washed Out is a full band. However, the album can fade to background noise at times, mostly due to Ernest Greene's monotonous and reverb-heavy vocals that sometimes take center stage even when they're at their droniest. As far as the lyrics, you can't really understand them except at the chorus, which most times is the track's title, so it's kind of hard to judge whether they add or detract from the songs. Otherwise, the album is a great collection of mellow electronica that definitely brings something new to the table.