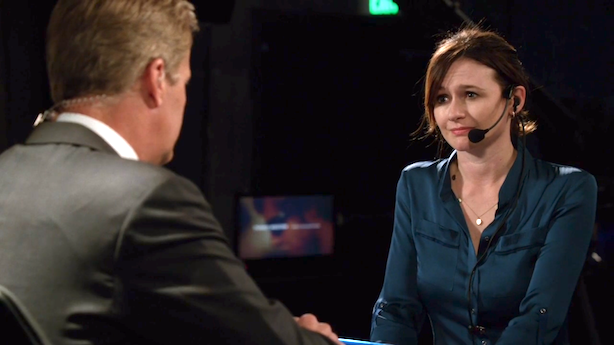 This week's The Newsroom takes place more or less in real time, following a full broadcast of the news team. I'm no expert in Television Theory, but I think this is as close to a bottle episode as there can be in a show that depends so much on current events and a varied ensemble cast. For the few that know even less about television than I do, a bottle episode is the phenomenon where in order to save money on actors and sets, a TV show will take place all in one location, usually with only the main cast, and usually over a relatively short period of time. Sometimes in recent years, and probably here, it's less a matter of saving budget, and more a stylistic choice. It puts emphasis on the relationships and developments between characters, and allows the drama to unfold without depending too much on impetus from outside events.

The driving force behind the progression of the episode is the News Night broadcast. The passage of time can roughly be judged by how often Will goes to commercial breaks, and has his little chats with McKenzie, where he juggles the broadcast with angry twitter messages and a call from his father. While technically the centerpiece of the show, Will didn't really have too much to do. Stressing out over every single person who dislikes him is nothing new for him, and nothing amazing happened during his actual newscast. The only bit of character development I could see was about his relationship with his father, which we don't learn too much about, except that at the end of the episode he finds out that his father died.

I have to say I was pleased that they played the angle that Maggie messed up on cutting the George Zimmerman tape. I often get the feeling that The Newsroom looks down its nose at people, using the benefit of hindsight to pretend like there's this ideal news team that always presents stories fairly and correctly as a matter of integrity. Here, however, Maggie did the same thing that in reality NBC did, which was to cut the recording of the 911 call Zimmerman made in such a way that it sounds like he's pursuing Trayvon Martin because he's black, instead of simply answering questions that the operator is asking.

Don's and Sloan's story didn't seem to fit with the larger plot of the show, but it was enjoyable nonetheless. It felt out of character that she would pose for photos like that, whatever the situation, but I the characters reacted in a very natural and genuine way. I'm not sure I've said this before, but one thing this show does do very well is showing some of the less glamorous aspects of the broadcast industry, which I've never seen other shows do. Maybe because this is the first show I've watched in several years about people who make television, but I don't think I've ever seen another show tackle the trashy and difficult situation of a public icon having nude pictures come out on the internet. Even Studio 60 on the Sunset Strip, Sorkin's previous drama about a Saturday Night Live-type show (think a not funny 30 Rock), only danced as close as a possible scandal involving a drug test with a producer.

There were so many big and small plotlines going on tonight I'm not sure what is going to be important going forward. I'm definitely happy to see that things are finally happening, after half of a season. I'm still on the fence about the season as a whole, though. If they can just keep the kids' pathetic romantic storylines down to a shout, and have some more angry outbursts from Will and some hilarious outbursts from McKenzie, I think everything might be okay.

-I'm a little confused. Last week's episode made it look like Maggie cut and dyed her hair when she got back from Africa because it reminded her of how much the little boy who died liked it. Now it looks like she's already been in a deep depression for quite a while, but hasn't cut her hair yet. Will she suddenly decide to ten months after the fact?

-It also feels a bit awkward that regardless of what happened to her, Maggie is right back playing the victim again. I'm not saying she shouldn't be upset, but why have her roommate blow up on her earlier in the season for being such a drama queen if she's going to spend the rest of the season doing it anyway? Will there be a big apology where Lisa tells Maggie she was wrong, that Maggie really is the center of the universe and she leads a tragic and downtrodden life?

-What was that plotline with the gay teenager coming on as a guest about? I understand the actual news story from the time about the gay teen who killed himself, but this guy came out of nowhere, and every scene he was in I had no idea what he was talking about. Did I not pay close enough attention to the news last year that he should have been familiar? Or did I miss some web series establishing this character?

-I'm not sure I was supposed to, but I kind of liked the shadowy government guy who came in for five minutes and said a lot of things without saying anything, and then left both helping Charlie and making him more uneasy than ever.